The Converted Fringe Tower can be found on our interactive map by clicking on [Elden Ring Map here]. 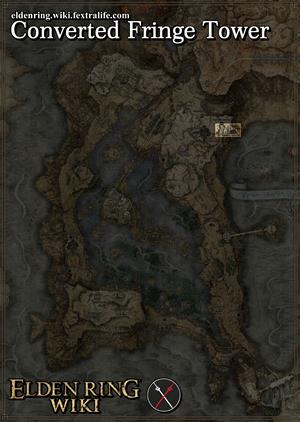 All NPCs and Merchants in Converted Fringe Tower

The top of the tower is sealed by a puzzle. Read the message at the foot of the statue is a hint to solve to puzzle:

"May erudition light the way!"

To clear the puzzle, perform the Erudition gesture in front of the statue while wearing a Glintstone Crown that lights up when you perform the gesture.

Note: The Azur, Lusat, Haima and Hierodas Glintstone Crowns do not work for this.

The room at the top of the stairs will summon a School of Graven Mages, this is the only enemy in the tower, after the fight take the elevator up to get to the chest at the top and retrieve the Gavel of Haima and Cannon of Haima.