From the Erdtree-Gazing Hill Grace, drop into the valley to the E/NE. Follow the left side of the cliff as you ride North and the white fog wall will be clearly visible from the clearing. It is just past a spectral rider enemy, and a giant concealed by a corner. Two Stonesword Keys are required for entry.

Look at the exact location in our [Elden Ring Map here]. 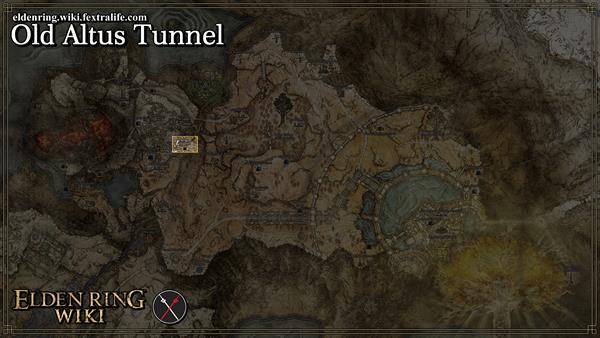 All NPCs and Merchants in Old Altus Tunnel

These tunnels are located southwest of the Bridge of Iniquity in Altus Plateau. The location may be difficult to find due to the large amounts of similarly jagged, rocky hills in the area. The entrance is barred by an Imp Statue which requires 2 Stonesword Key to dispel the fog. The Old Altus Tunnels are a rich source of Cracked Crystals. There are countless amounts of these items found all over the walls and they respawn whenever you rest at a Site of Grace. Be sure to be on the lookout for these if you need them for crafting. Inside, you will predominantly encounter Miners and Zombie Dogs. There are also a couple of Nobles guarding the workers.

From the entrance, check behind the wall on the right for a corpse with 3 Explosive Stone Clumps. Descend the lift to find the Site of Grace. Note that this is the only Site of Grace within these tunnels, but the dungeon isn't particularly long either. When ready, head down the first corridor to find a few barrels and a storage shed on the left. Beware the red barrels marked with a white stripe. These are explosive barrels and can be set off with fire damage. However, you can also use these to your advantage if you have any fire spells. Inside the shed is a Miner and Zombie Dog waiting behind the barrels. Look outside the shed and to the right for a Smithing Stone [5].

Continuing on, you will arrive in a large cave with lots of wooden walkways. Follow the closest one to the right and head up the ladder.  This leads to a room with a second storage shed on the right and 2 miners chipping away at the crystals while a Noble guards them. Take out the Noble first and two dogs should come rushing out of the shed. After defeating them, check the shed for a Boltdrake Talisman +1, which is an upgrade to the original talisman. Check around left side of the shed to obtain Somber Smithing Stone [6].Outside the shed and to its right, you can find Stanching Boluses amongst the crates. In the small alcove right of where the miners were, there is another Smithing Stone [5] behind the barrels. Head back out to where you climbed the ladder and this time, drop down onto the storage shed below to get to the lower level.

Finally, go back to the long ladder and head through the tunnel behind it to reach a fog gate that leads to the dungeon's boss: The Stonedigger Troll. This boss is quite simple and is easy to punish at range if you use your Spirit Summons to distract it. Watch out for its roar which can knock you down, allowing the troll to follow up with a devastating smash with its club. Upon defeat, the boss drops the Great Club hammer weapon and 9,600 Runes.