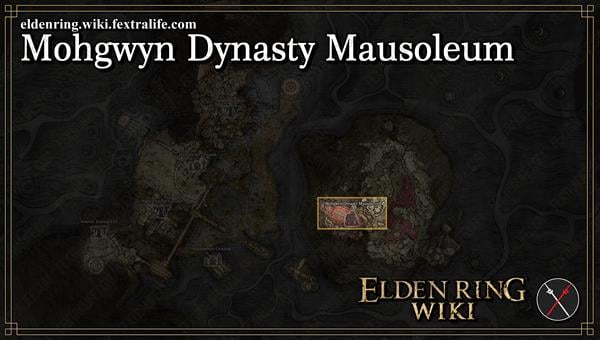 All NPCs and Merchants in Mohgwyn Dynasty Mausoleum

There will be a site of grace upon entry. As you progress through the area you'll come across some Putrid Corpse enemies that you can clear to ignore since there will be a  large hoard of them.  Within the grassy areas there will be some collectable items. Once you climb the stairs to the open area with more corpses, there will be Numen's Rune in the body to your left hanging off the edge.

On the wall side cliff (right) from the main path, there will be a body just in front of a pile of crooked stone tablets. This will contain Smithing Stone (7). Continue ascending the path and clear the Blood Mass in your way. You'll obtain Beast Blood and Stanching Boluses.

When you reach the area where a number of putrid corpses have their hands raised, loot the boulder on the corner towards the cliff edge to obtain a Stonesword Key.

Make your way into the indoor area of the Mausoleum. You'll be facing a Sanguine Noble. Clear him and continue to encounter the Imprisoned Merchant. There are several Sanguine Noble throughout. Approach the large, tall pillar in the center of the Mausoleum to obtain the Lord's Rune. Smithing Stone (8) and Ghost Glovewort (9) can also be looted off corpses and corners when you continue.

Once you exit, there is a pathway that leads to the Dynasty Mausoleum Midpoint site of grace. In the tunnel before this site of grace is a red sign to invade White Mask Varré's world. This suggested to be done before defeating Mohg. Then, you can make your way towards the line of pillars. Just over it, jump over to the narrow cliff edge to loot the Golden Rune (13).

If you come across a small flight of stairs that lead up to a statue surrounded by Albinaurics  and a Sanguine Noble, loot the chest at the base of the large figure to obtain Somber Ancient dragon Smithing Stone. Before ascending the lift, make sure you sit at the Site of Grace on this level. It will be north of the statue. Then walk to the platform perpendicular to the state to take the lift to the next section. Crossing the fog wall, you will trigger a cutscene before you face Mohg, Lord of Blood.

Defeat him to gain: