Gael Tunnel can be found along the western cliffs of Caelid, on the border to Limgrave. [Elden Ring Map Link]

There is a second entrance over on the Limgrave side, but it is initially barred and needs to be unlocked by completing the dungeon from the Caelid side. This entrance contains the Gael Tunnel Rear Entrance site of grace. [Elden Ring Map Link] 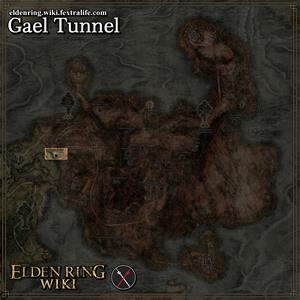 All NPCs and Merchants in Gael Tunnel

If you have entered from Limgrave (not Caelid), there doesn't seem to be a way to open the wooden door from this side. If you have freed Alexander and not gone extremely deep into Caelid, he should be here.

The Site of Grace for this dungeon is found in a very deep pit ahead of the entrance past two Radahn Soldiers. There is no lift to take you down so you will need to do some platforming along the edges of the pit. There is a small room next to the second ledge you drop down to on the left. There is a corpse here with a Somber Smithing Stone [2]. From the Site of Grace, head north through the tunnel archway to a large cavern with wooden walkways. Kill the Radahn Soldier on the right then head down the steps and clear the Miners and Radahn Soldiers on this floor. There is a corpse on the left with a Golden Rune [5].

Head down the steps for more Miners and Radahn Soldiers congregating by the fire and a few more under the walkway. There is a Gold-Pickled Fowl Foot behind some crates in the very back below the walkway. Look to the east for a tunnel leading to another cavern crawling with Land Octopi and a single Giant Land Octopus hanging from the ceiling in the back. There is a corpse below where the giant octopus was hanging from that contains a Cross-Naginata weapon.

Head back into the main cavern and go west to find a soldier kneeling by a ladder. Take him out and then descend the ladder to find another Radahn Soldier and a Miner. Loot the corpse in the center for 5x Large Glintstone Scraps and the other corpse nearby for a Grace Mimic. Continue along to the tunnel in the south to a room with a large wooden gate to the right which contains the boss arena, as well as a smaller wooden door straight ahead. Go through the small door first which leads to the rear entrance of the tunnel as well as a second Site of Grace which you should activate. Head back to the large gate to challenge the boss of this dungeon.

This boss is highly susceptible to magic damage. Use sorcery spells that hit multiple times such as Glintblade Phalanx or Greatblade Phalanx to quickly break its poise and get a critical hit in. Sorcery mains can very easily lock this boss down. If you aren't sorcery focused, however, you will need to watch out for its mad dash attack where it spews lava from its mouth and then dashes around the room, leaving lava trails along the ground that persist for a few seconds. It is also equipped with a very large curved greatsword which it uses to slash in very wide arcs. However, its sword attacks are very slow with a very long wind-up. Take advantage of these animations and get hits in when you can.

Upon defeat, the Magma Wyrm drops a Dragon Heart, the Moonveil katana, as well as 7,500 Runes.