Bestial Sanctum is a Location in Elden Ring. The Bestial Sanctum is found in Dragonbarrow. You can arrive at this location by exploring the northeastern portion of Dragonbarrow through Caelid, or taking a teleporter in Eastern Limgrave, near the Third Church of Marika, after talking to D, Hunter of the Dead and obtaining directions.

The Bestial Sanctum is located at the northernmost tip of Dragonbarrow. [Elden Ring Map Link] 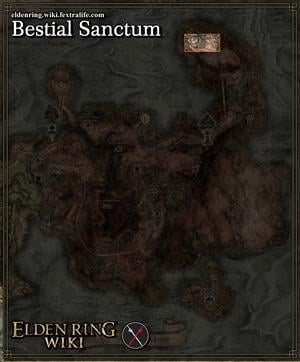 All NPCs and Merchants in Bestial Sanctum

This area is guarded by a Black Blade Kindred, but its defeat is not required to access. Circle around the boss and sneak near the wall up to the door. There is a Site of Grace upon entry to the right-hand side, while the only NPC to be found is Gurranq, Beast Clergyman in the back of the room. The purpose of this area is to turn in Deathroots to redeem the items listed above.