Frenzy-Flaming Tower is typically accessed from the north of the eastern landmass, riding south from the Grand Lift of Dectus. [Elden Ring Map here]

Alternatively, smart use of the jagged rocks north of the Minor Erdtree (Liurnia Northeast) while riding and jumping on Torrent will allow players to reach the Frenzied Flame Village and Frenzy-Flaming Tower without having to go around through the northern section of the landmass. 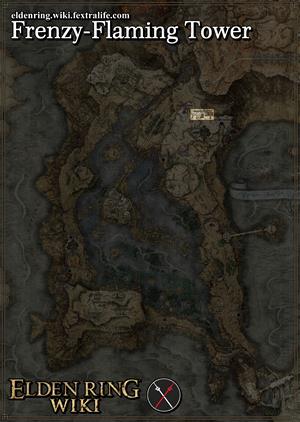 All NPCs and Merchants in Frenzy-Flaming Tower

Above the tower is a repeatedly-burning flame of frenzy, which will increase your madness levels if you're within view of it. You can use rocks as cover during your approach, or use the ravine to the left of the tower to come behind it, and use the Spiritspring to jump up next to it and quickly get inside the tower, which will protect you from increasing madness. There will be a giant rat and three rats inside, which can be difficult in the close quarters, so be prepared. Climb the ladder, and on one level you will find a chest containing the incantation Howl of Shabriri. Continue to the top to find a group of Frenzied Villagers, and quickly kill them to put an end to the flame of madness affecting the area.