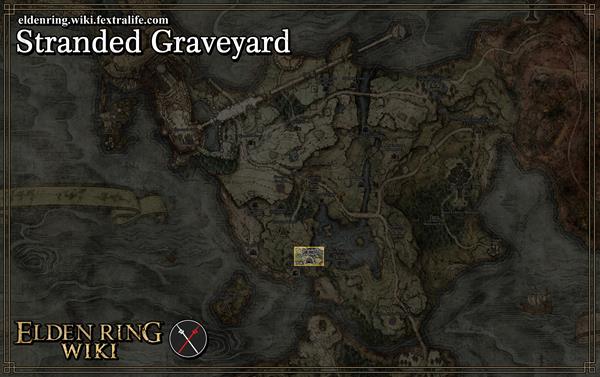 This area acts as a tutorial for players. Players access this location upon dying at the Chapel of Anticipation.  As you resume control of your character, you will automatically acquire x3 Flask of Crimson Tears and x1 Flask of Cerulean Tears, these are mainly used to recover HP and FP. Ahead of you, you will see a ghost of a Commoner that is sitting in a chair, approach it and you'll find a message about the game's optional area for the tutorial which can be accessed by jumping down to the lower level of the cave.

We highly recommend you to go through the tutorial section to better understand some new basic mechanics of the game, regardless of whether you are a new or a veteran player of FromSoftware's games. By jumping down into the pit, you'll first encounter the Cave of Knowledge Site of Grace and will be prompted with a message tutorial on how it works. We suggest that you rest at the site of grace before pushing forward since there are undead and Noble soldier enemies, so you can try out the different combat mechanics such as backstabbing an enemy, using your melee attacks, or magical attacks, and such. The area here is pretty linear and you'll be given various tutorials on the basic combat mechanics of the game.

From the boss arena, head straight and you'll find a corpse hanging by the ledge. You can loot the corpse to find the "Strength!" Gesture. Jump down, and you'll find yourself back at the starting point of this area where the ghost sitting in the chair is. Head up the stairs near the glowing golden sapling and open the door leading to the  Site of Grace. By the archway, there is another body on the right that you can loot to find x1 Finger Severer and x2 Tarnished's Furled Finger.

You can enter Stranded Graveyard from a cave in the south-east beach (can be reached by jumping down the cliff near Seaside Ruins site of grace) to get the Haligdrake Talisman on the ledge behind where you first spawn.

IMP STATUE - You will need two Stonesword Keys for this Imp Statue, one can be acquired early by selecting it as a keepsake in character creation. This is a dungeon within Stranded Graveyard named Fringefolk Hero's Grave that (at this moment) you can try to push through but be warned that it is populated with strong enemies, poison, and is guarded by a boss. We highly recommend that you return to this section later on when you are well-equipped and prepared. If you do want to explore this section, you can find some valuable items here, as long as you are careful and aware of your surroundings.

SKIPPING THE TUTORIAL - If you want to skip the tutorial section, simply make your way up the stairs on the left, near the glowing golden sapling, and open the door at the top of the stairs. Through the door, you'll find an empty room and another set of stairs where you'll find the  Site of Grace.

Depending on your choice of going through the tutorial or not, you will still end up at the site of grace where the Imp Statue is. To officially begin your journey through the Lands Between, head straight, ride the lift to the upper section, climb the stairs, and open the iron door to find Limgrave.