Find the entrance to the Academy Crystal Cave on our Elden Ring Map Here. 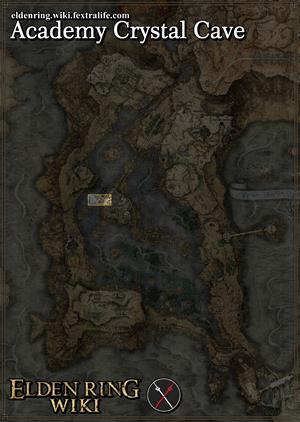 All NPCs and Merchants in Academy Crystal Cave

The Academy Crystal Cave can be accessed by following the Liurnia shallows towards the west of the Raya Lucaria Academy. The entrance is found on the western cliff below the academy, barred by an Imp Statue. Look for the entrance on our Elden Ring Map Here. Two Stonesword Keys are required to dispel the fog barrier. These caves are very dark except for the flashes of glintstone spells cast by the sorcerers within. It is highly recommended to equip a Torch whilst traversing the caves.

Shortly after the entry, you will find the area's Site of Grace. Continue on into the cave and look to the left for a Crystal Cave Moss. This cave is rich in this item so be on the lookout for them if you require them for crafting. There is a Rat with its back turned which you can assassinate or skip if you wish. A couple more Rats lie in the path ahead. Following the linear path, you will arrive in a large foggy cave with many pillar-sized crystals.

There are several Twinsage Sorcerers in this cave, armed with powerful glintstone spells. Utilize the crystal pillars to block their line of sight, as well as their projectiles. At the start of the cave, look for the lone sorcerer facing a pillar and take this chance to ambush him with a critical attack. Beware of a second sorcerer just behind that pillar and the group of three sorcerers approaching from the back of the cave. Weave around the crystals and take them out one by one, mixing in any AoE attacks when you see an opportunity to hit multiple of them. There are two more sorcerers next to each other near the north section of this cave, and one more behind a pillar a few steps ahead.

After defeating all the sorcerers, look for an opening in the northwest for a small room with a cage. You can pick up a Stonesword Key from the corpse in the cage as well as some Budding Cave Moss along the walls. Go back to the large cave area and go east through a tunnel leading to a wooden doorway. Open the door and you will arrive in a storage area of sorts with a Battlemage guarding the doorway on the left. Battlemages are tanky and can take a lot more hits than the Twinsage Sorcerers. There is also a Glintstone Sorcerer patrolling the room. Go through the room the Battlemage was guarding to find another room where a Sorcerer is standing on a raised platform. Defeat the sorcerer and loot the chest in the room for a Rune Arc. To access the raised platform, attack an illusory walls close by (screenshot here) and loot another chest to collect the Crystal Staff.

Head back to the storage area and look to the east to find the fog gate leading to this dungeon's boss: The Crystalians. This boss encounter is against a pair of Crystalian opponents. One wields a spear, while the other wields a staff. Both are protected by a thick, crystal shield, significantly reducing the damage they take from your attacks. These shields will eventually break after each Crystalian's HP reaches a certain percentage. Cracks will be visible in their shields, signifying that you can now deal full damage to them. It is highly recommended that you use a tanky summon such as the Kaiden Sellsword Ashes to distract one of the Crystalians as you focus on the other. See the Crystalians page for further details on the fight.

Defeating this pair of bosses yields the Crystal Release Sorcery spell. Continue on to the door behind the bosses to reach an elevator that will take you to a tower within the academy. Climb the tower to find a chest containing the Terra Magica spell.