Castle Sol is a Location in Elden Ring. The Castle Sol is found in Mountaintops of the Giants in the northeast. Players can reach this location by crossing the northern bridge from Stargazer's Ruins or from the Minor Erdtree (Mountaintops East). 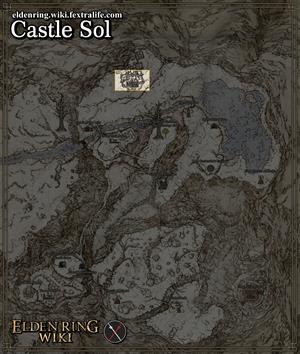 All NPCs and Merchants in Castle Sol

From the main entrance, you can find a Lion Guardian elite roaming the main courtyard. You can attempt to defeat it to permanently get rid of it (Lion Guardians do not respawn) or sneak by while its back is turned. If fighting it, be careful as its wounded friend is resting in a corner just to the right inside the gate and may aggro. Make your way through the wooden barricades in the northwest and follow the path along the walls. Look for a room with several Slugs in it. Get rid of the slugs and then pick up the Nascent Butterfly on the corpse by the ladder. Ascend the ladder and look towards the eastern edge of the roof for a corpse with 5x Fan Daggers. Carefully traverse the top of the castle walls in the southwest and pick up the Golden Rune (10) on the corpse in the corner. There are Castle Guards on the walls as well as on the roofs of the buildings across from the walls that will fire explosive projectiles at you. You can try to pick them off with ranged weapons or magic if you have spells with good range. Be especially aware of the ballista operator further down the walls. It can one-shot players even at high levels. Dash towards and behind him and take him out quickly as there is another ballista operator atop the central building of the courtyard. Get up to this building by using the walkways, take out the ballista and then check the corpse in the back for a Smithing Stone (6). Drop down the ladder here to get inside the building and pick up the Sorcerer Painting sitting inside. Unlock the door and then teleport back to the main entrance.

Back at the entrance, enter the courtyard and sneak towards the grave stones in the south for another Golden Rune (10), but beware of the sleeping Lion Guardian. Now make your way to the wooden walkway directly east of the main gate and check under it for a Smithing Stone (5). Head up the walkway and check the left side for a corpse hanging over the edge. You can loot a Freezing Grease off of it. Back in the center path, check the corpse on the right for 3x Thawfrost Boluses. Continue along to the building in the north which connects to a walkway in the east. Beware the spectral melee Castle Guards here that teleport in and out of range, as well as the guard with a crossbow in the distance. Head up the wooden stairs on the left and defeat the guards that teleport in here. Check the corner for a corpse with another Golden Rune (10). From here, head on south to reach the Church of the Eclipse, an important landmark with a Site of Grace inside. On the way, you can kill the crossbow guard and loot the corpse hanging on the low wall for another Thawfrost Boluses. Activate the Site of Grace and then head back outside and look to the east for a ladder leading to the middle level of the eastern castle section. Head south from here and pick up the Smithing Stone [5], then go north to pick up a Golden Rune (9) off of the corpse on the right. Head west across the wooden platform from here to fight a knight and two wolves, after that head north onto the outlook to find a corpse holding a Stonesword Key.

Back inside the church, check the altar for an Eclipse Shotel curved sword. Head out of the church using the eastern exit and check behind the church for a ladder leading up to the outer walls. Beware the crossbowman in the distance and the guard atop the ladder. Follow the walls towards the south and when you see a short set of steps to the right, you can jump to the building with an opening on the roof. This leads into a room full of Rats where you can pick up 3x Smithing Stone (7) from the corpse in the corner. Exit the room and turn the corner on the right to find a corpse with a Rune Arc by the campfire. Teleport back to the Church and head up the ladder once more. This time, follow the walls to the southern side where you will find a ladder leading to a lower section of the wall. There is a Spectral Banished Knight here equipped with dual swords. He is very aggressive and will often teleport behind you. Your objective here is the corpse hanging off a wooden ledge in front of him. You can loot the Cerulean Amber Medallion +1 from the corpse. You can try to beeline for the corpse, ignoring the knight and then heading back up the ladder and rushing back to the church but be careful as he can chase you for quite a while.

Back at the Church, take the eastern exit once more and continue to the building ahead. Head up the stairs, or use target lock on the bottom floor to find and kill three Albinaurics who are hiding in the shadows. Be careful of charging in as there are two hanging screamers who will alert the albinaurics on the bottom floor and spawn two Spectral Castle Guards with greataxes. Target them down from range before they notice you and the axe guards will not spawn. Check the corpse by the edge for a Smithing Stone (6). Continue along with another set of stairs and exit the building to arrive at the upper level of the castle's eastern section. The boss door can be found here but before entering, ride the lift down to activate a shortcut, head to the corpse in front of you to loot a Furlcalling Finger Remedy, then head back up the lift to the golden mist door.

Commander Niall is a tall and built knight with a peg leg, clad in heavy armor, wielding a halberd that doubles as a battle standard. He is accompanied by two Spectral Banished Knights, one equipped with dual swords and the other equipped with a sword and shield. Success in this battle hinges on your ability to manage the two very dangerous knights. Niall himself doesn't get too dangerous until the knights are defeated. He will lumber around the arena, making no real effort to close the distance, so focus on the knights at the beginning. Of the two, the dual sword knight is the most aggressive and dangerous. It is highly recommended that you summon a tanky spirit to more easily manage both knights at once. They are also susceptible to Magic Damage so Sorcery mains should have a slight advantage damage-wise.

Once the knights are killed, Niall begins actively pursuing you and using his more dangerous moves. Niall commands the powers of Ice via a whirlwind he summons around him, as well as Lightning via infusions on his artificial leg. Niall's most dangerous moves always involve him summoning whirlwinds of frost around him. He can then follow up with a stomp of his peg leg, infusing it with lightning, and then leaping towards you to perform a powerful leg smash that creates a lightning shockwave on impact. He can also follow up with two versions of a dash attack. The first is a single whirl of his halberd followed by a quick dash into an uppercut with his halberd. The second version sees Niall charging up for a few seconds as he sucks in frosty winds towards him, he then whirls his halberd several times, creating an expanding whirlwind of frost. Finally, he dashes to the side and then runs toward you, culminating in an uppercut with his halberd. This move tires Niall out and he will be kneeling and vulnerable for several seconds. This is the biggest damage window throughout his fight so be sure to dodge the uppercut and get as many hits in as possible as he recovers.

Defeating Niall awards 90,000 Runes and the Veteran's Prosthesis fist weapon. You can also now access the Site of Grace in his arena and proceed to the northeast tower where you can find the Haligtree Secret Medallion (Left), one of two halves of an artifact required to operate the Grand Lift of Rold.

There is a Somber Smithing Stone (8) located on the side of the Church of the Eclipse. To pick it up, walk to the back of the Church by the ladder 2 Guards with crossbows. You will have to platform onto the broken wall and hug the wall of the church to reach it. Killing the crossbowmen makes this easier to do.

There is also a Somber Smithing Stone (8) located on a cliff directly SE of the entrance bonfire, outside the castle. To get to it, circle clockwise around the entire castle until you arrive at the corpse sitting on the edge of the cliff.