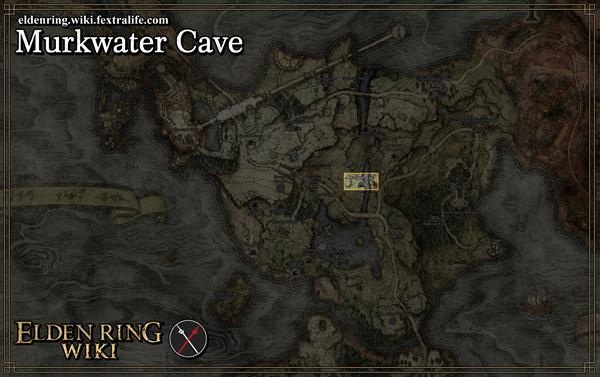 All NPCs and Merchants in Murkwater Cave

It is recommended to use a Torch to be able to see. Keep moving, until you reach the first room, in which you will find two people. One is running around, while the second one is sitting on the other corner of the room. There are two traps near the entrance of the room and a third one in its centre : walking through them will ring the alarm and more enemies will come. Deal with the two enemies.

Two more enemies will come from the corridor as soon as you approach it, be ready to dodge. There are three more enemies sitting in the next room. If you are playing a caster, opening with Glintstone Arc is a good idea to strike first and deal massive damage to all. You will find some Cave Moss in the room. Open the chest too loot x5 Mushroom.

Return to the first room and head the other way to find a fog gate Boss room. Traverse it once ready. As you enter, you will notice that there is no boss. Head to the chest and open it. You will hear a voice, unhappy by your actions and demanding revenge. Patches, a veteran FromSoftware character, makes his grandiose entrance. He will then first initiate a boss fight with you. You will eventually be prompted to forgive him during combat.

Once his health reaches about, he will surrender.  The sequence won't stop until you cease attacking him. At this point he will be cowering behind his shield and cease his attacks. Do not kill him, and wait for the 'Enemy Felled' notice. You will still receive Golden Rune (1) and the Grovel for Mercy Gesture. Forgive him to return to him here and interact with him again as a merchant. He may be found at another location and his new coordinates are found here: Elden Ring Map

Loot the chest in the room if you haven't already- to obtain Cloth Garb and Cloth Trousers. Opening the other chest in the room will have you ensnared in a transporter trap that sends you to Mistwood surrounded by Lesser Runebears, near Nomadic Warrior's Cookbook[4]. Map Link.

Come back to engage in combat again and during the fight he may drop another Gesture, Extreme Repentance. If you choose to kill him off and he will drop: