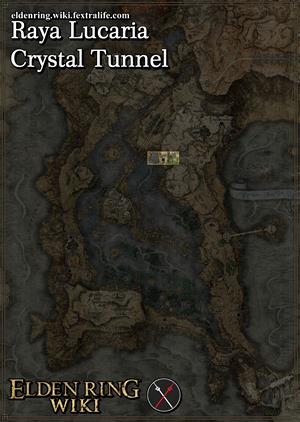 All NPCs and Merchants in Raya Lucaria Crystal Tunnel

Two things to note right off the bat:
1) I explored the first floor of this place when I first found it so I might be missing a few items. I'll make a note when I'm missing an item.
2) This area took me about an hour to get through because I wasn't using a magic imbued weapon. I highly recommend using one. Throughout most of this mine the only enemies attacking you are the Digger guards watching over the Diggers and the Marionette soldiers. The Diggers will not attack unless either you hit them or steal the material they are mining.

With that out of the way let's begin. When first entering the mine you'll find an elevator. Going down it will put you in front of the Site of Grace for this area. On the way down the elevator you might notice two doorways on the left side of the wall. If you want to reach these, go back up the elevator and destroy the boxes on the left right before you get on the elevator then jump down. Be careful because if you fall you will die. In the first doorway you will find x1 Cracked Crystal. Following the ledge left drop down and enter the next doorway. You'll get 3 Cracked Crystals. Continue following the ledges down. There are lamps to guide you. At the bottom of the elevator, before you head through the doorway, look behind you and grab the x2 Cracked Crystal that are in the corners.

Heading through the tunnel in front of the elevator will lead you to a fork in the path. Going right will bring you to a chest guarded by two Diggers. One of which will patrol the area. Inside the chest you'll find Somber Smithing Stone (2) 1x, and a Somber Smithing Stone (3) behind the raised icon. You can grab 4 Cracked Crystals from this room. Going to the left will lead you to an open area with one Digger on the left and three on the right. One of the Diggers on the right is patrolling the area while the other two are mining. You'll notice a support beam in the area. If you cross it you can jump on the wooden ledges that are jutting out. Near the top grab the Smithing Stone [3]. At the top you'll find a corpse with one Somber Smithing Stone [3]. This room holds six Cracked Crystals.

In the next room, looking to the right you'll notice another Digger sitting down. Down the first set of stairs are two more Diggers who are also sitting down. They will attack you when you near them, just like the previous one who was sitting. After killing them look to your right. You should see a Digger and a path that leads to a small room. Be careful when attacking the Digger outside of it because one from beneath the stairs will attack you. The small room holds 2 Smithing Stone [3]. One on a wall to the left and one on a corpse to the right. Going behind the stairs you'll find a corpse with 1 Golden Rune [3]. This room contains a total of sixteen Cracked Crystals and a further Smithing Stone [3]. Exiting this room leads you to an elevator with more ledges. Just like last time, stick to the left. You'll find a tunnel that leads to a ledge with  Somber Smithing Stone [2] and x2 Cracked Crystal. Either return to the elevator shaft or carefully drop below to access a corpse with a Somber Smithing Stone (3).

Go through the doorway that has a tunnel in view. The first level has no enemies on it. Go down the first set of stairs and kill the Digger. After you killed him look to the left. You should see three Diggers in a circle and two Crystal Sorcerers. Take out the sorcerers first. They have more health than the Diggers and the Diggers here won't attack you unless you attack them first. After dealing with the sorcerers, kill the three Diggers in a circle and collect the three Smithing Stone [3] and the Somber Smithing Stone [1]. There are two more Diggers in this area. After killing them all (if you want to) you can collect the eight Cracked Crystals, the Smithing Stone [2], and the Smithing Stone [3]. The last two smithing stones can be found in the collapsed tunnel in the back of the room. On your way out (looking left from the second platform leading down) there is a tunnel leading to a room with a corpse holding the spell.

The tunnel in front of the stairs leads you to an elevator. To the left of it, after you break the items there, jumping down will lead you to a small tunnel with a Somber Smithing Stone [3]. Once at the bottom of the elevator you'll sell the golden boss fog, but pick up the Somber Smithing Stone [1] to your left first. If you want to go back to the Site of Grace to rest and take the elevators you found along the way down.

This boss is the Crystalian. It's moves are easy to predict and you can summon spirits to help you. You won't be doing much damage in the beginning until their armor breaks at half health.  Strike weapons like maces and clubs will do a lot more damage in that first phase.  After their armor breaks at half health all weapons will do full damage again. Getting hit with one of her throwing blades seemed to cause one resembling it to show around my wrist allowing me to do full damage.