Tower of Return is a Location in Elden Ring. The Tower of Return is found at the Weeping Peninsula, at the southern tip of the western landmass. This location is easily accessible on foot or horseback as it is out in the open field. This tower contains a Teleporter Chest that transports players to Leyndell, Royal Capital (or the endgame area) upon opening. 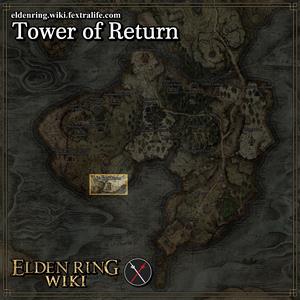 All NPCs and Merchants in Tower of Return

All Items in Elden Ring's Tower of Return

On the way to the tower itself, beware the numerous Godrick Foot Soldiers in the nearby fields. There is a group of 3 surrounding the nearby effigies and one sitting atop the tower, operating a ballista. A Great Dragonfly Head can be found on the ground by one of the effigies. There is also a mounted Godrick Knight patrolling near the tower (which can be farmed for its armor set), accompanied by two Wandering Nobles and three more Godrick Foot Soldiers at the foot of the tower. Engage these enemies one by one or in small groups as they can quickly overwhelm you despite their relative weakness.

There is little to do at the Tower of Return itself. The chest at the top is a Teleporter Chest that transports the player to the Divine Bridge Site of Grace when opened. The only way forward leads to a platform with a Golem resting in the area, a chest containing a Blessed Dew Talisman on the right, and an inactive Waygate on the left that would lead to the Isolated Divine Tower much later in the game. This Golem may be a difficult fight if the player is sent there early in the game; to leave, rest at the Site of Grace and fast-travel should be enabled to get you out of this area.