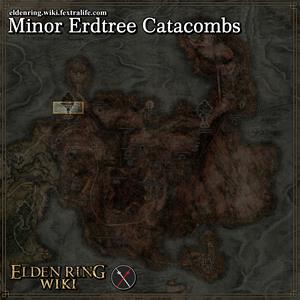 All NPCs and Merchants in Minor Erdtree Catacombs

Imps make these catacombs their home, with many of them perched on the walls and the ceilings, awaiting passersby. Bring ranged attacks and spells or craft throwable Consumables to knock them off their perches and prevent unwanted surprises Press the target lock key frequently to easily find these mischievous creatures.

From the site of grace, head down the first corridor ahead and hit the Imp on the ceiling from afar. There is a lift leading down around the corner. From the lift, head down the western corridor and defeat the Imp in the corner. The room around the corner has a couple more Imps inside. There is a Grave Violet just before you enter the room and a Grave Glovewort (3) at the back of the room before the next room. In the next room, there is an imp hiding in the right side and one more clinging to the ceiling. After defeating them, pull the lever by the statue and then head back to the lift.

This time, head towards the east corridor and collect the Grave Glovewort (4) on the way. In the next room, hit one of the Imps in the upper level from the corridor and three Skeletal Slimes will drop in from the ceiling. There are several more slimes in the room behind the pillars and a couple more Imps in the upper level. Beware of the floor here which is oozing with water that inflicts rot. There is a Grave Glovewort (3) to the right by the entrance and an Aeonian Butterfly on the corpse in the center. There is another Grave Violet and a Grave Glovewort (5) in the back half of the room.

Head back to the lift once more and step on the switch then get off before it rises. The rest of the dungeon is found in a passageway underneath the lift. Drop down below and take out the Imp patrolling the area. The next room is filled with the same scarlet rot fluid and several slimes will drop down from the ceiling as you approach. You can take them out or just sprint past them. There is a narrow passage to the north with a set of stairs leading to a room with a bunch of crabs. Take them out and pick up the Grave Glovewort (4) and Golden Rune (4) by the wall at the end. On the east side of this room is a ladder leading up to a long hallway. At the top of the ladder there will be an Imp around the corner to your left, and an Imp ahead of you. Take the Imps out and pick up the Grave Glovewort (3) on the way. There is another Imp on the ceiling halfway through the hallway and one more in the room at the very end. Pick up the Imp Head (Wolf) helm from the corpse bent over the sarcophagus and then turn right toward another room. This is the upper level of the first room with the scarlet rot fluid. Take the Imps out on the balcony if you haven't done so earlier. Check the corpse ahead for 2x Sacramental Buds and head to the left for another Grave Glovewort (5).

From here, you can head back to the second scarlet rot fluid-drenched room and continue to the western corridor and turn left to find the dungeon's boss door.

This boss fight is a Duo battle against two Erdtree Burial Watchdogs. One has a Sword, similar to the one encountered in Stormfoot Catacombs while the other has a Watchdog's Staff. It is recommended you focus on the Staff one as it uses ranged magical projectiles. Consider using a Spirit summon to distract one Watchdog while you focus on the other, or Crystal Darts to make them fight each other. Aside from that, the strategies are largely the same as previous encounters. Always be on the move. If you are running, their aerial slam attacks should not hit you. Weave in 1 or 2 attacks max between slams and other weapon attacks. Watch out for when a Watchdog stands on its hind legs. It will slowly walk towards you and slam its weapon down very quickly. Be ready to dodge sideways.

Note that phantoms in your world can pull the lever in this dungeon. If they do, the host will not be able to interact with it. Resetting your game seems to fix this.