Frenzied Flame Village is typically accessed from the north of the eastern landmass, riding south from the Grand Lift of Dectus.  [Elden Ring Map here]

Alternatively, smart use of the jagged rocks north of the Minor Erdtree (Liurnia Northeast) while riding and jumping on Torrent will allow players to reach the Frenzied Flame Village and Frenzy-Flaming Tower without having to go around through the northern section of the landmass. 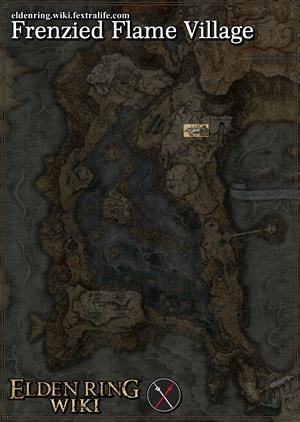 All NPCs and Merchants in Frenzied Flame Village

Directly to the north of the Village is a crumbling tower with six Frenzied Villagers at the top.  Every few seconds, a ball of fire appears above them and begins to inflict Madness on you if there is nothing solid blocking your line of sight to it.  Killing the villagers at the top of the tower will stop this flame from appearing.  In order to reach the top of the tower, you can either make your way to the base of the tower and climb the ladders to the top floor, or ride the wind gust that is on a lower cliff directly to the north of the tower.  The path leading to this wind is west of the tower, tucked between two small cliffs.  Note that Madness will continue to be applied to you while you are on top of the tower as long as any of the villagers are still alive.  This can be avoided by taking cover one floor down from the top floor, then climbing the ladder as the flame begins to fade.

Nearby, players can obtain an incantation Dropped by a Teardrop Scarab. Elden Ring Interactive Map Link]

It is possible that Vyke will not invade the player. Currently (March 16, 2022), and the cause is unknown. It is possible that a certain "trigger" is preventing Vyke from invading. This could be killing a certain boss, clearing a certain dungeon, advancing another NPC’s questline beyond a specific point, or having a specific item in the inventory. There have been numerous reports in comments and other forums about what this possible "trigger" is, but they have all been contradicted by other users.

Approaching from the Northern entrance, you'll find a Note: The Lord of the Frenzied Flame around the corner from the crumbling wall. Moving clockwise along the wall, there is a Frenzied's Cookbook (1). On the porch of the house adjacent to the three armor-clad, frenzied soldiers is Shabriri's Woe. Atop the wall at the south is a Stonesword Key.