If you're following the normal progression, this will be the last Catacomb that you encounter in the game.

Find the Catacombs by following the road north and then going east and exploring the cliffs in Consecrated Snowfield. [Elden Ring Map here] 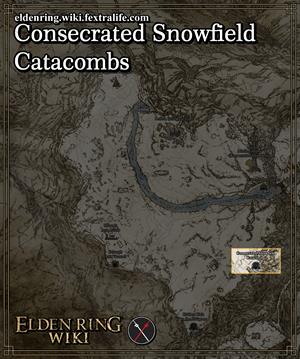 All NPCs and Merchants in Consecrated Snowfield Catacombs

Note: The Consecrated Snowfield Catacombs are swarmed with Imps and patrolled by Lesser Cleanrot Knights ready to stop enemies from venturing within their halls. Beware of the Erdtree Burial Watchdogs ready and watching for trespassers to jump on. Players should also walk carefully when moving up stairways so as not to stumble into a face full of icy breath being shot down the corridors by the frost traps. To access the boss room of this area you must hit the lever found far inside the catacombs. Gain access to the second floor near the tall frost trap and hit it so it goes down, then get on top and hit it again to rise up to the third floor and activate the lever.

Heading up the stairs from the Site of Grace the first room is more stairs, with a 90 degree right  turn and a large pit on the side, players will die if they fall into the pit. 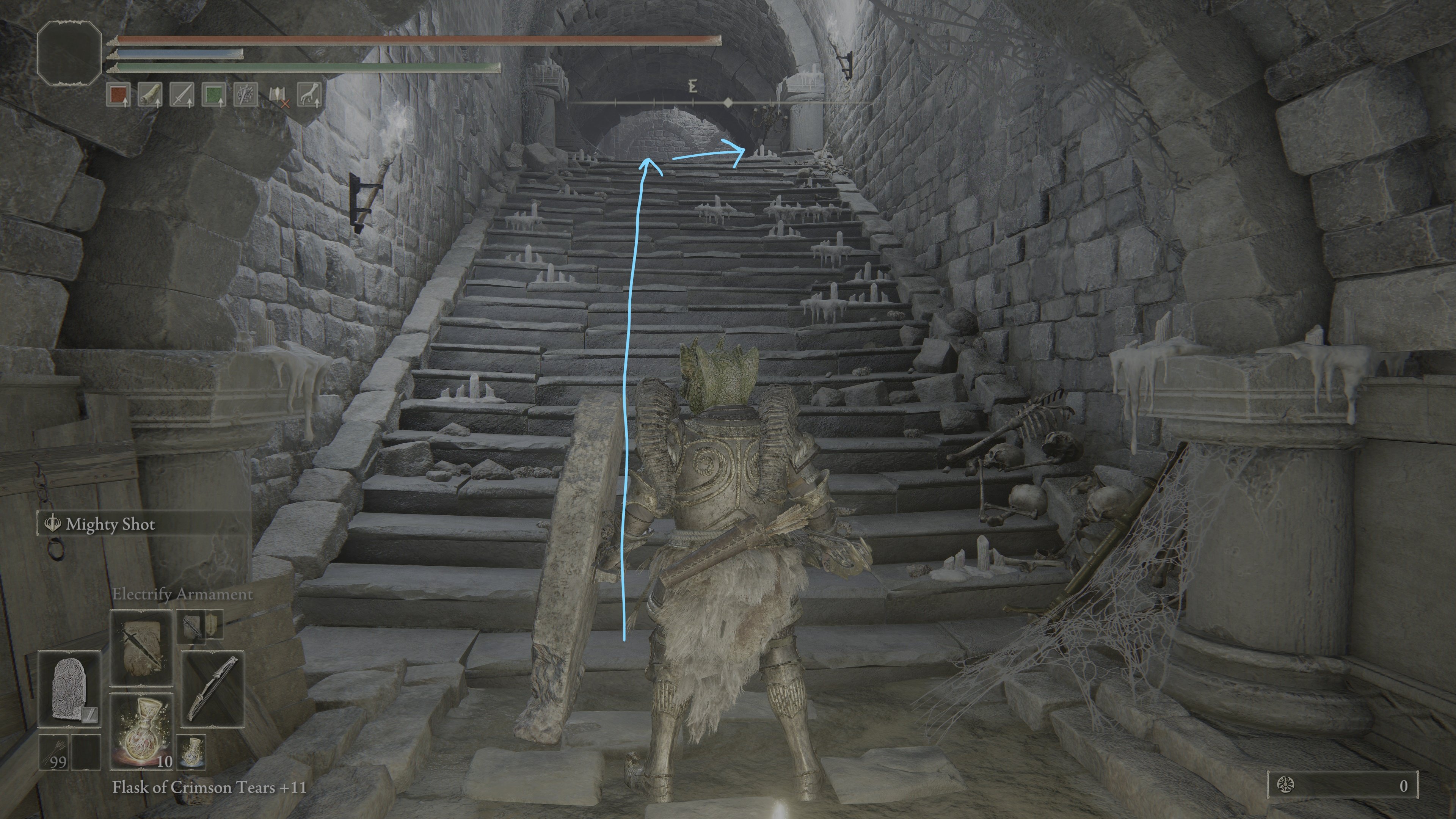 There is 1 imp at the turn of the stairs that can be a surprise, make sure not to fall off during this fight. 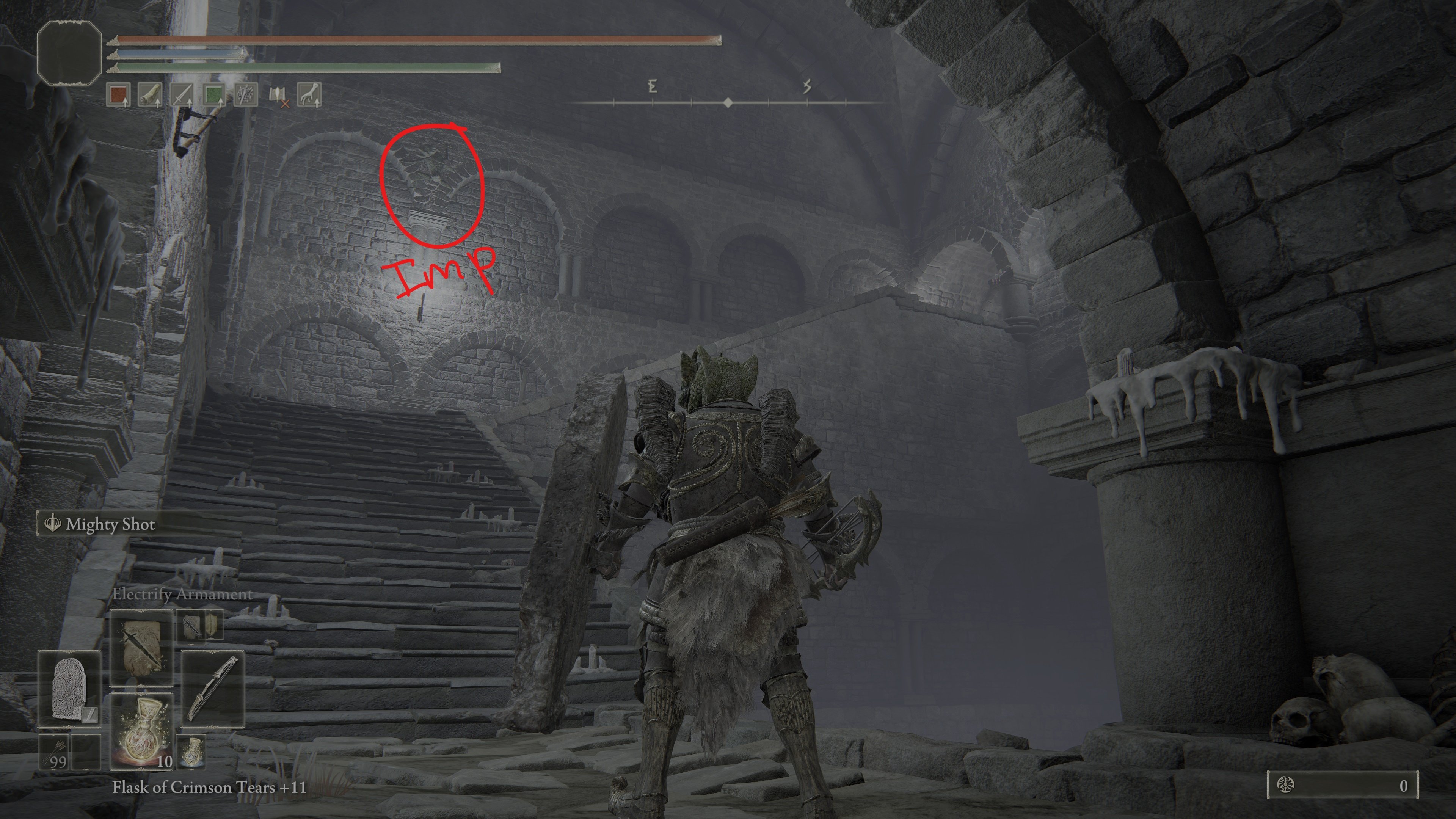 The corridor at the top of the stairs has a frost trap at the end of it breathing icy-breath that will do damage and apply Frostbite if it connects. 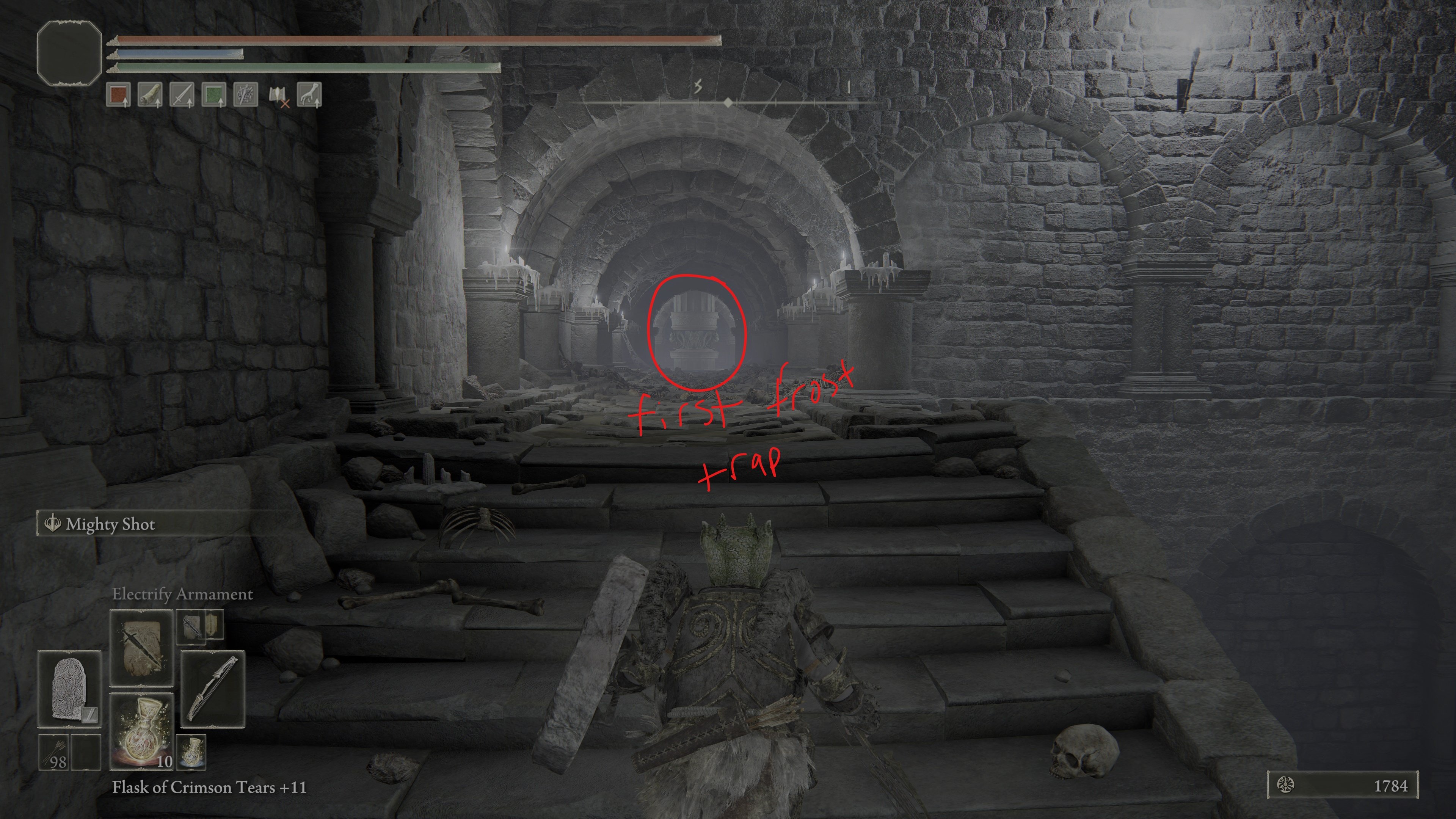 Time your step and move between the safe pockets on the sides of the corridor. Once at the frost trap hit it once to have it lower into the ground and stop firing the breath. On the way down the corridor there is one safe pocket on the right side and then another one further on to the left side.

As you hop into the left "pocket", you'll find imp waiting to jump and attack the player, get behind the imp to stay away from the icy breath while fighting. Going down this path will lead to the locked boss doors of the catacombs and further into the catacombs, but we have to first unlock the boss door. 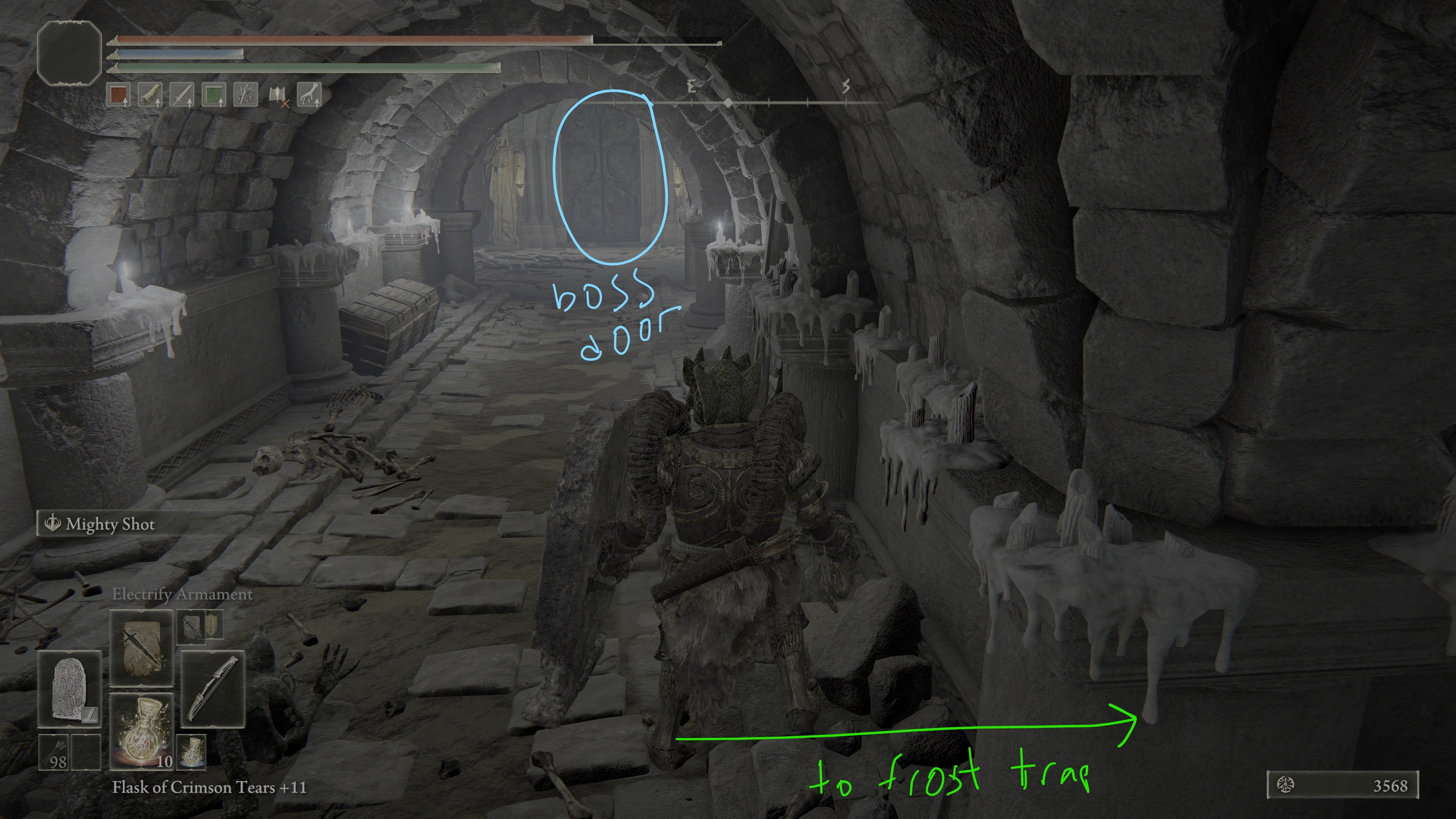 The room with this first frost trap is a dead end room, jump onto the frost trap to be raised up to the ledge above where an imp is waiting to attack. A corpse sat in front of the tomb at the top holds a Rejuvenating Boluses. 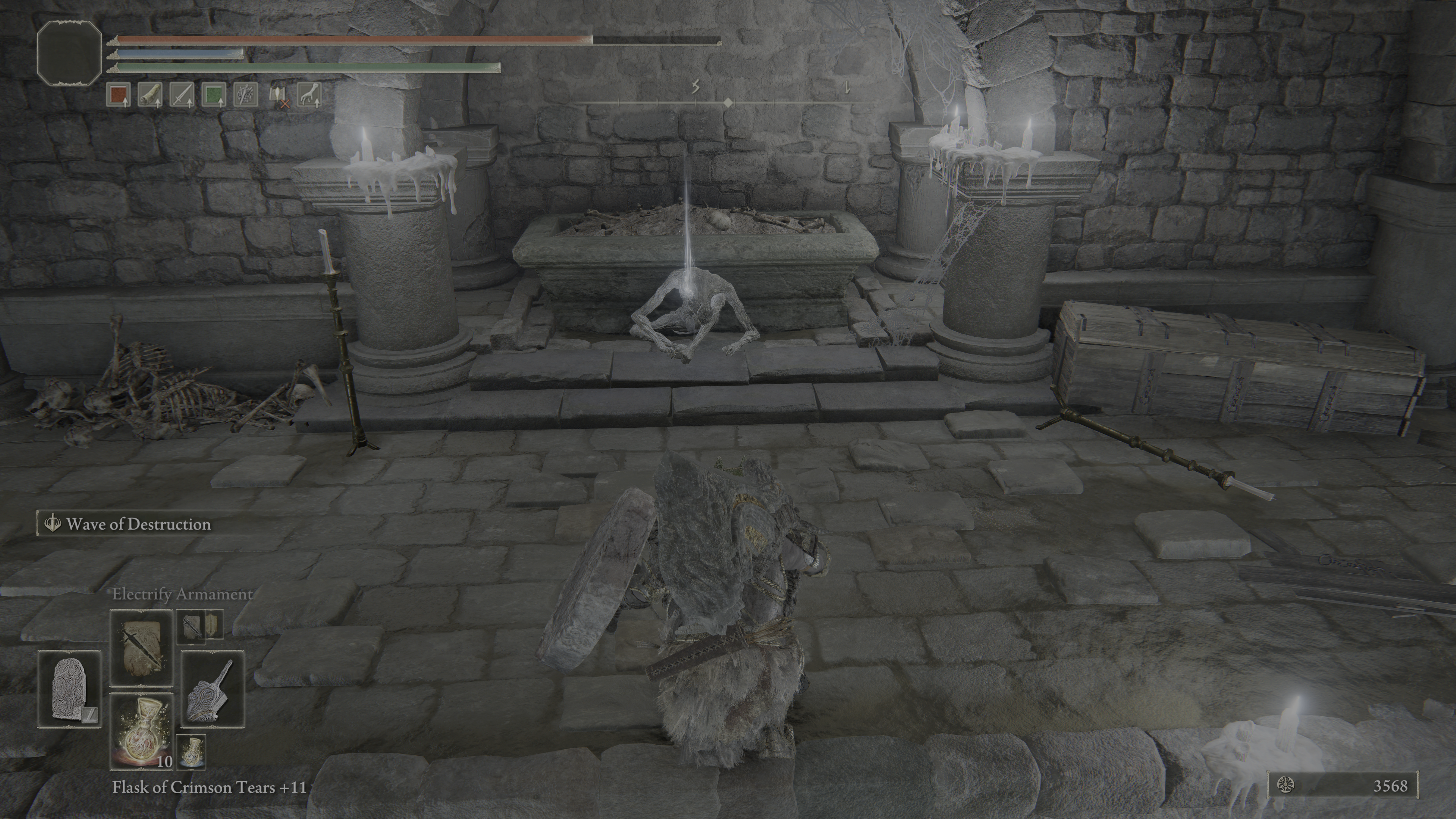 Having retrieved the only "loot" form this room, head back out, and proceed back to where the locked boss doors were. When you get to where the boss doors are, turn right, but walk carefully when going up the next set of stairs as there will be another frost trap breathing down the doorway at the top. 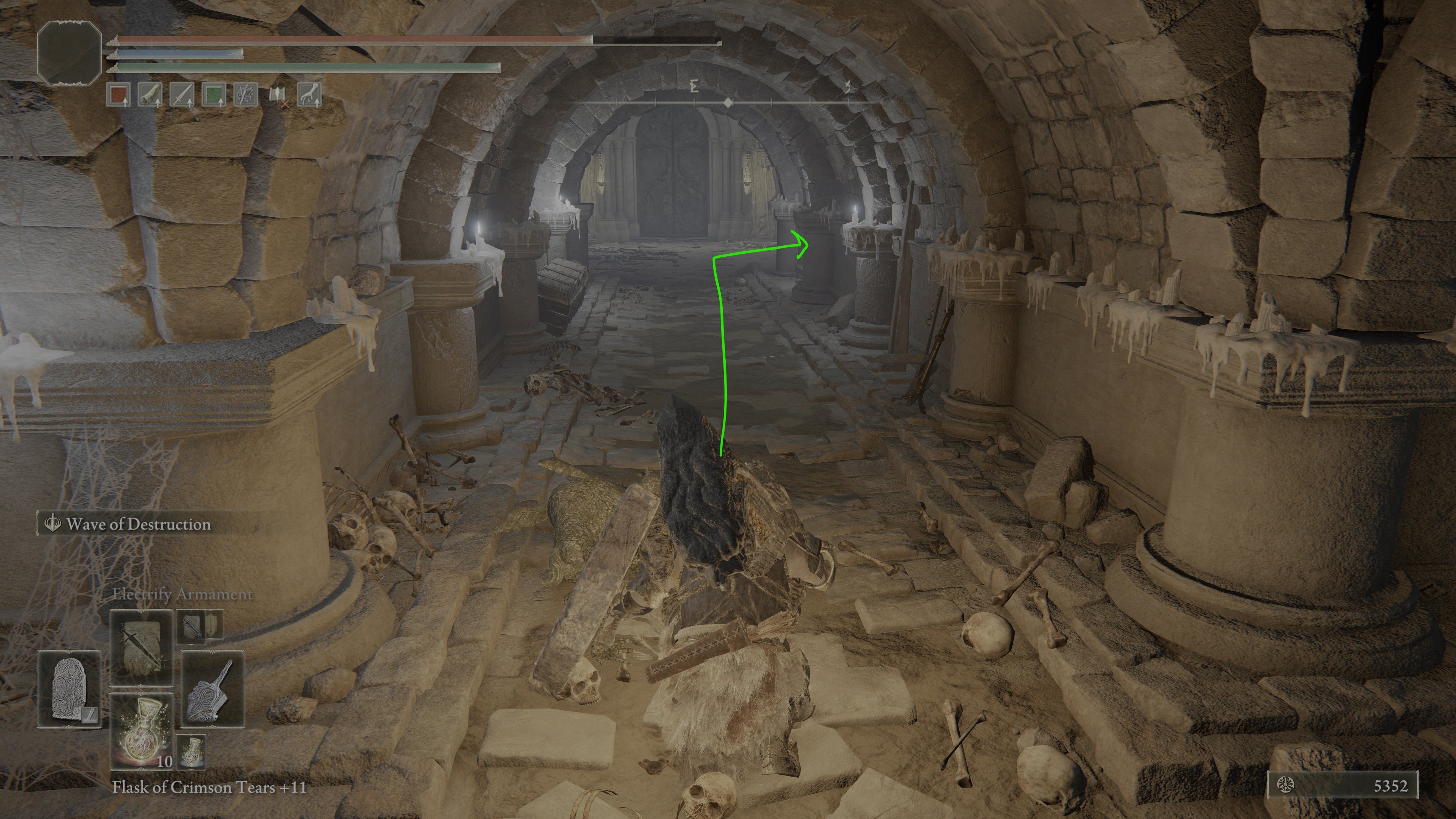 This room is a large hall with a tall ceiling and a tall frost trap.  There are 3 floors that can be seen in this room with the lever for the locked door found on the third floor. On the right close to the entrance is an imp, as well as an Erdtree Burial Watchdog with a staff on the 2nd floor that will jump down to attack you. There is also an Imp on the left side of the second floor. It's recommended to lure him out if you have a ranged attack, so that he won't be able to ambush you when you get to the second floor. 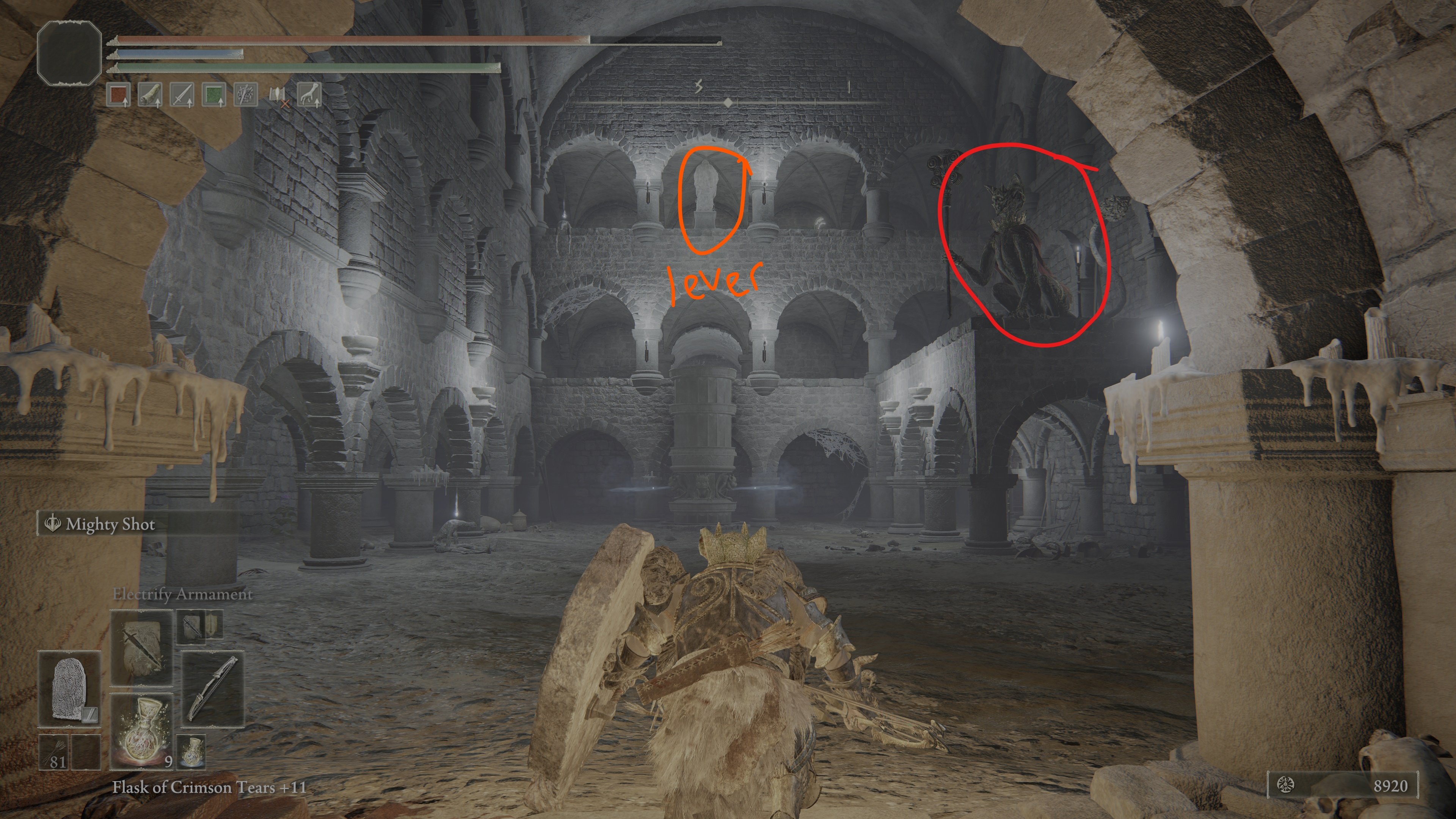 A body with 4 Root Resin can also be found in this room.

Hitting the frost trap will lower it but instead of turning off the breath, the now lowered statue will breathe the icy breath in the other directions, down the tunnels leading out of the room. The icy breathe can be used to help deal with the Watchdogs as you can make them follow you into the tunnels then use a ranged attack to lower the frost trap, round the corner to have the watchdog stop chasing and keep taking damage from the frost trap.

The passageway on the right leads to a larger room with stairs. This room has 2 imps in it, one found close on the right of the entrance and one up the stairs. 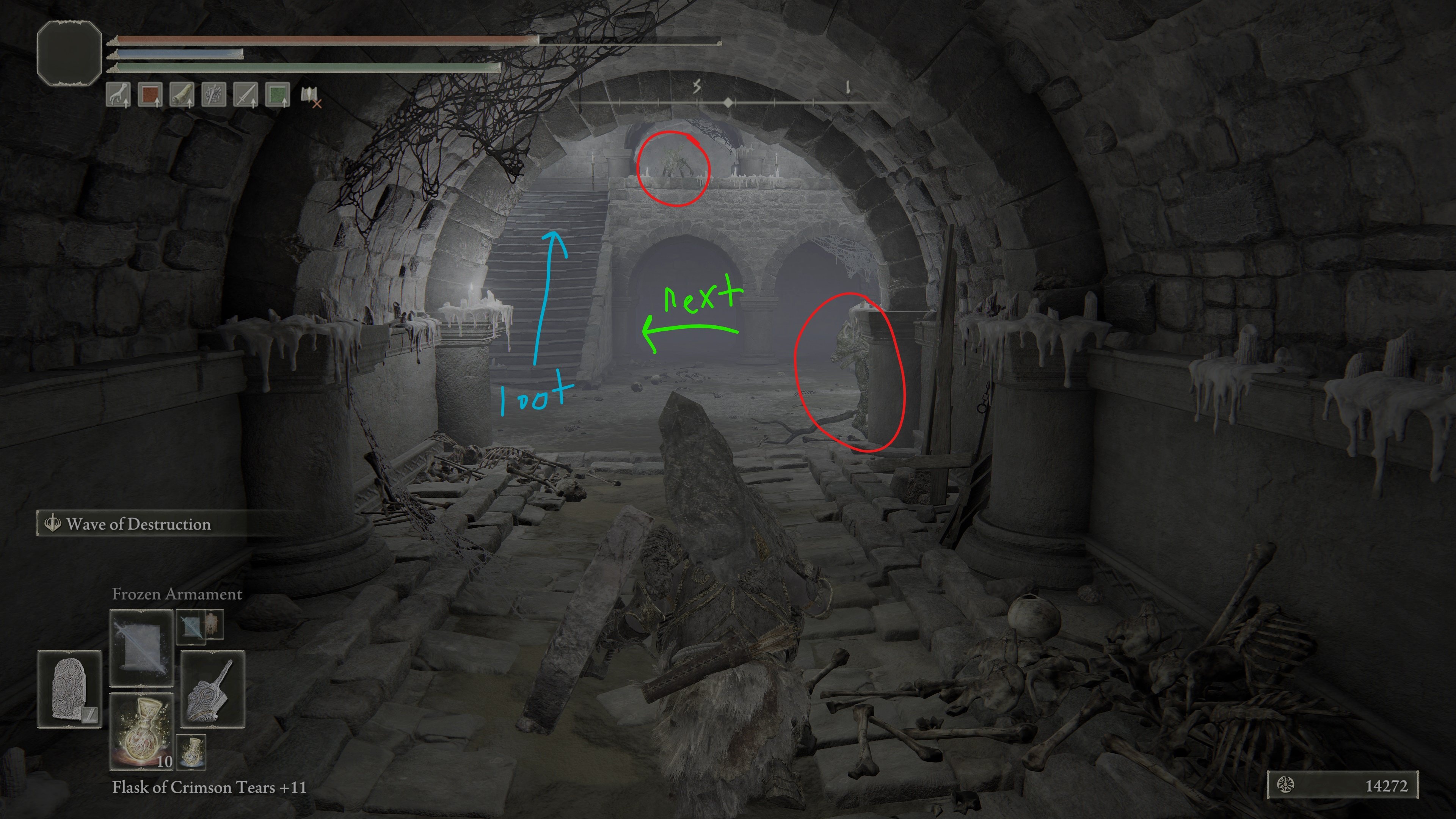 Going up the stairs will bring you to a dead end room with an Erdtree Burial Watchdog with a sword sitting over a body that has the  Imp Head (Elder) as well as a Grave Glovewort (9), a Grave Violet, and Human Bone Shard.

Instead of going up the stairs, there is a pathway under the stairs leading to the next room of the catacombs. A Lesser Cleanrot Knight is found inside, patrolling the room, as well as a Grave Glovewort (8). (The good news is that the understair corridor is too narrow for the Erdtree Burial Watchdog to follow you through, so you can avoid fighting it.) 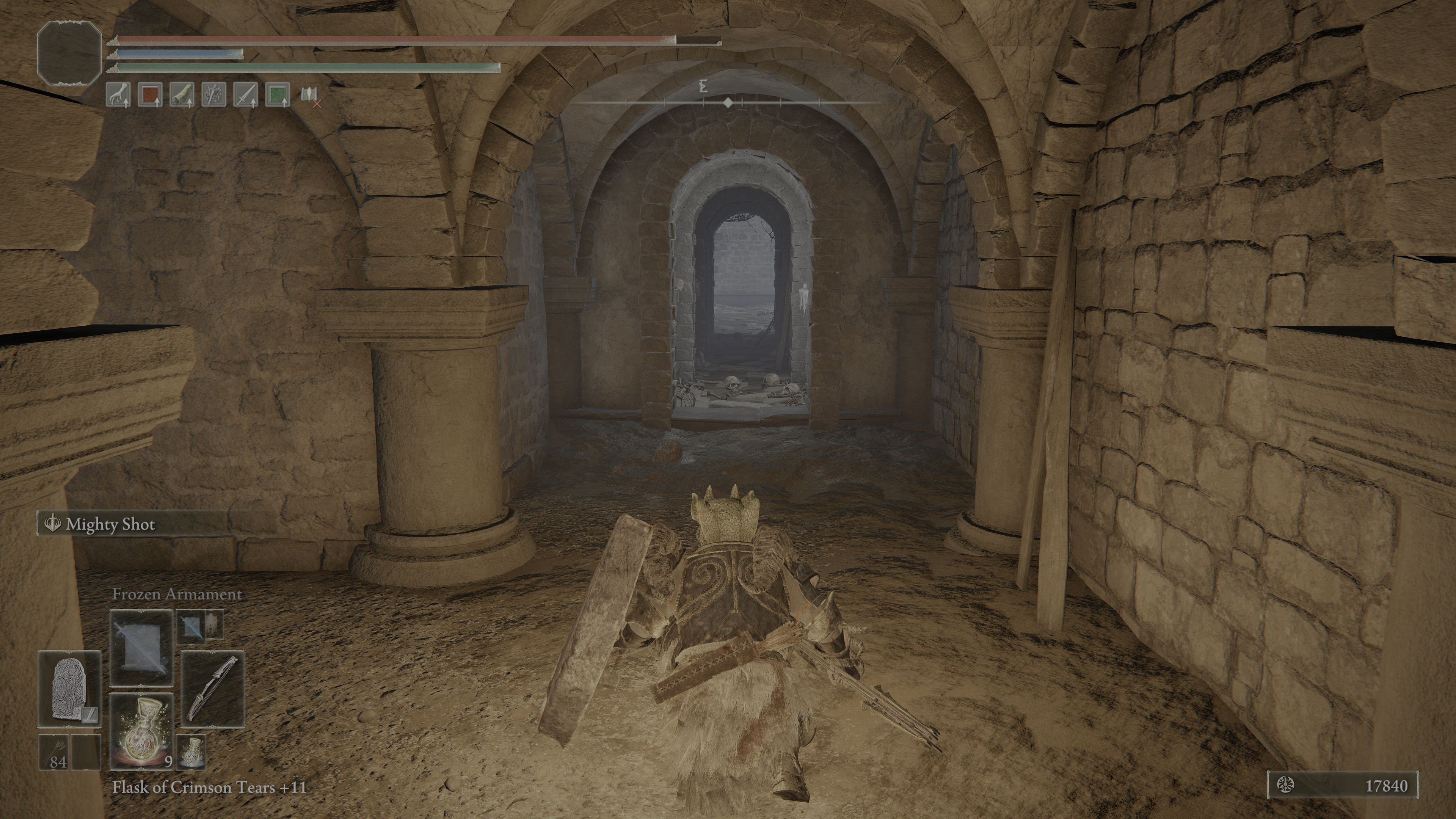 As you enter the room, on the left there'll be a set of stairs, walk up them, but carefully; if the tall frost trap is raised up it will wait for the player to peek out before spraying the ice breath, at the top of the stairs is an imp that is waiting to attack unless you lured him out earlier. These stairs lead to the second floor in the large hall (that you saw the Erdtree Burial Watchdog standing on earlier), and on the left side is a Grave Glovewort (9) as well as a room with 2 Lesser Cleanrot Knights within and the Ghost Glovewort (9). 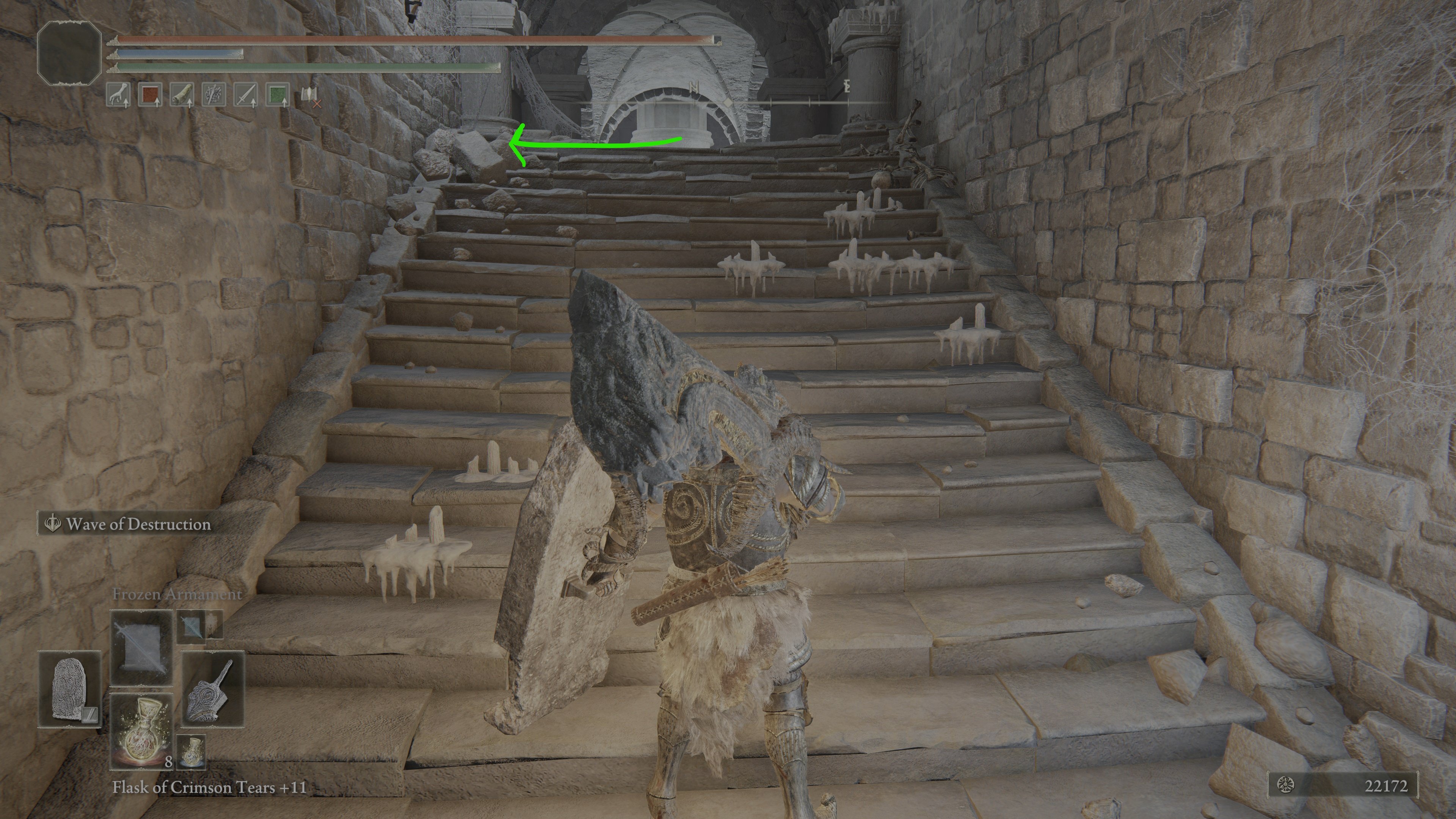 With the second floor done, we're ready to go up to the 3rd floor and finally open the boss lever.

Hit the frost trap to lower it if it isn't already lowered then, exit the room with the 2 Lesser Cleanrot Knights, and safely jump on top of the frost trap, then hit it to raise it up to the third floor of the room to find the lever. 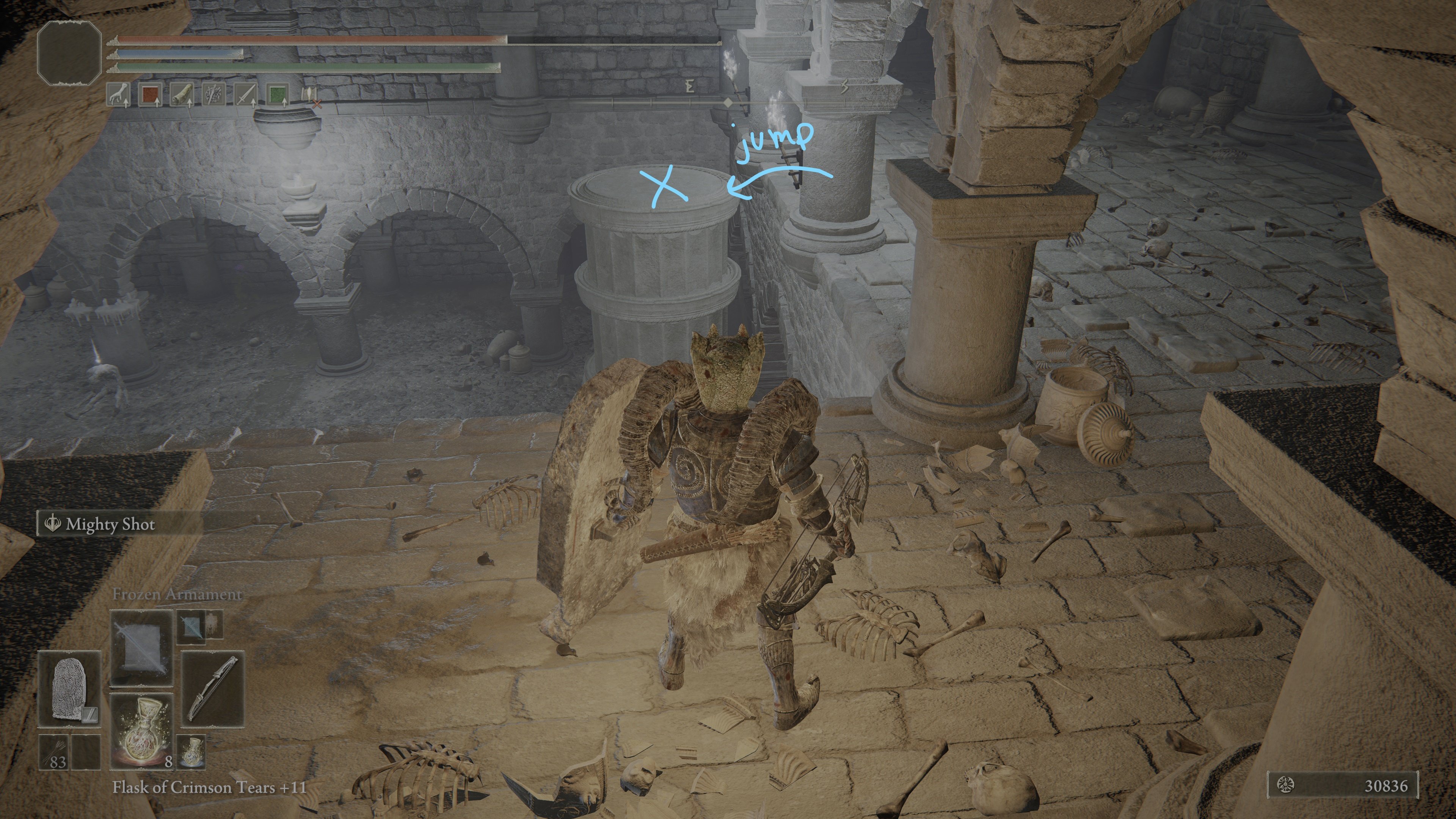 A Grave Glovewort (9) and a Golden Rune (12) can be found here on this third floor on either side of the lever. 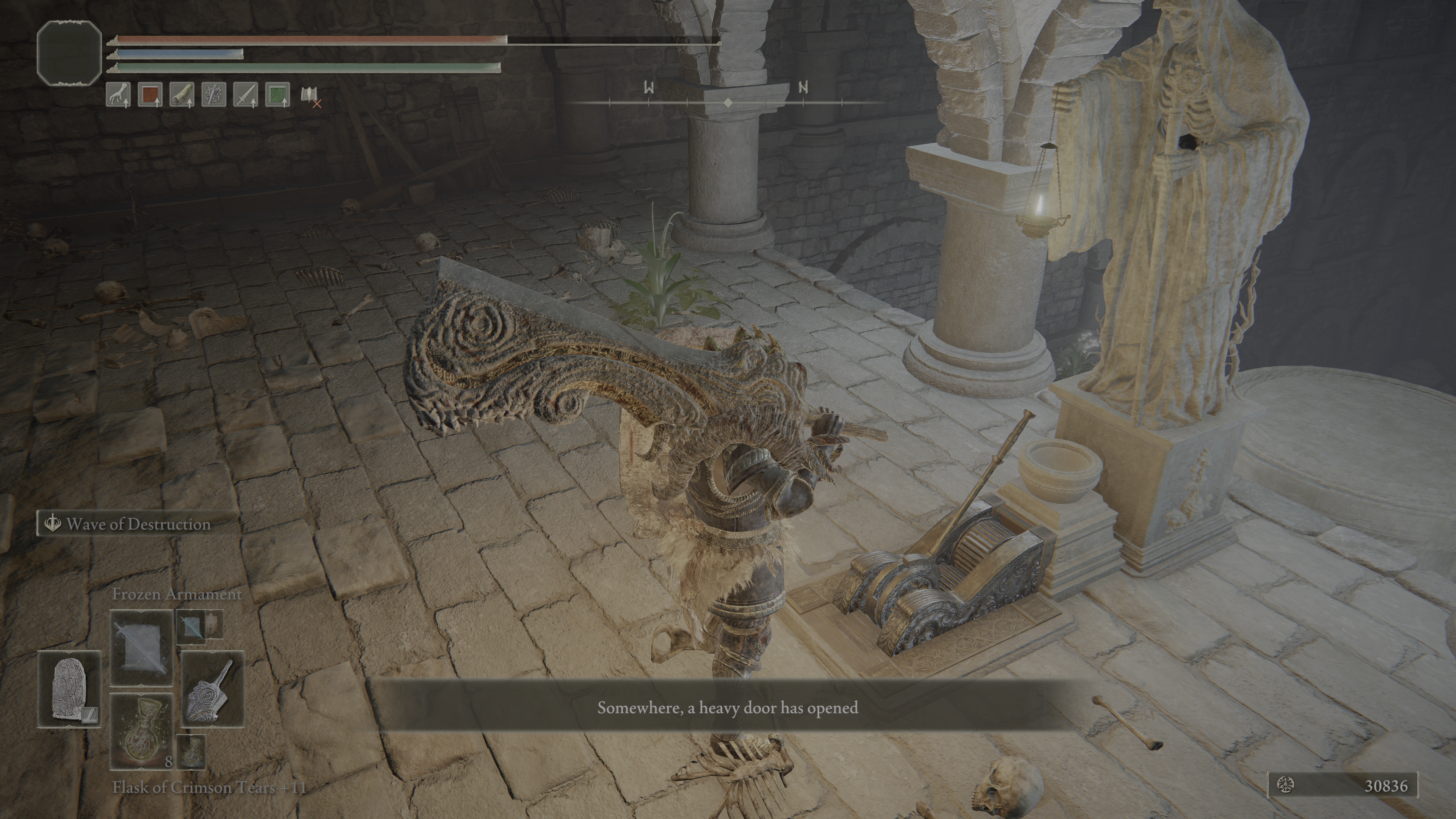 The fight with this boss is without any additional enemies. This boss wields a large axe with two hands, running at their target and spinning their axe. Many of their attacks are slow spinning attacks that players can roll away from to easily get out of range. The boss will occasionally throw their axe at players.

Using Spirit Ashes can make this boss easy to deal with as the additional attacks from the ashes can interrupt the boss' slow attacks making the fight much safer and easier.