Caria Manor is a Location in Elden Ring. The Caria Manor is a large estate found in Liurnia of the Lakes, far to the north. Players can get to the manor by following the main road on the western landmass heading north. Caria Manor is a major dungeon that is heavily guarded and contains many things of note. Defeating the boss and completing this dungeon is required in order to access the northeast sub-region of Three Sisters behind the estate. 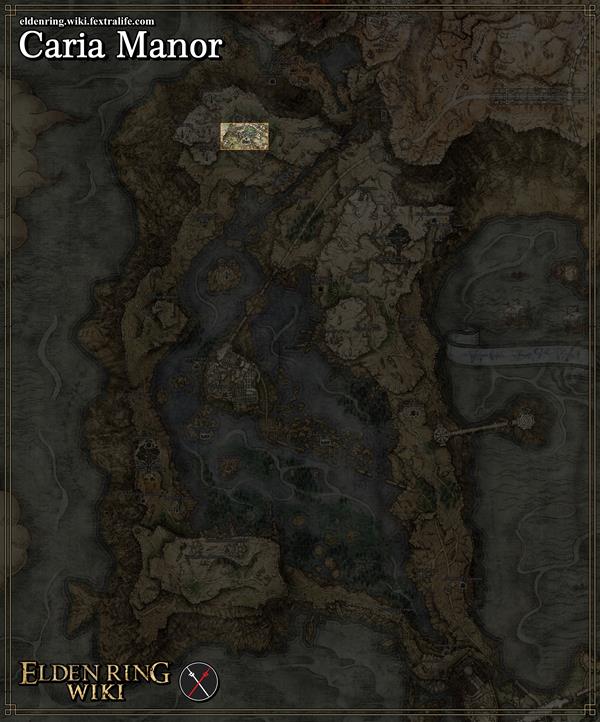 All NPCs and Merchants in Caria Manor

Caria Manor is accessed from its main gate in the south. Beware of the constant rain of glintstone arrows as you approach the gate. The estate's guardian is constantly bombarding the fields outside the manor to deter would-be trespassers. Once you reach the Site of Grace at the main gate, you are safe from these bombardments. When traversing the estate grounds, watch out for Glintstone traps. These are swords buried in the ground which spring a trap that shoots a glintstone projectile upwards when walked on. These traps knock players away which is especially dangerous when on the higher levels of the estate.

The southernmost area of the estate is the Gardens. This is a very large courtyard infested with Fingercreepers and their smaller counterparts. Be very careful when walking around the gardens as these Fingercreeper enemies can cling to the walls of buildings, dropping down onto unsuspecting targets. They can also burrow into the ground and emerge only when prey is nearby.

On the left side of the gardens, you'll find two corpses, one with five Rimed Crystal Buds and another with six Glintstone Fireflies. Walking up the middle stone pathway, you'll find a Golden Rune (4), two Somber Smithing Stone (2), and a Smithing Stone (2). The right side of the gardens is where the exciting loot is at. In a room within a ruin by the rightmost wall is the Glintstone Craftsman's Cookbook (6). Further in the ruin, you'll find the Ice Crest Shield, and as you approach the middle pathway from here, you'll find a Teardrop Scarab that drops the Carian Piercer sorcery. You can also collect a total of five Rimed Crystal Buds from the corpses in the area. Follow the stone path northwest and you'll eventually get to the Chapel.

The Chapel building is an important landmark found in the west of the Gardens. The upper level contains a Site of Grace and leads to the walkways in the gardens that will allow you to reach many different collectibles as well as progress to the manor's upper level. These walkways are guarded by Knight Spirits who appear as you move around the walkways. Be extra careful of glintstone traps up here as they can knock you back down to the gardens. If you want to progress through the dungeon quickly, follow the walkways towards the east to reach a tower with a lift that will take you up to the Manor Upper Level.

Here in the chapel, you can find a corpse behind the altar that has a Smithing Stone (4). Make sure you've grabbed the Manor Lower Level Site of Grace here then exit the chapel and cross the walkways until the path splits. Start by heading down the northern walkway. Follow the path to the end to find a Rune Arc. Look down to the northwest and jump down to the walls below. Jump down again to another section of the wall in the northwest, where you'll find a ladder going down. This ladder takes you to a small room with the Sword of Night and Flame in a chest. Open the door to the west and you'll find yourself in the gardens again.

Make your way back to the Manor Lower Level Site of Grace and follow the walkways again, this time taking the eastern walkway. After turning left at the corner, you'll see a flight of stairs leading to another building. Before jumping down, go straight to head up the stairs and take the lift mentioned earlier to get to the Manor Upper-Level Site of Grace and retrace your steps back. Right at the base of the stairs, look eastward and jump down to the lower section of the wall. Loot x8 Rimed Crystal Buds and head north, where you'll find a Golden Rune (3) under the wooden stairs, then run back up the stairs and start heading south. You'll reach a large open part of the walls with a few Fingercreepers. At the far end of this area is the Urumi. Grab it, then continue following the wall southwest. Defeat or run past the Abductor Virgin at the corner to be able to grab a Somber Smithing Stone (3).

The Manor Upper Level comprises the northern half of the estate. Grab the Site of Grace here then head out the western doorway. You'll find a Golden Seed right in front of you, past the staircase. Before following the path northwest, there's a corpse on the right side of this courtyard with three Rimed Crystal Buds. Right past the doorway at the top of the stairs is an area raised high above the gardens guarded by Direwolves and Wandering Noble zombies. Past the Direwolves, you will find a large stone archway to the east. Beyond this is a long staircase leading up to the final area and boss. However, it is heavily guarded by Lazuli Sorcerers and a Troll Knight. If you look to the south, there is a platform with a ladder that you can climb up which will allow you to circumvent all the enemies at the large staircase as you will wind up behind the troll. Up here you'll be able to find two Magic Grease. Consider using this path if you are rushing through or if you don't want to face a large group of hostiles.

If you choose to fight the Troll Knight, however, he drops his weapon, the Troll Knight's Sword. At the top of the middle staircase, turn hard right and follow the side of the wall northeast, jumping around the corner when you get there. If you jump down to the lower ledge, you'll be able to grab a Smithing Stone (4). Continue up the middle set of stairs, where you'll find more staircases to the left and right, each with a Page enemy. Five Rimed Crystal Buds can be found on a corpse on the left set of stairs.

At the very top of the staircases, immediately turn around and pick up the Golden Rune (4) hanging off of the ledge in the middle of the two staircases. There's a fog door to the northwest, but you can look to the south first to find a hole in the wall. This leads to an area outside with wooden platforms along the walls which you can jump down from safely to reach the cliffside graveyards. There are some collectibles to be found along these cliffs, such as eight Crystal Darts, a Cracked Pot, and a Smithing Stone (3), which are guarded by Living Jar enemies. At the lowest level of the graveyard, look to the southwest and you'll find a ruined section of Caria Manor's walls you can jump down to. On the corpse hanging off of the wall is the Ash of War: Carian Grandeur.

Back at the staircases the Troll was guarding, continue through the stone archway to find a large circular arena-like area surrounded by chairs. Once you step into the center of this area, Royal Knight Loretta will appear before you. She is the guardian of this manor and also the one bombarding the fields outside with arrows. She uses a combination of glintstone sorcery spells and polearm attacks in combat. Defeating her awards the Loretta's Greatbow sorcery spell as well as the Ash of War: Loretta's Slash.

Defeating Loretta will spawn a Site of Grace in her arena and open up the way to the Three Sisters sub-region.

Back of the Manor

After exiting out to Three Sisters, keep heading south, following the manor's walls and the cliffs, until you find a Cerulean Teardrop Scarab. From here, look east and drop down to the ruins of a castle wall below you. On the south side of this wall, you'll find wooden platforms leading east that you can safely drop onto. Scale down the ladder here, and you'll find yourself on the upper balcony of the Chapel you were in earlier. Here, you can find and speak to Pidia, as well as pick up a Spellproof Dried Liver.

Head back up the ladder, and climb onto the roof in front of you to find five Old Fangs. Look down to the southwest, and you'll be able to jump down safely to the wall section below you. Head southeast and down and to your left are some more wooden platforms you can jump down to. Grab the three Slumbering Eggs on a corpse here then jump down to another section of a ruined stone wall. If you head all the way southeast and follow the wooden platform, you'll get to a Giant Crab guarding a Stonesword Key.