Wyndham Catacombs is a Location in Elden Ring. The Wyndham Catacombs is found in Altus Plateau, at the south of the jagged rocky mountains leading up to Mt. Gelmir. The entrance to the catacombs can be found at the very top of Wyndham Ruins, pressed against the side of a cliff.

The Wyndham Catacombs are found at the top of the Wyndham Ruins in Altus Plateau. [Elden Ring Map Link] 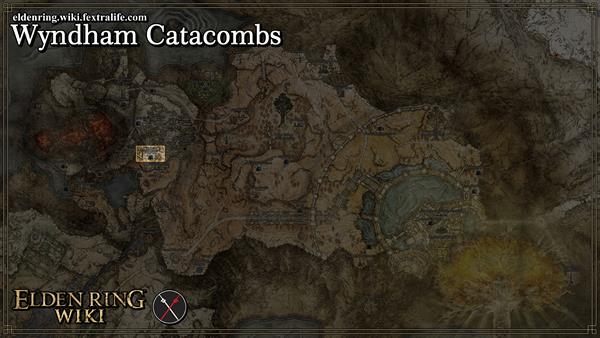 All NPCs and Merchants in Wyndham Catacombs

Reached by travelling east from the Seethewater River Site of Grace.

Leaving the Wyndham Catacombs Site of Grace the only room at the top of the catacombs is the locked door with the 2 statues, locked by some contraption. Moving past this door is a room with an elevator, beware of the trap button between the rooms as this will fire a row of 3 lightning shots 3 times. The elevator is a simple platform with a button that players can step on to get the elevator to move. At the top and bottom of the elevator shaft are levers that will call the elevator to the player when needed.

Once at the bottom of the elevator shaft hit the button once more to have it rise then roll off onto the ledge above to collect the Grave Glovewort on the ledge above. The first room outside the elevator shaft has 2 imps throwing lightning bombs as well as a large guillotine trap cutting the room in half that raises and drops repeatedly. Past this room around the corner is a room with 2 imps, one on the far wall from where you enter as well as one directly on the right of the entrance.

Following the path down the narrow stairs brings you into the large underground sewer area with watery ground and many slimes and skeletons. There is a lightning trap hidden in the water in the middle of the room, stepping on the trap will cause lightning to strike down around the trap, enemies do not trigger the trap but the trap rearms quickly so watch out and avoid the damage. Moving forward and around the bend players will find a Gold Dragon Cult Knight defending the way forward.

At the top of the ladder watch out for the trap on the ground close to the ladder that will fire lightning bolts from behind. There is an imp statue sealing the room ahead and a path leading left, on the crossroad an Imp will attack you so be ready. The sealed room requires a Stonesword Key to open and holds the Lightning Scorpion Charm but otherwise has no enemies or other loot.

The next room in the Catacombs is the room with the spike ceiling and a raising floor platform. If the player is standing on the platform when it is raised to the top, the floor will raise rapidly to stab the player into the ceiling repeating until they are off the platform or dead. This room has 2 imps that throw lightning bombs, one ahead where the player can see is the way forward and one above the entrance. To get across without taking damage from the spikes, step on the platform to make it rise then run across when as it resets, this gives the player more time to move across the room while the mechanism resets and raises again. In this final room is an imp directly on the right of the entrance holding a large sword, as well as another Gold Dragon Cult Knight. The lever to open the locked doors are found here. Similar to getting across the first time, to get out, step on the platform to have it raise then run across while it resets to get above the entrance, then simply wait for the platform to lower and jump down with it to get back to the entrance.

While in the sewer area players can see an area locked behind a rusted gate. To reach this area players have to get underneath the platform in the spike ceiling room. Get the platform to rise at the entrance then walk off and jump down underneath while the platform is moving. From this area a tunnel will lead you to the locked sewer area where multiple skeletons are seen. When you walk to the end of the room where the 2 bodies to loot are, 2 Giant Crabs will rise from below. The tunnel you enter from is too small for them to fit so kiting them there can help make for an easier fight. Once the Giant Crabs are dead you can loot the Ancient Dragon Apostle's Cookbook (1) from one of the bodies. The rusted gate can be opened by a lever on the right.

The boss for these catacombs can be found past the originally locked doors. This is a variant Erdtree Burial Watchdog that has a lightning tail with additional moves and can shoot lightning at the player. The Boss will charge lightning very visibly then fire it at the player giving the player time to move behind a pillar or prepare to time a dodge or block. While in their seated form the Watchdog will float up and towards the player before slamming their sword down, they will also now spin with their sword when close to the player to do damage.

Using Spirit Ashes to help with the fight can be very helpful to direct the attention away from you so you can deal damage freely or find extra time to heal if necessary.