The Capital City, located at the foot of the Erdtree. Despite being partially destroyed by the dragon Gransax, it still holds strong to this day. It houses many strong foes, along with the mysterious Veiled Monarch, Morgott. 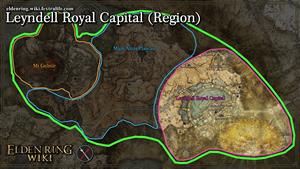 All NPCs and Merchants in Leyndell, Royal Capital

*: Indicates that the item is unobtainable in Leyndell after defeating Maliketh, The Black Blade. Some of these items can be obtained elsewhere, though.
?: Unknown whether or not the item is available after defeating Maliketh, The Black Blade (you can help by confirming or denying the item's existence in Leyndell, Ashen Capital)