Stillwater Cave can be found on the southernmost tip of Liurnia of the Lakes. [Map Link] 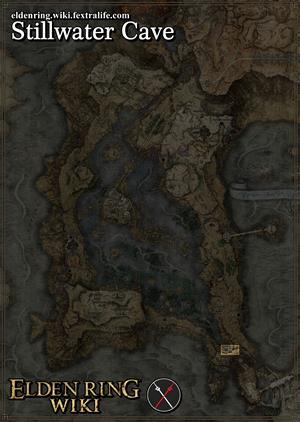 All NPCs and Merchants in Stillwater Cave

Stillwater Cave is a dark cave comprised of many pits where Miranda Sprouts and their giant counterparts bloom undisturbed. It is recommended to bring along a Torch and a handful of Neutralizing Boluses to counteract the poison build-up inflicted by its denizens. The Site of Grace is found shortly after entering the cave.

The cave itself is rather small and there is a very straight forward path you can take to get to the boss. Also be mindful not to roll or dodge when walking on poison water, as poison will get on your armor and hasten and lengthen poison build up.

The Cleanrot Knight is an imposing figure wielding a spear and a sword. After traversing through the mist gate, the boss will almost always run towards you and use his Impale attack. This is his most dangerous move and if the attack connects, he will raise you high in the air, deal tremendous amounts of damage and inflict the scarlet rot status on you. Dodge to the side when you see his spear glowing. Use your best spirit summons to distract him and take potshots at the knight from behind. Watch out for the water on the floor which will rapidly cause you to build up the poison stat. The Cleanrot Knight drops the Winged Sword Insignia upon defeat.

Stillwater Cave is a good source of Cave Moss should you require it for farming. Nearly every stretch of the cave has nodes of this material to collect from. Exploring the cave will also yield a good amount of Budding Cave Moss as well as Crystal Cave Moss crafting items. In general, the Giant Miranda Sprouts are not worth killing as they are highly resistant to magic and release a deadly poison at melee range. It's best to skip these while exploring the cave.