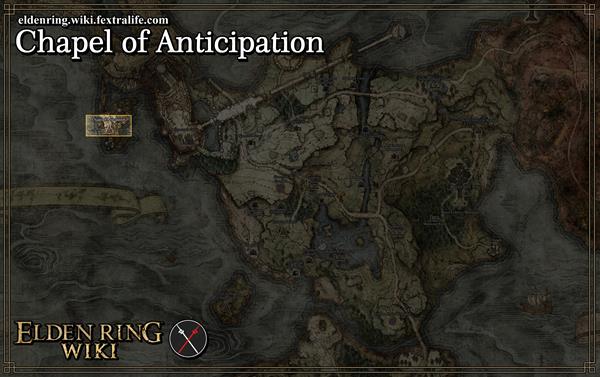 Elden Ring NPCs and Merchants in Chapel of Anticipation

All Items in Elden Ring's Chapel of Anticipation

Chapel of Anticipation Creatures, Enemies and Bosses in Elden Ring

Walkthrough for Chapel of Anticipation in Elden Ring

You'll begin with your newly-customized character inside a chapel, the Chapel of Anticipation. Right off the bat, you will be rewarded with the "The Ring" Gesture (if you pre-ordered the game). Gestures in Elden Ring, are a common feature among the Souls game, they are emotes performed by your character. Look to your right and you will see a body that is glowing. Loot it and you'll find x1 Tarnished's Wizened Finger. Head outside by opening the door, climb down the stairs of your left, and cross the wooden bridge where you'll notice a large statue ahead.

As you approach, the Grafted Scion will come in, leaping from the air to attack you. This boss is optional for you to defeat. Dying to the first boss will teleport you to the next section, Stranded Graveyard.

If you do defeat the Grafted Scion, you'll acquire Ornamental Straight Sword and Golden Beast Crest Shield that you can use later on once you have leveled up and reached the required stats. The path ahead features a harvestable Nascent Butterfly, and ends in a ledge with another (unobtainable) Nascent Butterfly that will collapse and kill you once you step on it, leading to the next tutorial section, Stranded Graveyard.

Please note that it's important you DO NOT jump or roll towards the collapsing ledge, nor should you exit and reload the game after defeating the Grafted Scion, as a bug may result in your hard-earned runes being lost when the ledge falls.

Returning to this location later in the game is possible by way of a Waygate found at The Four Belfries. Returning to the Chapel allows you to challenge the Grafted Scion once more, with a much greater chance of defeating it after leveling up and collecting equipment on your journey thus far. It will drop Ornamental Straight Sword and Golden Beast Crest Shield upon death. You will also be able to explore more of the chapel after returning. Check the southern wing of the Chapel for The Stormhawk King key item. It is found on a corpse on the roof. Opposite this corpse, you can go inside the building onto a wooden platform above the main hall where you can find a chest containing the Stormhawk Deenh spirit ash. You can also obtain Lord of Blood's Favor from the body of the dead maiden inside the chapel.