Leyndell Catacombs is a Location in Elden Ring. The Leyndell Catacombs is a massive underground mausoleum found beneath the Royal Capital. These catacombs are accessed via the Subterranean Shunning-Grounds. From the Underground Roadside site of grace, head southeast into the large area with pipes beneath. Use the pipes to drop down to the very bottom and then head south to find a crack in the wall past the Giant Crayfish. The entrance to the catacombs can be found through the cracks.

This area can also be accessed in the Leyndell, Ashen Capital version of the Royal Capital.

These catacombs are accessed via the Subterranean Shunning-Grounds. [Elden Ring Interactive Map Link] 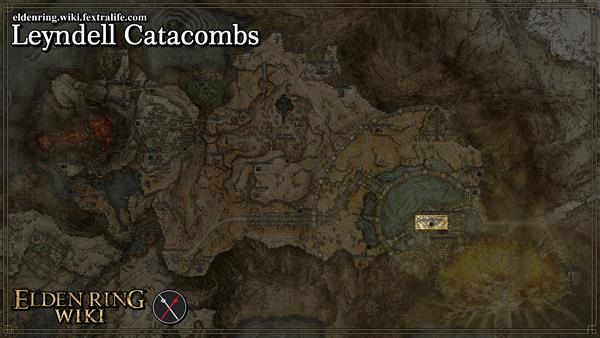 All NPCs and Merchants in Leyndell Catacombs

These catacombs are three loops of very similar paths and enemies, designed to be confusing.

On the first floor right after the Leyndell Catacombs site of grace is a sealed room containing the Esgar, Priest of Blood boss fight. Continuing past the sealed boss room is a coffin in the center of a pool of water. As you continue on there will be a few rooms with enemies and a hall with a flame statue. Jumping onto the flame statue will take you to a balcony with a dead end room containing an Omen and the Crucible Scale Talisman.

Backtrack a bit, then follow the hall that split off just before the flame statue. Up the stairs you'll see a Grave Glovewort (9) and an Omen with a sword. Keep going and you'll end up overlooking a coffin in a pool of water once again. This is the second floor, and the start of the loop.

Jump down and grab the Grave Glovewort (8) on the coffin, being wary of the zombies that will wake up when you do. Run towards where the site of grace would be if this were the first floor, and you'll see an opened set of doors leading to a fake boss room with two Omens and a Grave Glovewort (8) inside.

Head back to the room with the coffin and go up the stairs. As you continue on there will be a few rooms with enemies and a hall with a flame statue, including another Grave Glovewort (8). Jumping onto the flame statue will take you to a balcony connected to a room that resembles the alternate boss rooms in these kinds of dungeons (a chapel). It's not a real boos room, though, so you can safely enter and then turn right to see a hallway and two Imps.

Continue along this path and you will end up overlooking the coffin in a pool of water on the first floor. There will also be a lever here, so pull it to unlock the real boss room's door on the first floor of the Catacombs. Do not jump into the pool if you want all the loot in this dungeon, though, as there is a third floor to explore if you backtrack a bit.

On the second floor, if you climb the stairs that are just before the flame statue, you'll see a third Grave Glovewort (8) before climbing more stairs and running into another Omen. Past that, you'll be overlooking yet another coffin in a pool of water. This is the third floor, so jump down and climb the stairs out of the room, which leave to a Ghost Glovewort (6). Further down the hall you'll pass the fourth Grave Glovewort (8) on the way to where where you'd expect to find a fire statue. That room instead contains just a Grave Gravewort (9), but there's also an Omen waiting to ambush you from above. Continuing on, you will come to a window overlooking the set of double stairs on the second floor.

Jump down there, go back up the second floor's flame statue to reach the jump down to the first floor's coffin pool, and then head to the grace to prep for Esgar, Priest of Blood in the now-unlocked boss room.

Those looking for the Haligdrake Talisman +1 will find it up the elevator from the site of grace, on a corpse near a Lesser Spirit-caller Snail in the opposite direction of the dungeon proper. This is the path that leads to the shortcut back to the Subterranean Shunning-Grounds.