Redmane Castle is a Location in Elden Ring. The Redmane Castle is found in Caelid. It can be reached by crossing the bridge in-front of the "Impassable Greatbridge" site of grace. Follow the path upwards to the castle gate. Circle behind the castle using the path on the right hand side. After disposing of some enemies, there is a gap that you must jump across, it is recommended to use your mount for this section. There will be a small series of stairs leading to a shortcut, a door that can be opened only from the other side. To access the castle itself, you must climb up the ladder near said shortcut.

Redmane Castle is found in the southeast portion of Caelid. [Map Link] 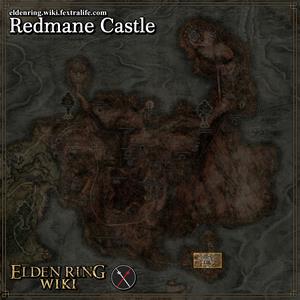 All NPCs and Merchants in Redmane Castle

Redmane Castle has two states. At the start of the game, it will be populated with enemies, all rooms will be reachable, and the final plaza will contain the Misbegotten Warrior & Crucible Knight boss fight. However, at some point during the game you will trigger the Radahn Festival which will change the state of the castle considerably. There are three ways to trigger this:

Once the festival is active, all the soldiers in the castle and its surroundings will vanish, the waygate from the Impassable Greatbridge site of grace to the Chamber Outside the Plaza site of grace will activate, a number of doors will be locked, and the plaza will contain a number of NPCs preparing to partake in the Radahn Festival, including Blaidd and Alexander. Finger Maiden Thorelina will give you the Polite Bow gesture if you speak with her. Talking to Jerren in the plaza will allow you to battle Starscourge Radahn. Once Radahn is defeated and you speak to Jerren inside the chapel beyond the plaza (and then rest at a site of grace), the Radahn Festival will end and the castle will return to its original state.

This walkthrough describes how to traverse the castle during the Radahn Festival. There are additional items, including the Red-Hot Whetblade, available when the festival is not taking place.

The fastest way to reach Redmane Castle is by using the waygate teleporter found on the watchtower of Fort Gael [Map Coordinates]. When you arrive, you'll find yourself outside the fortified outskirts of the castle. Work your way around the cliffs via southwest since the main gate is locked. By the cliffs, you should see a makeshift tower used to store weapons. Climb down two ladders and you'll find a corpse that can be pillaged to acquire x1 Smithing Stone [6]. Climb back up both ladders and continue along the cliffs of the castle.

Along the path of the cliffs, you'll encounter Giant Bat enemies. Keep moving southeast as you reach the top and around the castle where you'll come across a field full of tombstones and large tree without its leaves. You'll encounter a few enemies here such as more Giant Bats and a Poisonous Bat by the tree, but more importantly, a Teardrop Scarab, hiding between some tombstones on the left. Make sure to quickly kill the Teardrop Scarab to obtain x1 Ash of War: Flaming Strike - make sure to check behind the tree to find x1 Miquella's Lily and x8 Smoldering Butterfly that is looted off a corpse that is sitting against a tombstone.

From here, use the ladder to climb to the top, you don't need to take the stairs since the door at the top is locked and can only be opened from the other side. At the top of the ladder, make a left and simply follow the path of the rooftop section until you reach another ladder on the west that you'll need to climb down. At the bottom, you'll first encounter a Zombie Dog roaming. Kill it and enter the stable-like room on the left where you'll see multiple Commoner enemies resting (most of them will not attack you unless you do). Inside that room you can loot two corpses to find x5 Armorer's Cookbook [5] and x1 Smithing Stone [5]. Don't forget to unlock the door here to open the shortcut leading back to the open field with tombstones.

Go back outside, turn left and you'll see another arch doorway. Inside that room, there is a single Executioner-looking enemy that wields a crossbow. You can kill it to acquire some Runes but there isn't anything inside and the door here is locked. Use the bricks and rubble to jump over a low part of the wall and down into the clearing below.

Upon landing, look to your left to find a guardhouse. Go up the stairs and check behind the wooden crates to find x1 Golden Rune [6] that is looted off a corpse. Go back down and head east first towards the entrance of the plaza, there are two Lion Guardian enemies at the north section leading to the main gate that we can ignore for now. Midway up the steps, you'll see a waygate teleporter. Walk past it, and continue through the courtyard past the wooden stakes and go inside the room on the right to find the Chamber Outside the Plaza Site of Grace. After discovering the site, go back outside and check the west section. Go up the stairs to another rooftop where you can find a corpse sitting against some wooden crates. Loot it to find x1 Smithing Stone [4].

Go back down towards the west part of the castle where you'll see a hangman's gallows. You'll notice that you are on high ground and you can attack the two Lion Guardian enemies below that are roaming around the castle's main gate. Killing both of the enemies rewards you with Runes along with x2 Somber Smithing Stone [4], x2 Beast Blood, x4 Old Fang. Jump down once the area is clear and loot a corpse that's on a pile of dead bodies and skeletons to find x1 Smithing Stone [4].

Check the tree near the gate to find x1 Arteria Leaf and a one Skeletal Slime enemy. Most of the buildings here with the doors are locked, so check the area near the south corner to find a glowing Teardrop Scarab, which will refill your flask if needed. If you haven't discovered the Imapssable Greatbridge site, head back to the waygate teleporter that you passed before, and use it to transport yourself past the heavily-guarded greatbridge, near the Impassable Greatbridge site [Map Coordinates] - after touching the grace, use the waygate to transport back to the castle's plaza.

From the waygate, head north through the doorway, past the site of grace, and enter the plaza where you'll encounter the NPCs gathered for the Radahn Festival. Talk to Therolina to get the Polite Bow gesture, then go north, up the stairs, then towards the right where you'll see a large sculpture of a chalice. There's a body on the left side of it - loot it to find x1 Somber Smithing Stone [5]. When you are ready to start the festival, turn back in the direction you just came from and speak to Jerren on the right side of the stairs. A cutscene will trigger.

After the cutscene, run up the stairs opposite the crier and enter the chapel where you can loot a body for x1 Smithing Stone [6]. Leave the chapel via the eastern door, and you'll see a lift. Ride it down and at the bottom you'll find a waygate teleporter and a Stake of Marika next to it. The waygate teleporter will transport you to the boss arena at Wailing Dunes, where you will fight Starscourge Radahn. 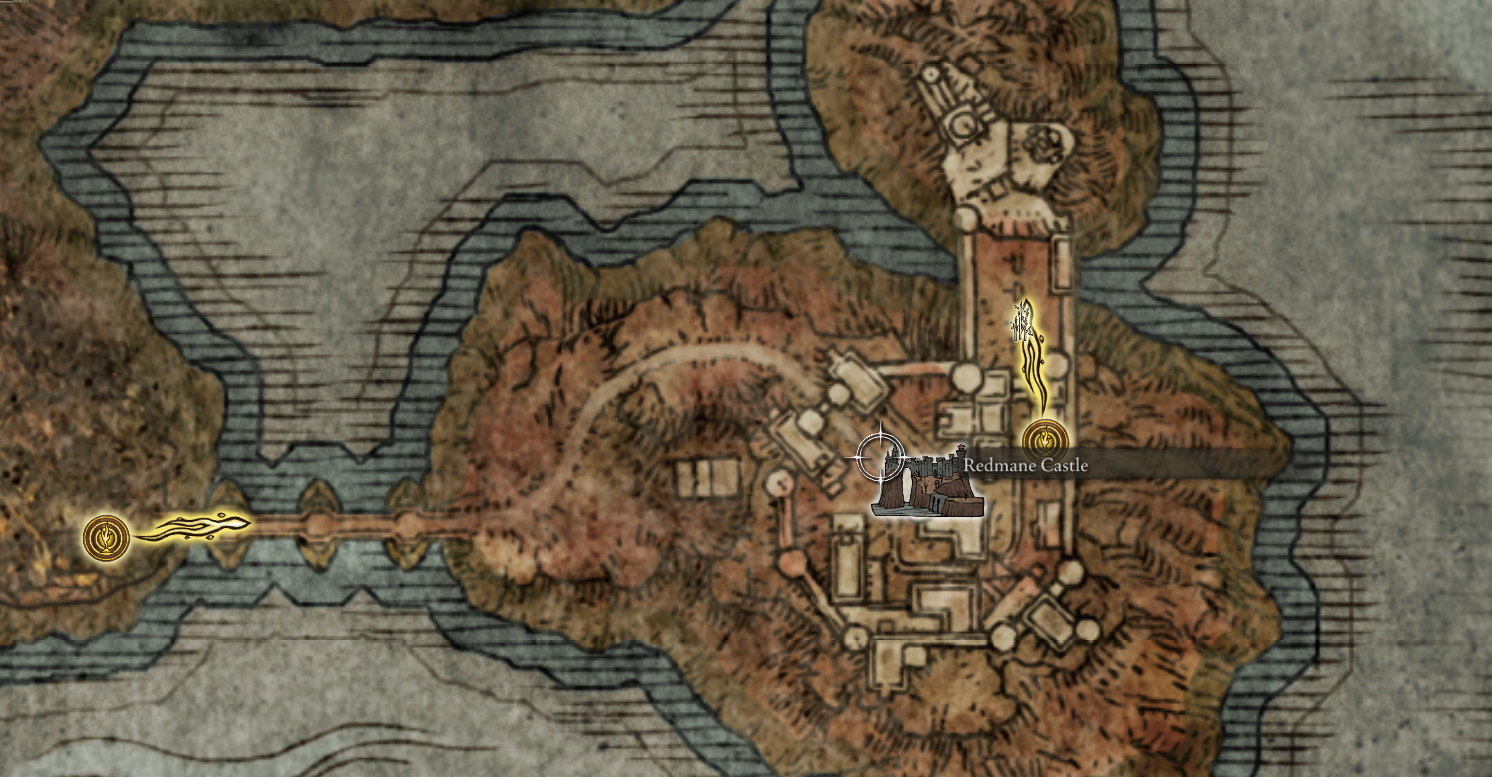