Sellia, Town of Sorcery is located in Caelid just east from the Rot Swamp. See the exact location in our Elden Ring Map. 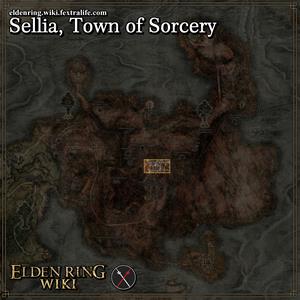 All NPCs and Merchants in Sellia, Town of Sorcery

All Items in Elden Ring's Sellia, Town of Sorcery

Sellia, Town of Sorcery is a massive ghost town on the eastern side of Caelid. These ruins are chock-full of collectibles to find. However, exploring this location can be quite perilous as it is filled with Ghostly versions of Noble Sorcerers, Raya Lucaria Sorcerers, Twinsage Sorcerers and Raya Lucarian Wardens. While they use mostly the same attacks and boast the same behaviors as their physical counterparts, the thing that sets them apart is that they are invisible until you are near them, which prevents you from targeting them until they are seen. Furthermore, they can fire their spell projectiles while remaining invisible. Some of them can even teleport away from you. It is highly recommended that you call on a Spirit Summon while exploring. Your summons can detect invisible enemies and will usually rush towards them and draw their fire.

There are several small rooms on the outsides of the buildings here that are initially sealed by a barrier which can be dispelled by lighting a brazier on a tower. There are three such braziers in this town and your first priority should be to find them. Make a bee-line straight for a very large staircase in the northeast section of town. Halfway through the staircase, you can find a large root jutting out and extending to one of the buildings to the right. This is the easiest way to get onto the rooftops where several collectibles can also be found. You will be jumping from building to building and occasionally some roots to navigate the rooftops. Remember that you can always summon Torrent for his double jump capability should you find the platforming too difficult.

From the first building connected to the staircase root,  get onto the next building in the west using another root extending towards it. Now jump onto the building to the south, you should be able to land the corner of the roof. Look at the building southwest from here and take out the Marionette Soldier sitting on the roof and then jump onto the lower roof of  that building. You can get to the higher roof via the root wrapping around the west side of it. Continue on south and jump on the branch of the gigantic root you see ahead of you. Watch out for a Marionette Gargoyle swooping in from the left. Look at the western end of the gigantic root to find a Teardrop Scarab which drops the Ash of War: Double Slash. Now follow the gigantic root east and up on a building and then turn to the south and jump over another root to land on the roof of a long building. Follow the roof west to find a corpse sitting on a ledge. You can loot a Stonesword Key off this corpse. Continue west and you should be on a roof with a ladder leading up to the southwest brazier. Light it up to unlock several barriers in town.

Go back down and across through the long building and climb up the gigantic root here. Follow it northeast to get to another tower with another brazier. This unlocks a barrier at the top of the staircase from earlier. Go around the tower and jump down the roof of the building to the north. Follow this long stretch of roofs to the building at the end which has a corpse on top from which you can loot the Cerulean Tear Scarab helm.

Now you can drop down to the ground level and go through the central alleyway. Look to your right to find a large red painting under some rubble. Inspecting it gives you the Redmane Painting. Continue north through the alley and look to your right for a formerly sealed room with a chest containing the Night Comet spell. At the end of the street, head northeast and look for another formerly sealed room with a chest that contains an Imbued Sword Key. Now head back to the large staircase from earlier and follow it all the way up to find a Phantom Tree with a Golden Seed underneath. From the tree, face the southern edge of the platform and drop down onto the root below. Follow the root and jump onto the building on your right using the mutated growth as a stepping stone. There should be another ladder here that leads to the third brazier. Lighting it unlocks the boss door in the northwest but before you head there, get back onto the root and stand at the very end of it to jump on the building to the south. Drop down onto the balcony on the right to loot the corpse for a Staff of Loss. Check the room directly under this balcony for a chest containing the Spelldrake Talisman +1. If you head down the steps west of here and follow the walls north, you can find a dilapidated building with some Rotten Strays nearby. There is a corpse with the Rotten Stray Ashes in here.

That covers all the notable loot in the town proper. There are other things to find in the area, but they are mostly consumables/crafting materials. Check our Interactive Map for this town to get a better sense of where everything is located.

When ready, go back up the steps and proceed to the northwest, past the giant staircases, through a very tall stone arch to find the boss door.

This is a Duo Boss fight. There is nothing too notable about these bosses. Using a decently leveled summon will make this quite the trivial encounter. The Swordstress uses a sword with a whip-like function to attack at medium range while the Priest uses spells from afar. Both are highly susceptible to magic damage and are easily staggered out of any combos they can potentially perform. Upon defeating the duo, you are awarded the Nox Flowing Sword which is the same sword the Swordstress uses. Check the building to the north of their chamber for a chest that contains Lusat's Glintstone Staff which is the weapon that the Priest was using.

After defeating the bosses, head back to the large staircase and through the previously sealed archway to find the Sellia Backstreets Site of Grace.