IF YOU ARE STUCK HERE: take a right from the shack you spawned at, and run down the stairs then take a left and drop down, hit the site of grace. Now walk out of the cave and teleport back. If you need to ride back, use the Interactive Map to guide you. 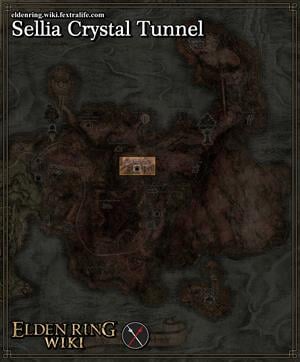 All NPCs and Merchants in Sellia Crystal Tunnel

You can reach this location (and by extension Caelid) early by opening the chest in Dragon-Burnt Ruins. It will envelop you in smoke and transport you to the mine but be warned, the enemies within may be too difficult for you at this time.

This section assumes you reached the dungeon naturally by exploring Caelid. From the Site of Grace, head north and up the ladder to reach a large cavern with many Glintstone Miner enemies mining for crystals. These enemies are weak against magic and piercing attacks but resistant against other attack types. You can ascend by heading up the slope on the right but be careful of the Lesser Kindred of Rot (Pests) along the way. There is one standing atop the storage shed on the left. When you reach the top of the path, head for the end of the wooden walkway on the left and kill the Lesser Kindred on the way. At the end of the walkway is a corpse with a Rune Arc. Opposite the walkway, you can find a Smithing Stone (5) on the wall behind some creates. Head back to the storage shed with the Lesser Kindred that you passed on the way and jump up on its roof to reach the wooden platform in the east and drop down the edge of this platform to proceed.

In the tunnels ahead, beware of an ambush by a Glintstone Miner and pick up the Smithing Stone (5) on the ground on the left. In the next section, climb up the ladder and go around the wooden walkway to find a corpse with a Somber Smithing Stone (4). Head north and take out the Lesser Kindred above the storage shed ahead. A Glintstone Miner will also come out the side towards you. Check the shed for a chest containing the Rock Blaster spell. Go around the shed and take the ladder to the roof. There is a Golden Rune (4) on a corpse by the ladder. Kill the Glintstone Miners on the roof and head west to spot a tunnel. There is a Somber Smithing Stone (4) before the entrance to the right.

When you enter the next section, be careful of an ambush by a Lesser Kindred of Rot in the wooden structure to the left. There's a corpse with a Dragonwound Grease in front of the room and a Somber Smithing Stone (4) inside the room. There are two more Lesser Kindred on the elevated platform to the northeast. Take them out and collect the Faithful's Canvas Talisman on the corpse by the wall and the Smithing Stone (5) to the left. Head back down the raised platform and through the tunnel to the southwest and through the large wooden gate to engage this dungeon's boss.

The Fallingstar Beast is a massive quadruped made up of crystals or rock. It has a long spiky tail and a head reminiscent of a centipede's, with massive mandibles extending from its face. Because of the boss' size, you will have little room for maneuvering. The main attacks to watch out for are its head swipe combo, in which it bashes its head from side to side multiple times as well as its charge attack, in which it dashes towards you three times, quickly changing directions after each charge. The beast can also cause the ground to erupt in a rock burst. This is telegraphed by lightning forming on its mandibles, as well as on the ground, indicating where the ground will burst. The key to defeating this boss is to constantly be on the move and attack during its long recovery animations.