Abandoned Cave is a Location in Elden Ring. Abandoned Cave is located in Dragonbarrow, Caelid, east of Smoldering Wall Grace on the eastern wall of the canyon, and slightly northwest of the Sellia Evergaol. The location is only reachable by approaching from the west and crossing the canyon using a tree.

Found in midlands Caelid. See it on the interactive map by clicking on [Elden Ring Map here] 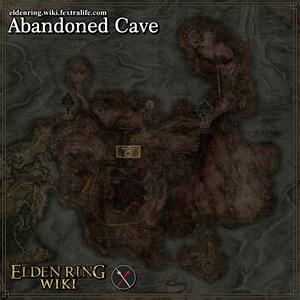 NPCs and Merchants in Abandoned Cave

All Items in Abandoned Cave

The Abandoned Cave entrance is located on the eastern wall of the canyon in Caelid, slightly northwest of the Sellia Evergaol. It can be reached from the Smoldering Wall Grace by walking across the tree (could be Erdtree roots?) that spans the canyon.

When crossing the canyon on the tree, there is a protrusion which curves diagonally from left to right (relative to the player's direction, when crossing the canyon from west to east). Stick to the left side of the tree during the section where this protrusion moves to the right, as the right side is not walkable and will result in slipping off the tree and falling to death in the canyon (if this happens, the runes will then need to be retrieved from the tree, instead of from the safety of the cliffside).

The dungeon starts with a one-way drop into a deep pool of scarlet rot. Proceeding left after the drop and past the geysers of rot, the player will reach a fork. On the right, past another geyser, is a dead end containing a Dragonwound Grease. The left leads to a dry tunnel, which slopes downward to the next room. The martyr effigy (to enable summoning) is located on the left at the bottom of this slope.

The next room contains, once again, a pool of scarlet rot below and a few geysers. After entering, an item is visible below; the Serpent Bow. To it's right, a Servant of Rot will be standing on some dry land, behind which is the path forward.

The tunnel leads down a few steps, then widens into a room with a Rat and another Servant of Rot. The tunnel then curves right into a small room with two rats and a Fire Grease on a corpse.

Continuing onward, the tunnel opens into a large room with a Giant Miranda Flower (scarlet variant) in the middle with a few shallow pools of scarlet rot on the right edge of the room. Approaching the center of the room causes smaller Miranda Flowers to pop up from the ground. To the left, there is a pile of broken Iron Virgins which can be climbed to reach a ledge with the Venomous Fang. On the opposite side of the room is another ledge with two Servant of Rot. Behind them is a short tunnel that leads to the boss.

A pair of Cleanrot Knights (one of each variant) can be found in a large room containing mostly dry land, with a shallow pool of scarlet rot near the entrance.

Upon defeat, the Cleanrot Knight pair drop the Golden Scarab talisman and 7000 runes.