Divine Tower of Caelid is a Location in Elden Ring. The Divine Tower of Caelid is found in Dragonbarrow. Players can reach this location by heading northeast from the Dragonbarrow West Site of Grace (or the closer Isolated Merchant in Calid). This tower cannot be accessed by conventional methods and will require careful platforming starting from the roots that extend from the Dragonbarrow plateau towards the tower's sides and using the ledges and ladders along the side of the tower. 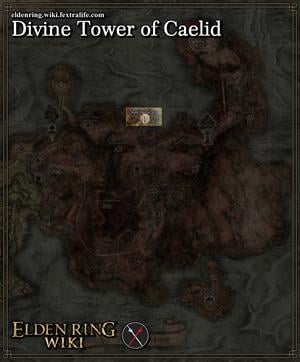 All NPCs and Merchants in Divine Tower of Caelid

All Items in Elden Ring's Divine Tower of Caelid

This tower is best visited after defeating Starscourge Radahn and acquiring his Great Rune.

To get into the tower, summon Torrent and ride off towards the tower in the northeast from the Dragonbarrow west Site of Grace. On the way, you can find a Teardrop Scarab on a dead tree root protruding out of the ground, kill it to get a Somber Smithing Stone [8]; be mindful that this scrab will explode on kill, so dodge out of the way after. Continue northeast.

At the edge of the plateau, you will see a large root protruding from the cliffs towards the tower. Jump onto this root and follow it high enough til you can safely jump towards one of the tower's ledges to the left. Beware of the knight on this ledge and take him out carefully. Note there are a couple of paths to choose & items that can be collected ahead. Take the ladder up, & if you walk to the right you can find a foot soldier holding a torch on the ledge below next to a ladder. If you move past him & continue around, you will find a Stonesword Key being guarded by a soldier wielding a spear & tower shield. You may now return to the first pair of ladders and walk on the ledge to the left jump across the triangular ledge which has two cracks. Note that you can still summon Torrent at this point, whom you can use to perform a double jump if you aren't confident platforming on your own. Go around the next section and kill the knight sitting on the ledge. There is another triangular section ahead with two cracks on the right side and another one on the left. There is another ledge on the next section with a ladder. Before climbing up, perform more jumping on the ledges to the left then to find a corpse with Numen's Rune. Return to the previous ladder and climb up to find the Divine Tower of Caelid: Center grace site. Note: you can also proceed directly to the site of grace first & then return down the final ladder & use Torrent to double jump left to reach the Numen's Rune with ease.

Head west from the Site of Grace and up the steps to find the door towards the main tower lift. Note that the door is on the left side of the corridor and can easily be mistaken by the engravings on the center wall. Step on the platform in the middle to ascend the lift and then follow the steps around the balconies to reach the top floor and restore power to Radahn's Great Rune.

There is a boss to be found at the base of the tower. To reach this location, head east from the Center Site of Grace and down the steps. You will encounter two Redmane Knights here and a locked door at the end. Look down below to the right to find a long concrete platform you can jump down to. Look behind you and you will find narrow ledges along the walls that you can walk on. Walk towards a second concrete platform on the left and jump on it. It will break and come crashing down a few levels below but don't worry, you will not suffer fall damage from this.

Walk over to the thinner portion that the platform crashed on and carefully drop down to the wider platform below. There is a corpse here with a Golden Rune (12). Walk towards the center of the platform and look down at the right (north) side to find an unlit lamp sticking out the tower's center. Carefully jump onto this lamp and then onto the concrete platform below. Jump onto the half-beam next to you and then down the two half-beams ahead and below that one. You should now be closer to the tower's center with a knight to your left. Take him out with ranged attacks if possible and then head to where he was and ride the cage elevator up.

You will arrive on a balcony with a long ladder to the right. This ladder leads up to a room where you can unlock the door from earlier to gain a shortcut in case you die in the next section. Head back down the ladder and continue along the corridor to find a Blackflame Monk patrolling the hallway. Be careful as his spells are very powerful and he is quite nimble with his blade as well. After defeating the monk, check the corpse at the end of the corridor for a Rune Arc. To the left of the corpse is another ledge running along the outer walls. Follow it to another concrete platform below that you can jump on. This one will come crashing down as well but again, you will not suffer fall damage despite the very long fall. There is another cage elevator here that will take you to the basement. You can find the Basement Site of Grace after descending the lift. From here, head down the steps to fight another monk and you will have arrived at the boss door.

The Godskin Apostle is a powerful boss equipped with a twinblade that has a sickle-end for slashing and a blade-end for thrusting and stabbing. He utilizes Black Flame spells similar to the monks earlier in the tower. When fighting this boss, you want to maintain a medium distance to avoid many of his attacks and only close in during openings. His melee attacks have a bit of weight to them and he does short wind-ups before attacking, similar to but not to the same extent as Margit at Stormveil.

Some notable attack windows are when he performs his Stab & Slash; he has a moderate recovery time after the second attack in which you can safely get one or two hits in. Another one is his Jumping Overhead Slash which has a slightly longer recovery than other attacks and can guarantee 2 hits for you. These two attacks are relatively easy to dodge. The attacks you should watch out for are his Black Flame as it travels quite quickly, you should dodge as soon as you see the casting rune; and his Stab & Pull which hits twice for massive damage. Another move he may use is the Spinning Weapon in which he twirls his blade in front of him as he advances forward. Maintain your distance or dodge through and behind him.

When his HP is lowered to 60%, he will float upwards briefly and then slam down, creating a shockwave around him, signifying his second phase. Get away from him when you see him float. From  this point, he can unlatch the skin of his upper torso from the rest of his body and fling it around to greatly extend his reach as well as unlock new abilities. His notable attack windows during this phase is when he uses the Flight variant of Spinning Weapon, in which he flings his upper torso outwards while spinning his weapon. His lower body remains stationary and if you can dodge through his weapon, he will be vulnerable to attack from his elongated abdomen to his legs for the duration of the attack as his torso is locked in the animation.

He will also frequently use a Plunging Blade & Sweep move where he flings his torso upwards and then slams down with his weapon, followed by a very wide sweeping slash. Both hits are easy to read and can be outranged or dodged and he is vulnerable for a couple of seconds after the sweep. Lastly, he can perform a Black Flame Whirlwind attack where he twirls his weapon in place, creating a whirlwind extending outwards all around him. The attack culminates with him plunging his blade into the ground and causing the whirlwind to burst and extend outwards a short distance from its initial edge. Do not stand too close to the edge even when the whirlwind has stopped moving. The Godskin Apostle seems susceptible to magic damage and his poise can be broken rather easily by using multi-hit spells such as Glintblade Phalanx or Glintstone Stars, allowing you to get a critical attack in.