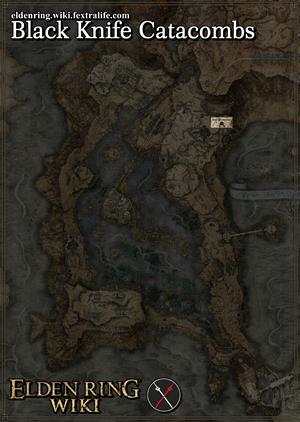 All NPCs and Merchants in Black Knife Catacombs

The Black Knife Catacombs features many skeleton enemies and multiple moving guillotines throughout its chambers. The sewers are infested by crabs, with 2 giant crabs waiting for unsuspecting prey. This catacombs even has 2 bosses found in different rooms and with different loot, the Black Knife Assassin fight is not necessary for the player to advance through to find the lever that opens the doors to the Cemetery Shade fight.

Many of the skeletons that are found in this Catacombs exhibit a strange behavior of rolling at the player, and attack quite rapidly. Players should be careful when fighting these enemies as they can be very fast to close the gap and attack. Some of the skeletons are also special in that they cannot be killed by themselves, instead, one has to defeat the nearby necromancer which kills the skeletons automatically and permanently (until you rest or die).  Going down the stairs from the Site of Grace there will be one such skeleton half way down. You can watch how this skeleton moves and attacks to learn what to expect from them later on, move back up the stairs to make the fight more manageable.

Once at the bottom of the stairs you will find the locked doors of the catacombs, flanked by 2 statues. These doors will open when you use the lever found at the end of the catacombs, the doors lead to the final boss fight of the catacombs. On the left is the way forward down a short flight of stairs. At the bottom of these stairs are 2 more skeletons, one at the crossroad and one further down the tunnel who will start rolling towards you rapidly once they spot you. Again, moving up the staircase can help with the fight to bring them into a wider fighting area or help with kiting them.

The first left on this tunnel is the room sealed by an imp statue, use a Stonesword Key here to open the room. Inside you will find 2 skeleton enemies on the left side, on the body leaning against the tombstone in the room you will find the Rosus' Axe.

Heading forward will bring you to the room with multiple guillotines, as well as 2 skeleton archers. Running past this area will lead you to a corner room with another rolling skeleton and a ladder to go down to the sewer level. In the sewer level there are many small crabs that are non-hostile, they will drop crab eggs when killed. From here you can also see the lever below the lit statue kept behind the rusted bars, the way to get behind the bars is elsewhere. Going forward will trigger the Giant Crabs to rise up from the ground, one in front but also one behind the player. A Rune Arc is found at the end of the sewer area.

To advance in this Catacombs, the player has to go to the room with the multiple guillotines and then ride a guillotine blade upwards to land on the platform above. Kill the skeleton archers in the room to stop them interfering. In the tunnel connected to the platform above are 2 enemies in a small space, carefully dispatch them to proceed to a long and large room with many statues of Erdtree Burial Watchdogs and multiple enemies. Keep following the path and the wall at the end of the path will disappear when attacked, revealing the golden veil for the fight with the Black Knife Assassin. There is a Golden Summon Sign before the fight that will allow you to summon D, Hunter of the Dead to cooperate with you for this fight.

On the right side of the room with the vanishing wall is a small shaft behind a Grave Glovewort. Falling down this shaft will put the player at the lever to open the locked catacomb doors. There you will find the Ghost Glovewort as well as two skeleton enemies and the lever to open the rusted gate to lead you out.

For this fight, using the Golden Summon Sign and bringing D will greatly ease the fight by having another character tanking and being focused by the boss. The Black Knife Assassin boss is fast moving, dodging many attacks as they move. They have 2 distinct attacks that are easy to predict and dodge. When their arm glows red they will fire out a red projectile at the player, they also occasionally jump up high with a large jumping attack that is easily sidestepped. Defeat this boss to obtain the Assassin's Cerulean Dagger as well as the Black Knifeprint and 3150 Runes.

The fight with the Cemetery Shade features multiple skeleton enemies that assist the boss. The fight can get very dangerous when surrounded by them and hit with the green projectile from the boss, binding the player in place. The Cemetery Shade boss also has short blinks that allow it to dodge attacks as it approaches the player to attack in melee. Position yourself around the pillars to use them to absorb the binding projectiles as these move quite fast and may be hard to dodge naturally. Defeating this boss will reward you with the Twinsage Sorcerer Ashes as well as 3500 Runes. There is a chest in the room with a Deathroot found inside.