Cathedral of the Forsaken Map

Subterranean site of grace. In the room where you fight Mohg, The Omen. Elden Ring Interactive Map Link.

All NPCs and Merchants in Cathedral of the Forsaken

No NPCs are present in the Cathedral of the Forsaken.

All Items in Elden Ring's Cathedral of the Forsaken

Elden Ring Cathedral of the Forsaken Creatures, Enemies, and Bosses

Cathedral of the Forsaken Walkthrough

The Cathedral of the Forsaken is the boss arena for Mohg, the Omen. Defeat him to get the Site of Grace to appear. The chest at the altar contains Erdtree's Favor +1.

The area behind the altar is an illusory wall. Breaking it leads to a labyrinth full of Frenzied Nomads and their corpses, ultimately leading you to Frenzied Flame Proscription. However reaching the proceeding area requires defeating Morgott, otherwise a golden seal appears just past the altar which reads "Sealed by Morgott the Grace-Given".

Enter the area and cross the wooden planks to descend to the lower levels. You may notice a few tents on the way - these can be broken by the wandering Nomads' Frenzy attacks. The first one you find contains the Nomadic Merchant's Set, while the next one has 5x Eye of Yelough. You'll eventually reach a point where you need to drop between two perpendicular planks before you can proceed further; the Frenzied's Cookbook (2) can be obtained in an alcove after you've dropped to the lower plank.

You'll be at the last wooden beam on the southern side of the shaft. There'll be a Nomad on the final southern platform playing a violin. Where this enemy is is exactly where you need to drop off to start dropping down the gravestones on the eastern shaft wall. Look carefully and you will see a tiny gravestone jutting out in the corner - carefully walk over without jumping or rolling to drop onto that gravestone.

From this gravestone, the next one to drop onto is further down on the eastern wall. Face your character to the southern wall and backstep. Ensure that you're positioned and angled properly to not bump the geometry on the way down.

It is possible to skip the platforming with Longtail Cat Talisman, however, you will not acquire the incantation hanging at the lowest platform before the floor. Simply have it equipped and jump down, you will fall to the floor causing you to die and break the floor. Respawn and jump again to reach the floor unharmed (the talisman is not required after breaking the floor).

Then, face north and backstep. You should fall onto the next gravestone without issue. Face south and backstep again, and this should land you on a gravestone with a corpse holding the Inescapable Frenzy Incantation. Walk into the hallway, turn right. Beware of the nomad that is sitting facing the dark corner.  Pick up the Fingerprint Stone Shield at the end of the corridor. Behind the breakable tent here is Note: Miquella's Needle. From the lowest possible level, you can safely jump to the floor - it will crumble and you will land in the Frenzied Flame Proscription. This is Hyetta's final quest location, and there is a Site of Grace nearby too.  You can also speak to Melina here.

To the left of where Hyetta is standing is an illusory wall.  Roll into the wall to reveal a short corridor with a chest at the end.  The chest contains 1x Rune Arc. The wall behind the chest is also an illusion. Rolling into it opens up the passage into a large cavern.  Drop down to arrive at the Root-Facing Cliffs site of Grace, part of Deeproot Depths. 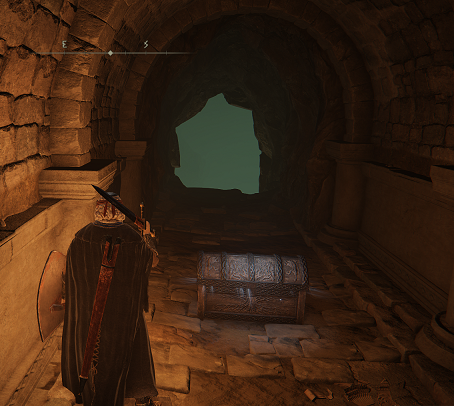 Elden Ring Cathedral of the Forsaken Gallery and Notes