Gatefront Ruins is a Location in Elden Ring. The Gatefront Ruins is found in Limgrave. Players can reach this location by heading north from the Network Test starting point, and will likely be guided here as it's the path to Stormveil Castle. 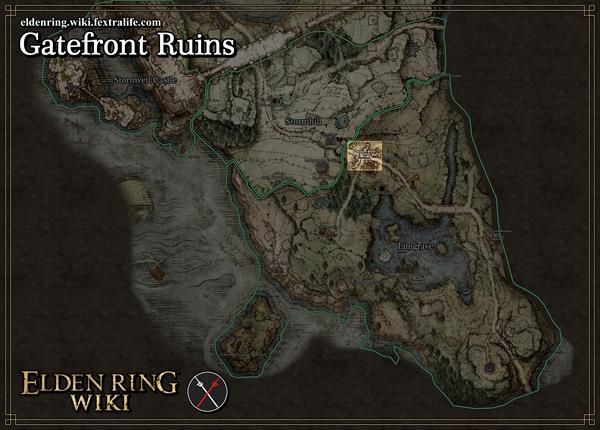 If you head north from the Church of Elleh, you can find the Gatefront Ruins, a destroyed barracks that is still used as a campsite for guards that roam the fields. You can identify if you're on the right path since there are a couple of guards roaming the outer section of the Gatefront Ruins. When you arrive, tread carefully and stay low since you are entering an enemy campsite. There are some shrubs around here to find materials such as the Rowa Fruit, Herba, as well as x1 Crimson Crystal Tear that can be found in a small room in the middle section of the area. You can use this area to practice using stealth kills since some of the the guards here are just standing and guarding a certain spot, while the others are patrolling.

By the site's campfire, you can find a normal guard roaming, while the elite guard that wears a cape and a distinct helmet is also roaming around. It is highly recommended that you thin out the numbers first and kill all of the guards you can find here so that you can fight the Elite Guard 1 on 1 since chances are if you aggro the Elite Guard, the rest of his men will be alerted and will join in fighting you. You'll also notice that one of the guards that is roaming is holding a horn, make sure to kill this enemy first since if you are seen or fail at trying to kill him with a sneak attack, he will blow the horn and alert all enemies around the site.

Apart from the guards, there are also wolves here that will alert the rest of the enemies and attack you if you are seen. If ever you are caught in a situation that you are fighting against two or more of them, if you have any ranged attacks, such as casting spells or using magic, do it, and take out the guards first and then fight the Elite Guard when he is alone. The Elite Guard wields a large shield and a spear, he mostly attacks by charging in and using his spear at mid-range to try and poke you. If he catches you or you're hit, he follows up with a flurry of swings, that can just kill you. What you can do if the enemies get aggravated, you can sprint out of the area and run further away from the ruins section, they won't chase you beyond the area and after a couple of minutes, they will go back to their routine of patrolling.

If you've killed all of the enemies or just snuck your way through, by the center section of the ruins, there is a pillar where you can find the Map (Limgrave, West), a map fragment that automatically reveals more parts of the world map once you pick it up. There is also a large stagecoach near the ruins which is protected by a normal enemy guard. You can sneak up behind the guard and kill it and then you'll find a chest on the stagecoach. Open it to find items such as the Raya Lucarian Robe, x1 Sorcerer Manchettes, x1 Sorcerer Leggings, and x1 Karolos Mask. Go back to the location, at the center part of the Gatefront Ruins, there's a set of stairs that goes underground, open the door at the end of the steps to find a chest on the other side. You'll find the Ash of War: Repeating Thrust inside it.