Online multiplayer is disabled in this dungeon.

Auriza Side Tomb Location: See it on the Elden Ring Map here. 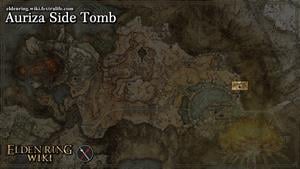 All NPCs and Merchants in Auriza Side Tomb

All Items in Elden Ring's Auriza Side Tomb

Auriza Side Tomb's gimmick is its teleporting chests sending you between inaccessible areas. Furthermore, these catacombs contain two copies of the same set of rooms, arranged only in slightly different configurations.

From the grace, the first room has a couple of small jars and a window to the left. 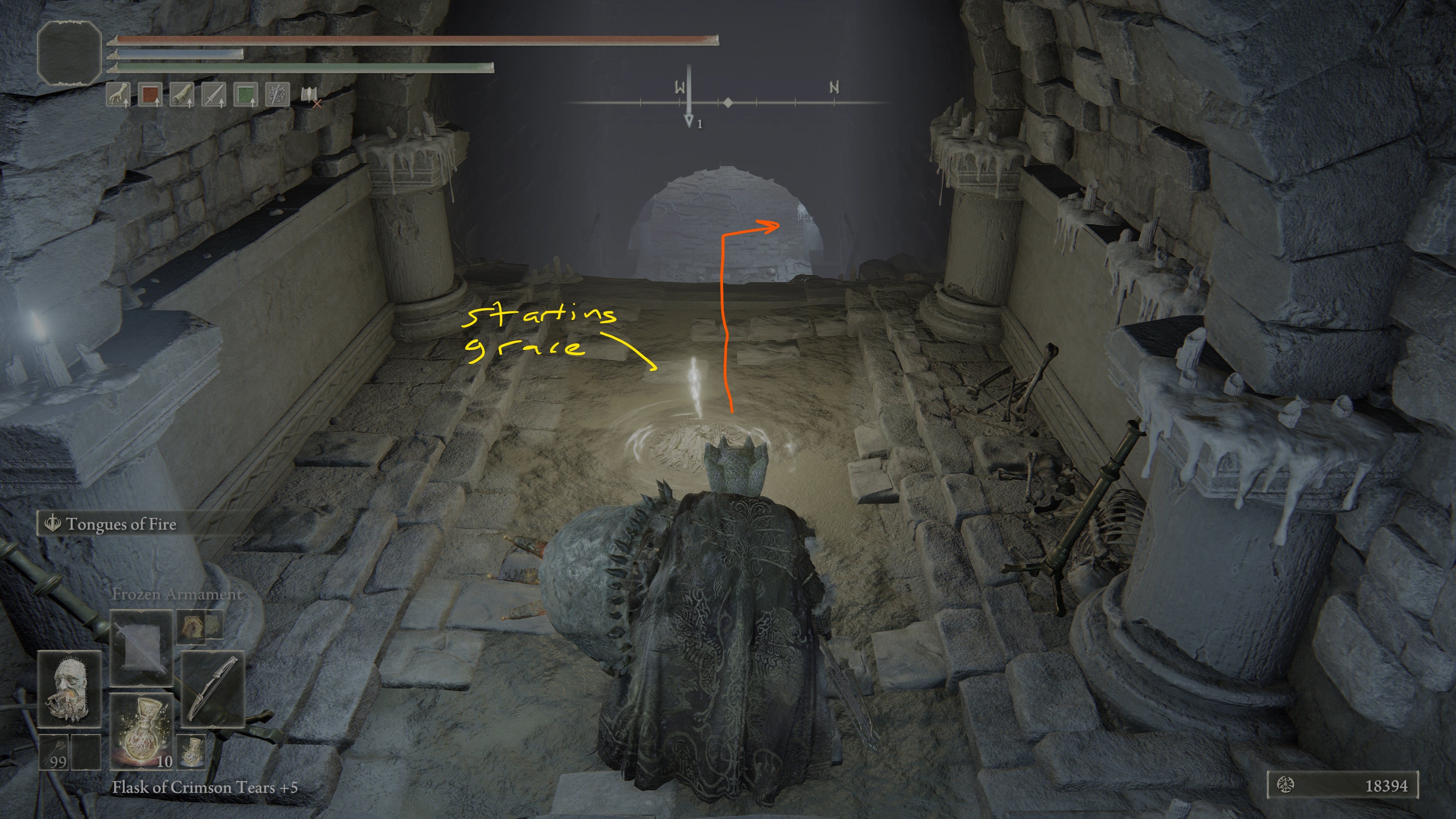 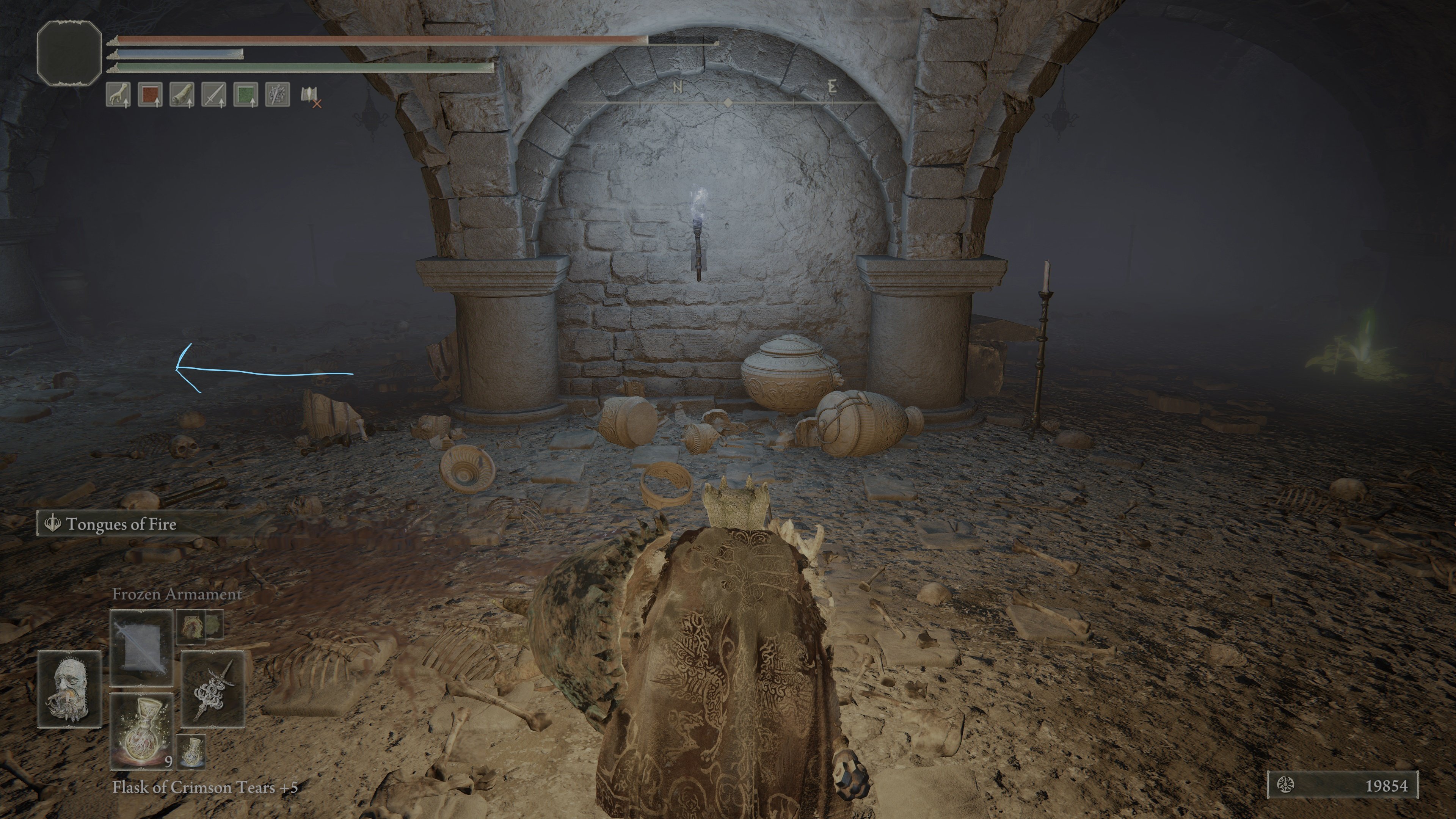 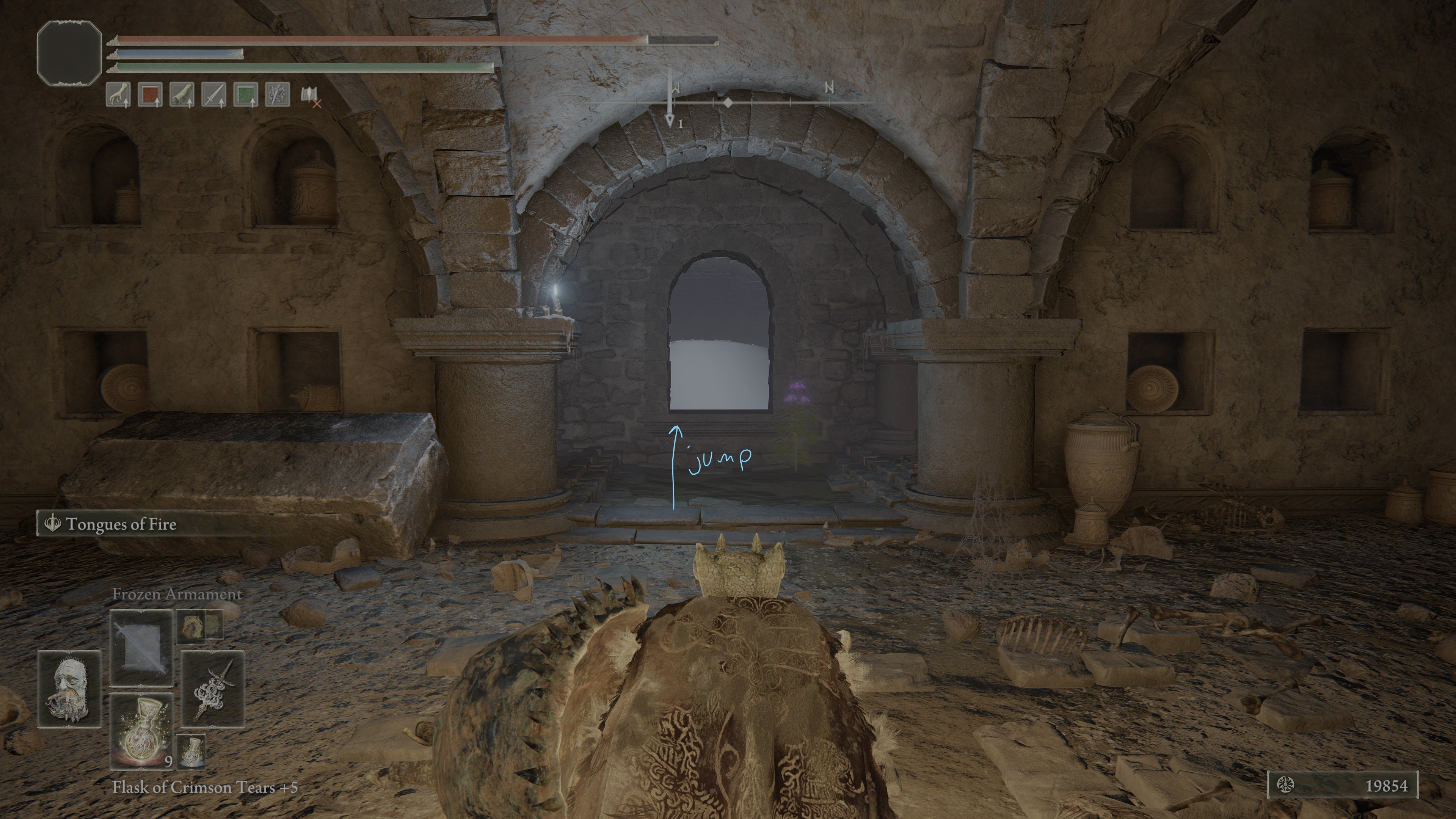 Jump through that window.  Head down the stairs there are 3 Fanged Imps. Take care of them and go into the next room with water, and then into a cathedral. 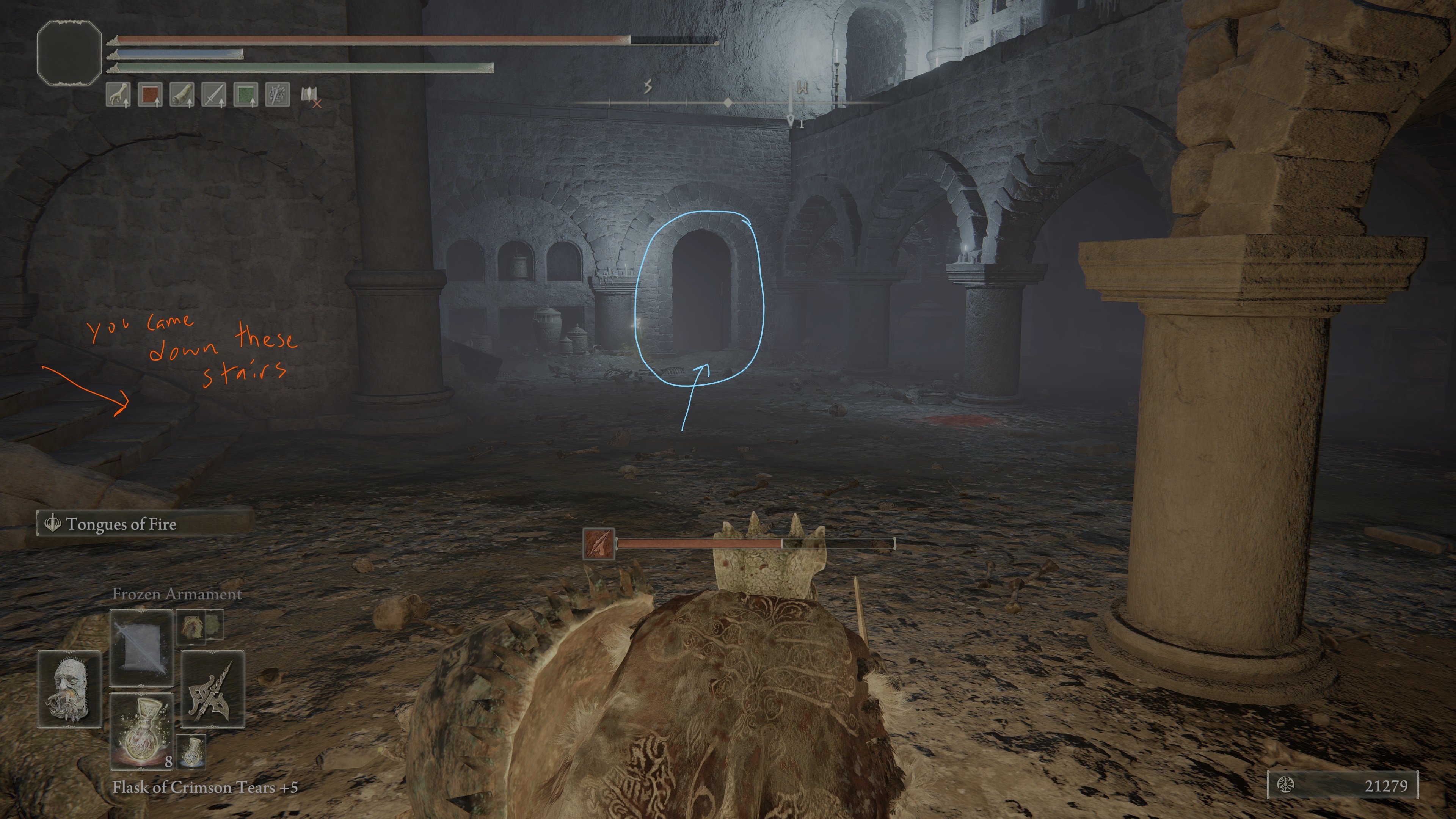 Watch for an imp above you as well as the one on the floor. You will see a chest a ways out in front of you where an altar might be, an alcove to your left and an elevated walkway to your right. The door to the room with the chest in it is locked, but proceed through the walkway. 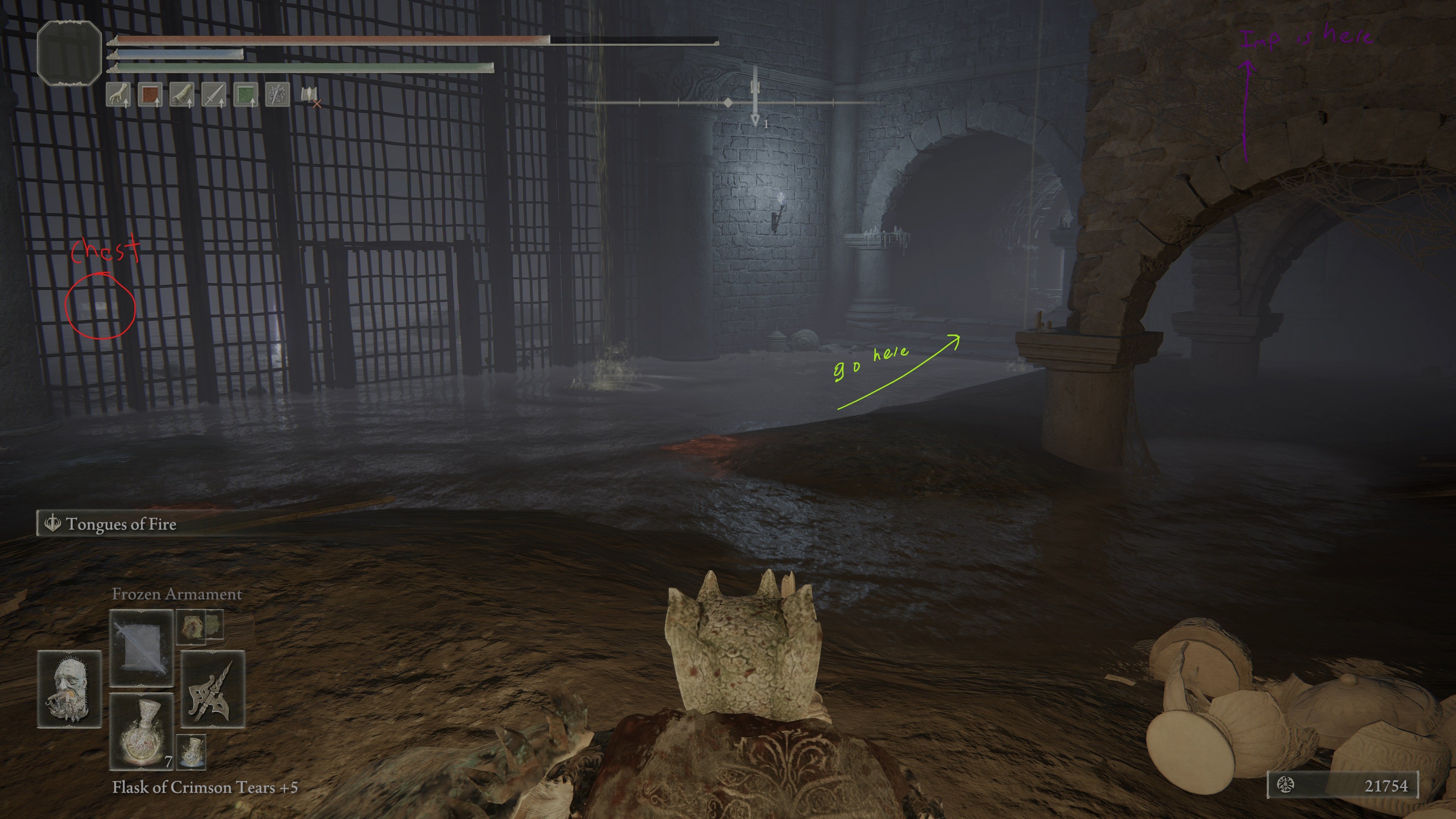 Go forward to the chest in front of you, looking out for the Imp to your left. Open that chest, it is a transporter trap that takes you to a room with 2 large jars, the Perfumer's Cookbook (3), and 2 Cracked Pots. 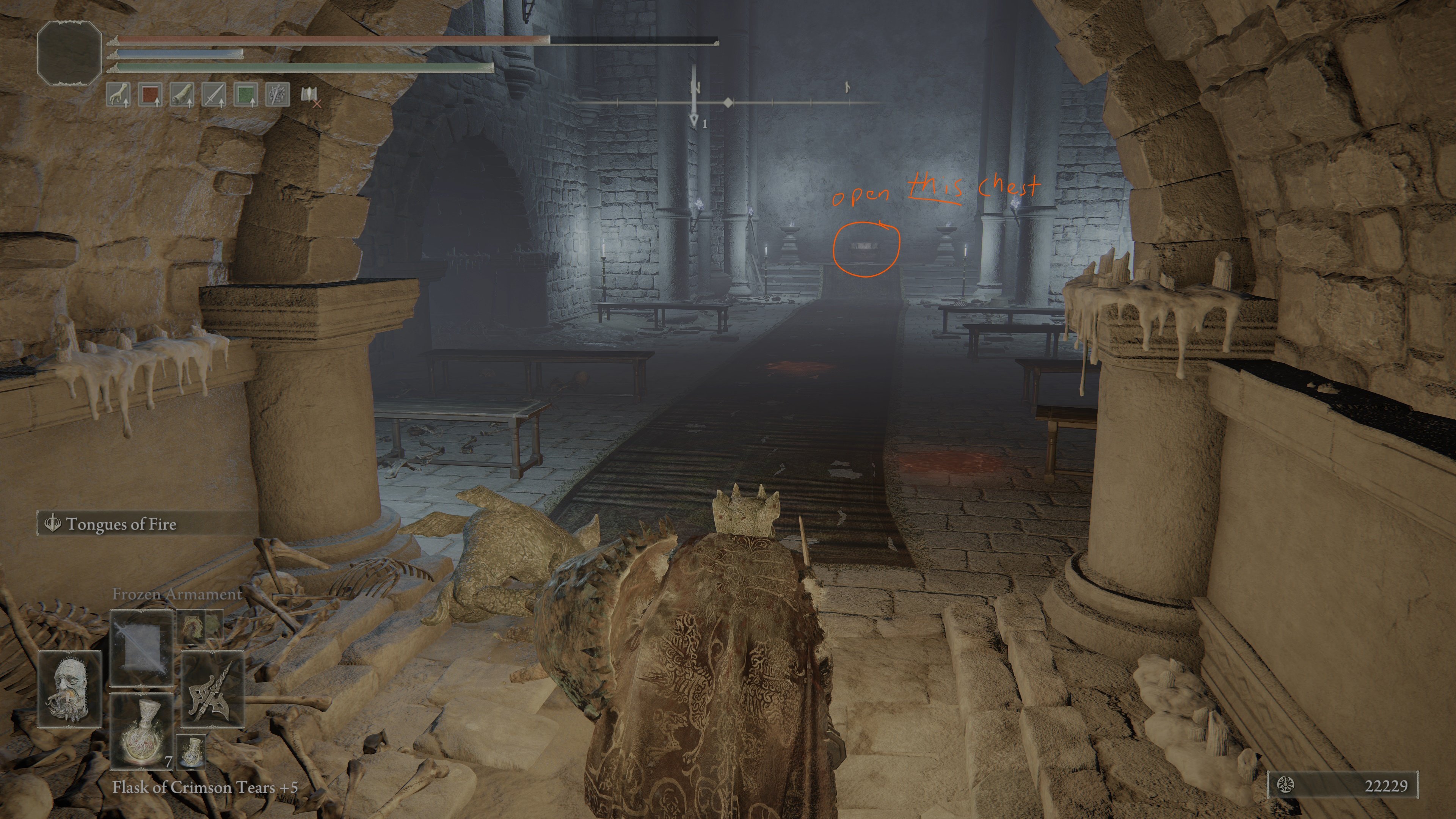 The only way back is via the same chest you came in from, so this is a dead end. 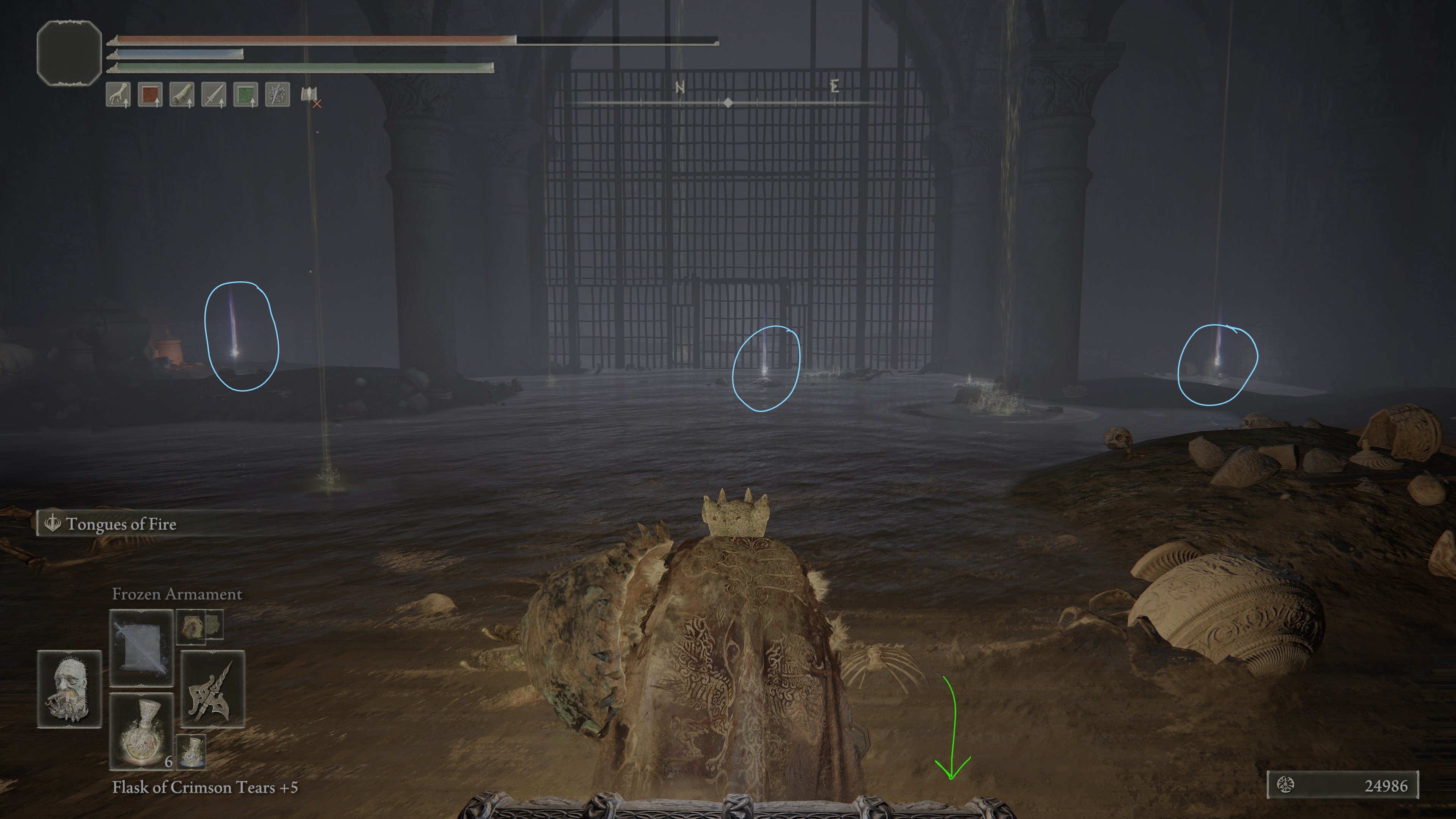 Go back, and in the cathedral room you just vacated, there is an alcove on the left as you enter the room with a hidden wall with a chest. 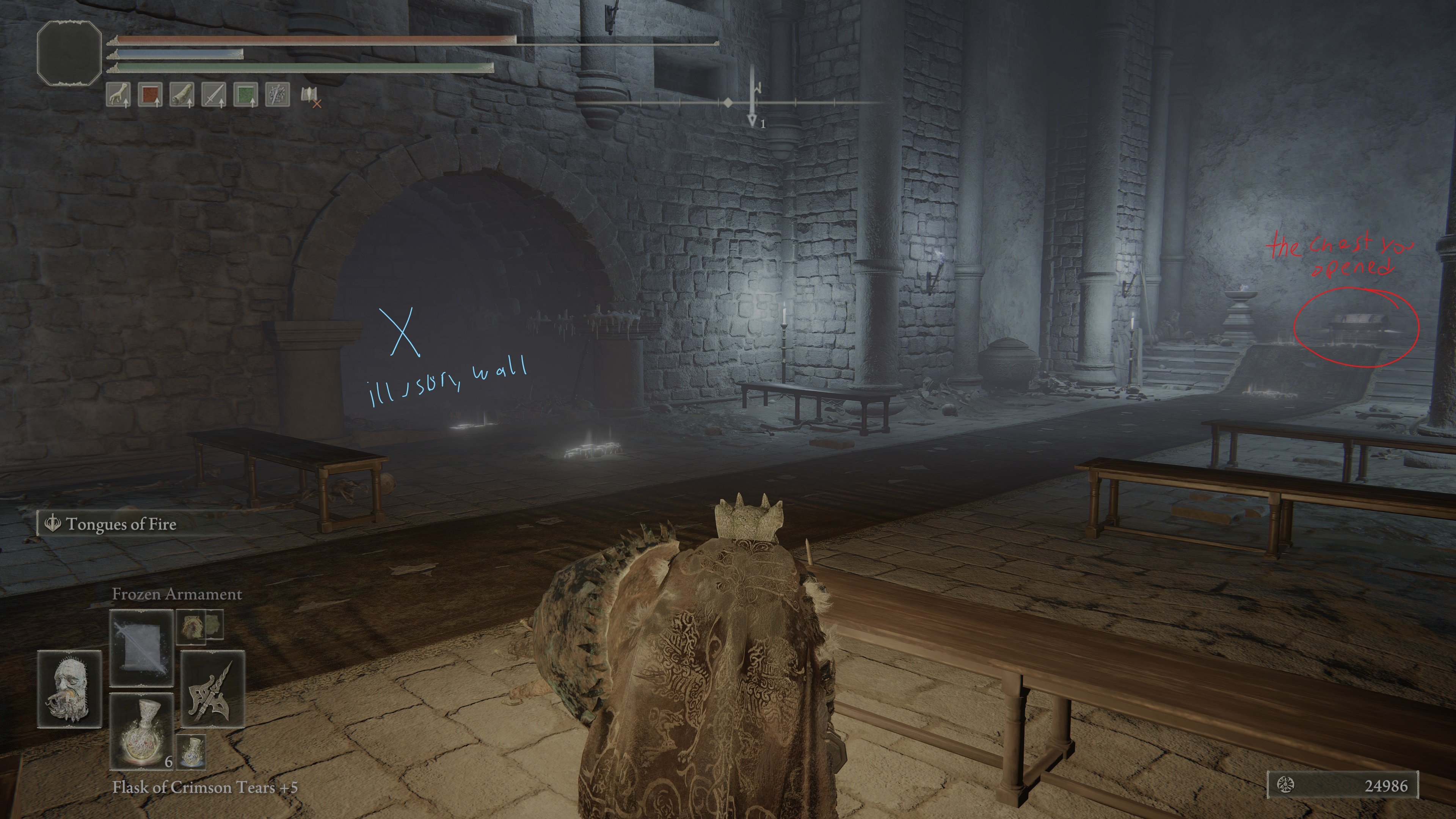 There is a glovewort in the hallway of this chest, which can help you keep track of which room you are actually in, since the other version of this room does not have it..

There are also two exploding jars in this room. Open that chest and it ports you up on a walkway with 2 Imps. This area looks the same but it is not. 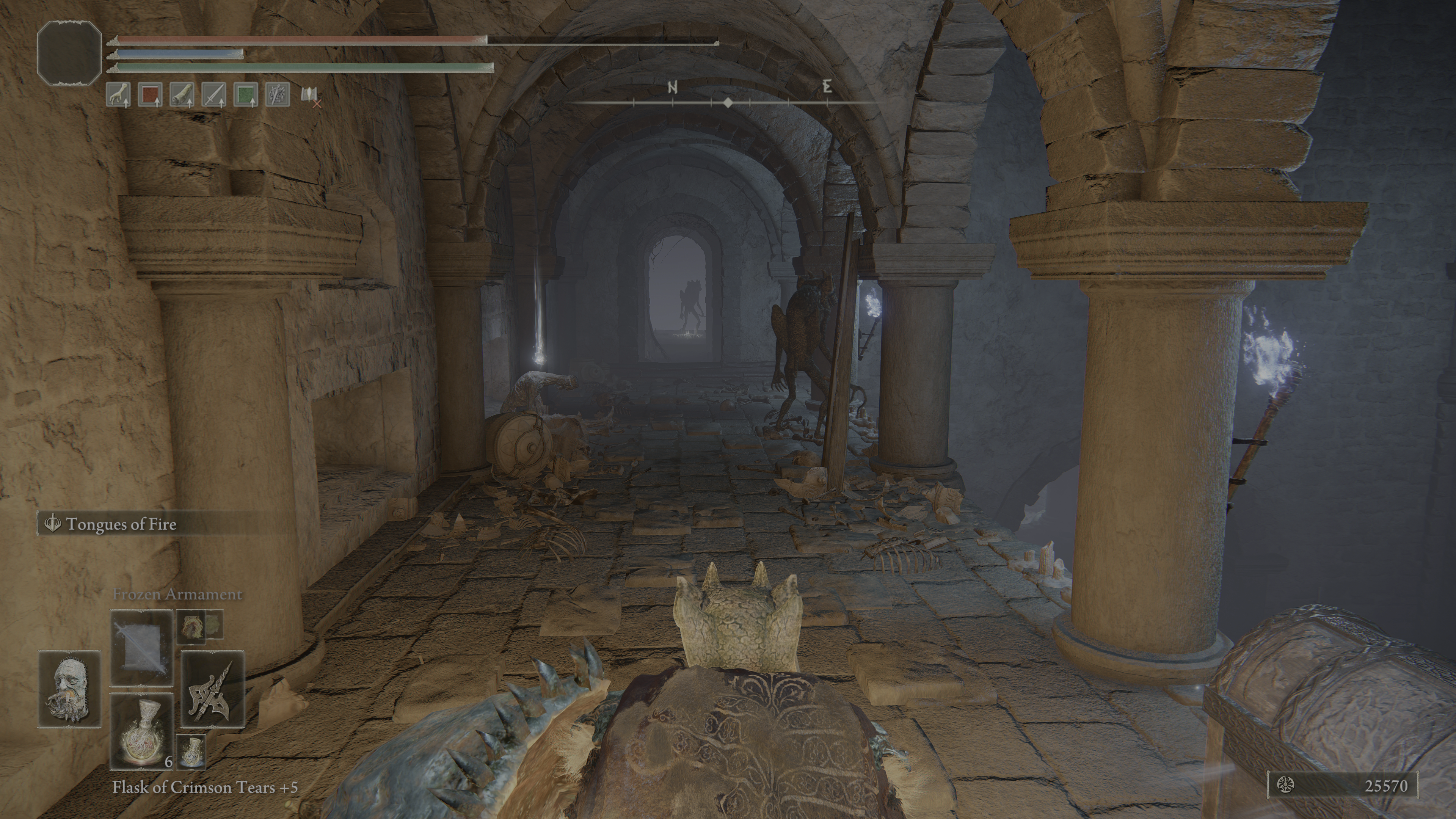 Drop down and proceed backwards like you are going back to the starting grace, going through the water room and up the stairs. When you go up the stairs at the end you will see a large jar and in front of him is a Ritual Pot.

After looting, backtrace your steps, through the water and back into the cathedral and take the alcove to your left again. Opening this chest takes you again up on a walkway, but this time staying up on the walkway and to your left you will find a ladder. 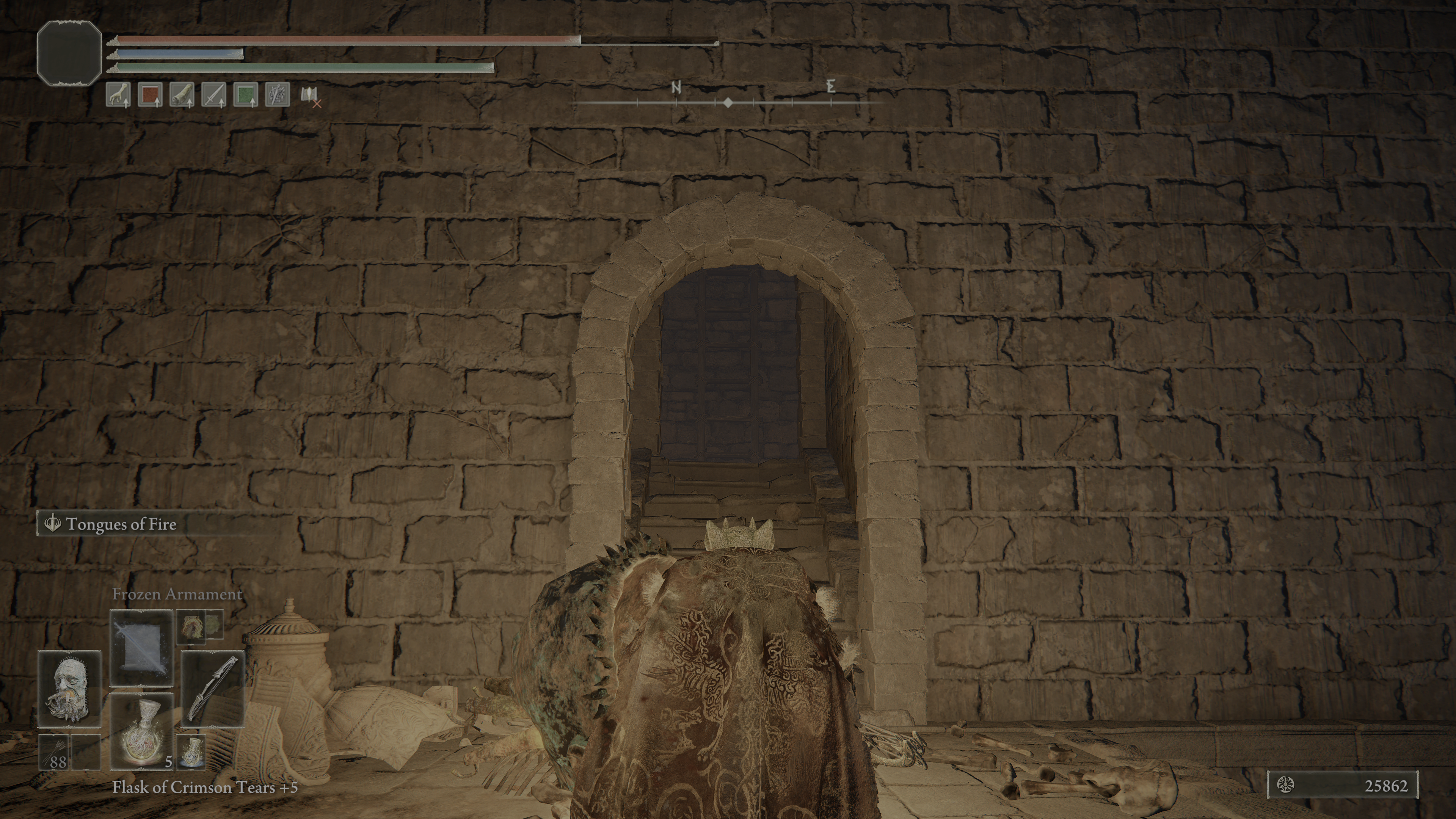 Following the ladder up, you'll reach a prayer room -- there'll be a chest, and a coffin on both the left and right wall, with a small statue flanked by two blue lanterns in front. As anticipated by now, the chest is another trap. 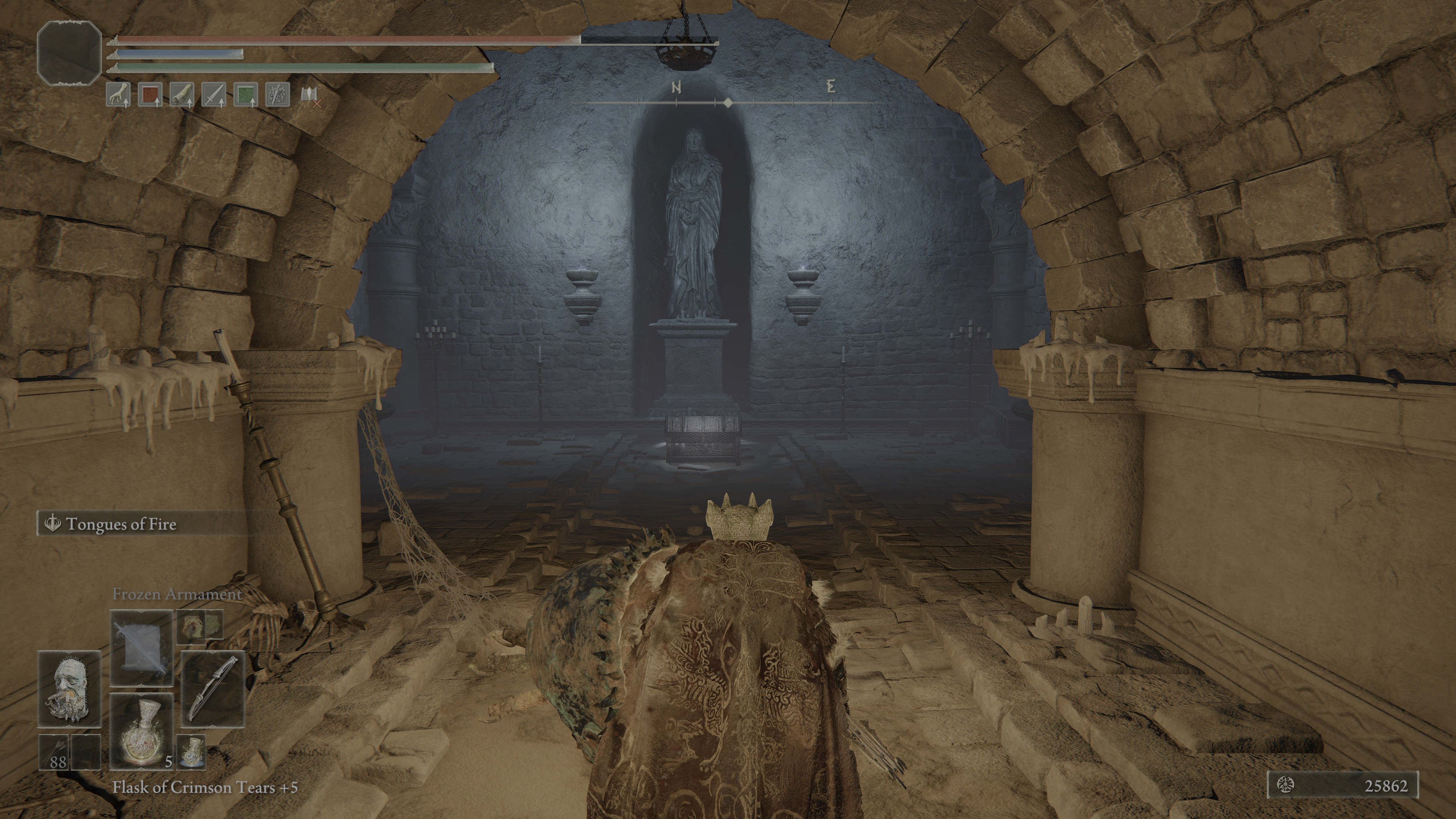 Enter it, and you'll be transported to what looks like the area shortly after the starting site of grace. 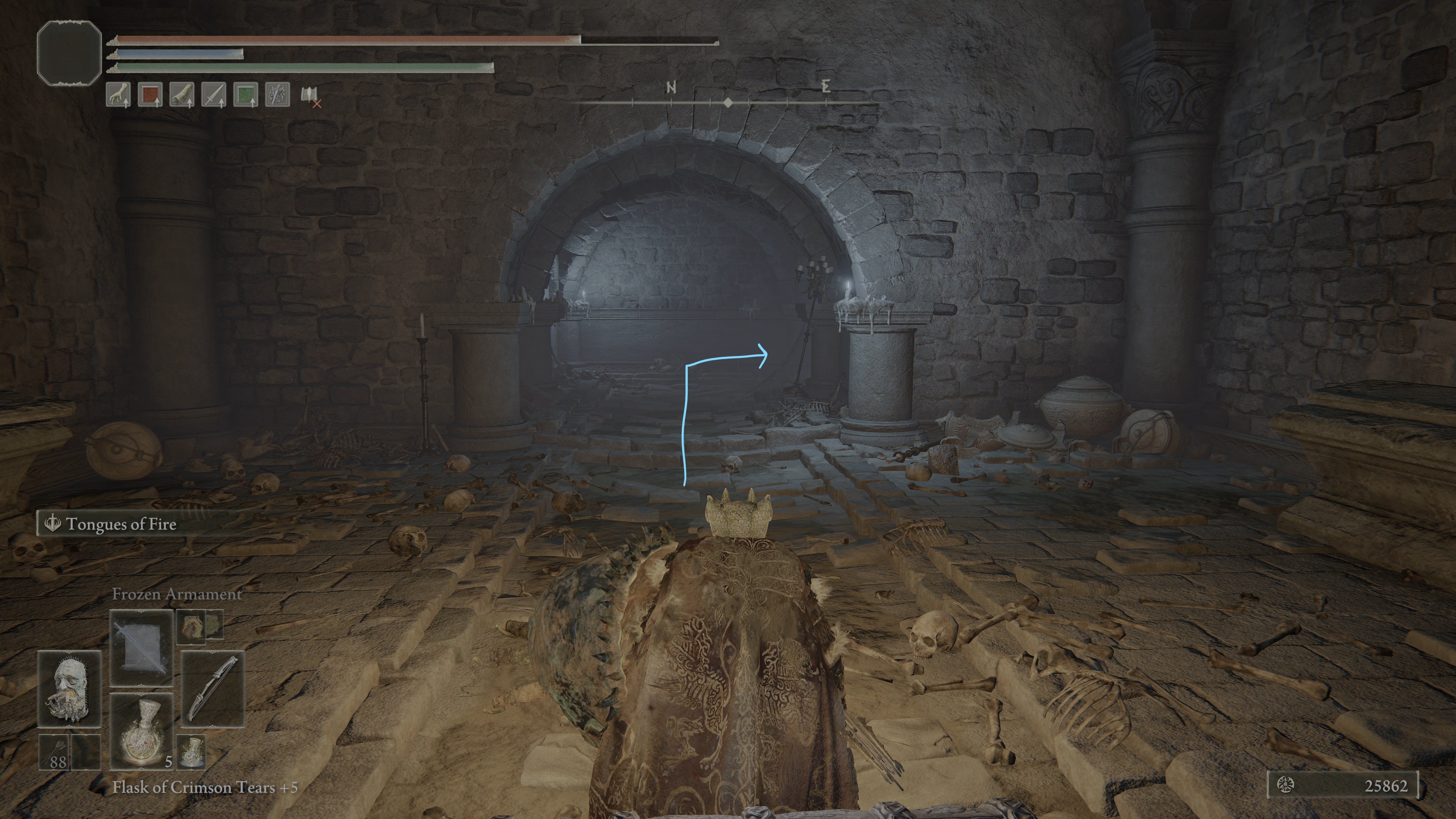 Go straight, then turn right, and proceed up the stairs (whereas in the starting area you descended) to the large room with cubic arches, they'll be a small wall (formed between two pillars) with a lantern on it in front of you. Go right around the wall, and then up the stairs. Once you reach the stairs' threshold, you'll be able to see loot a few feet in front of you.  There will be a Ritual Jar to your left, so watch for the ambush. 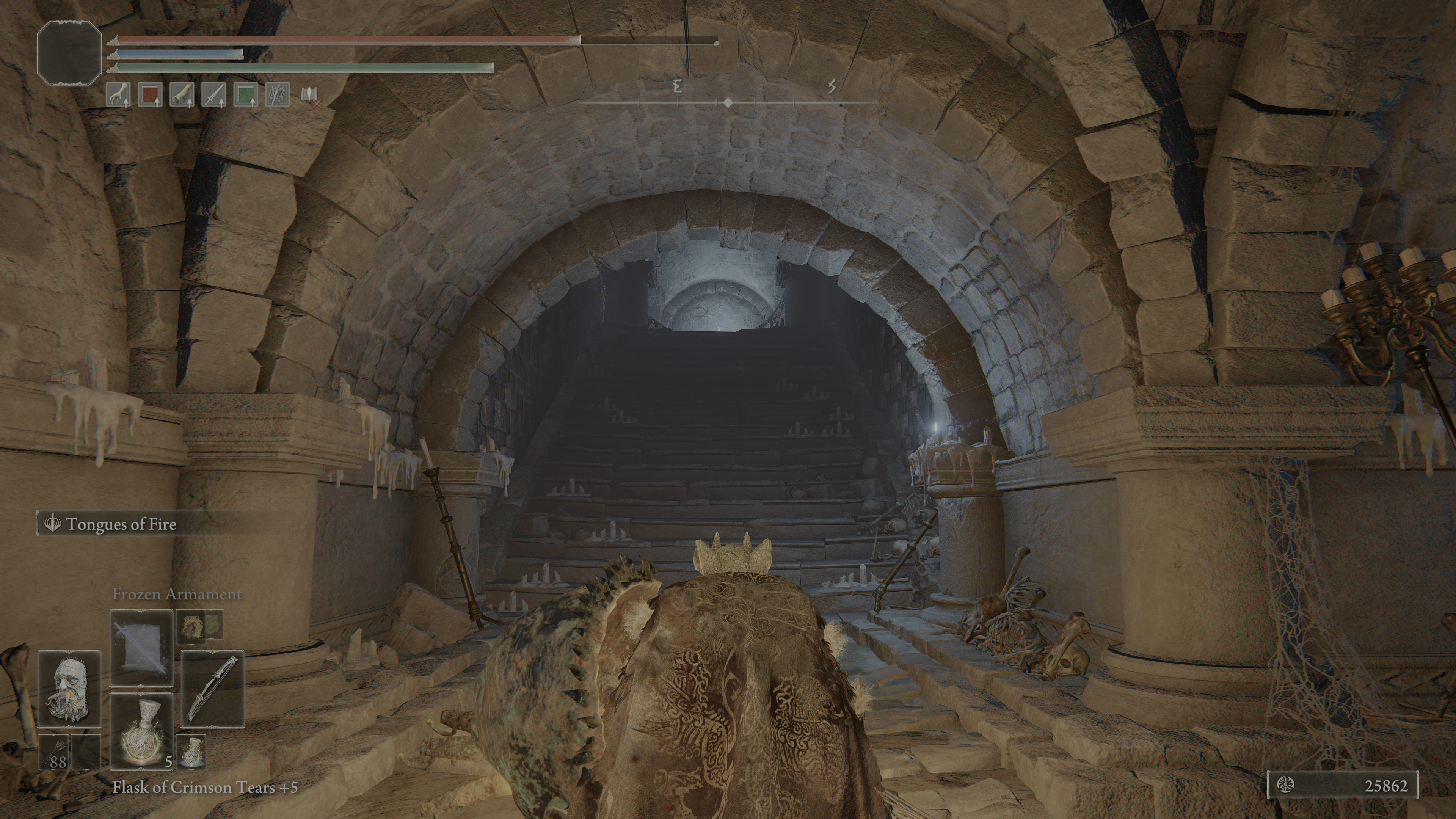 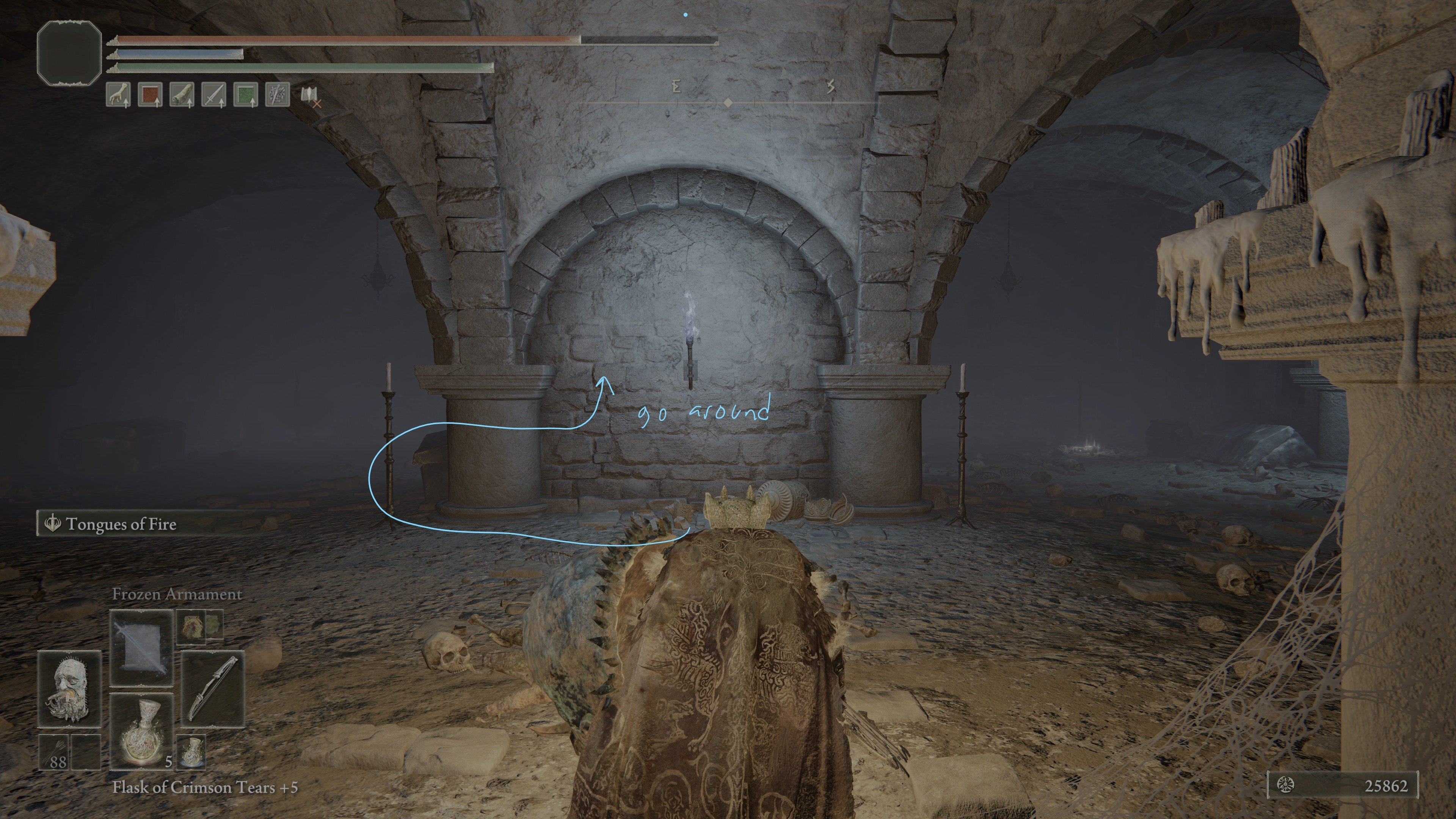 As you exit the room (coming down the stairs), to your left will be a window -- just like before, jump out of it, then head all the way back to the cathedral room and use the chest in front of the room.

This will take you to a water room with 2 small living jars, 2 Cracked Pots and a ladder in the right side of the room. 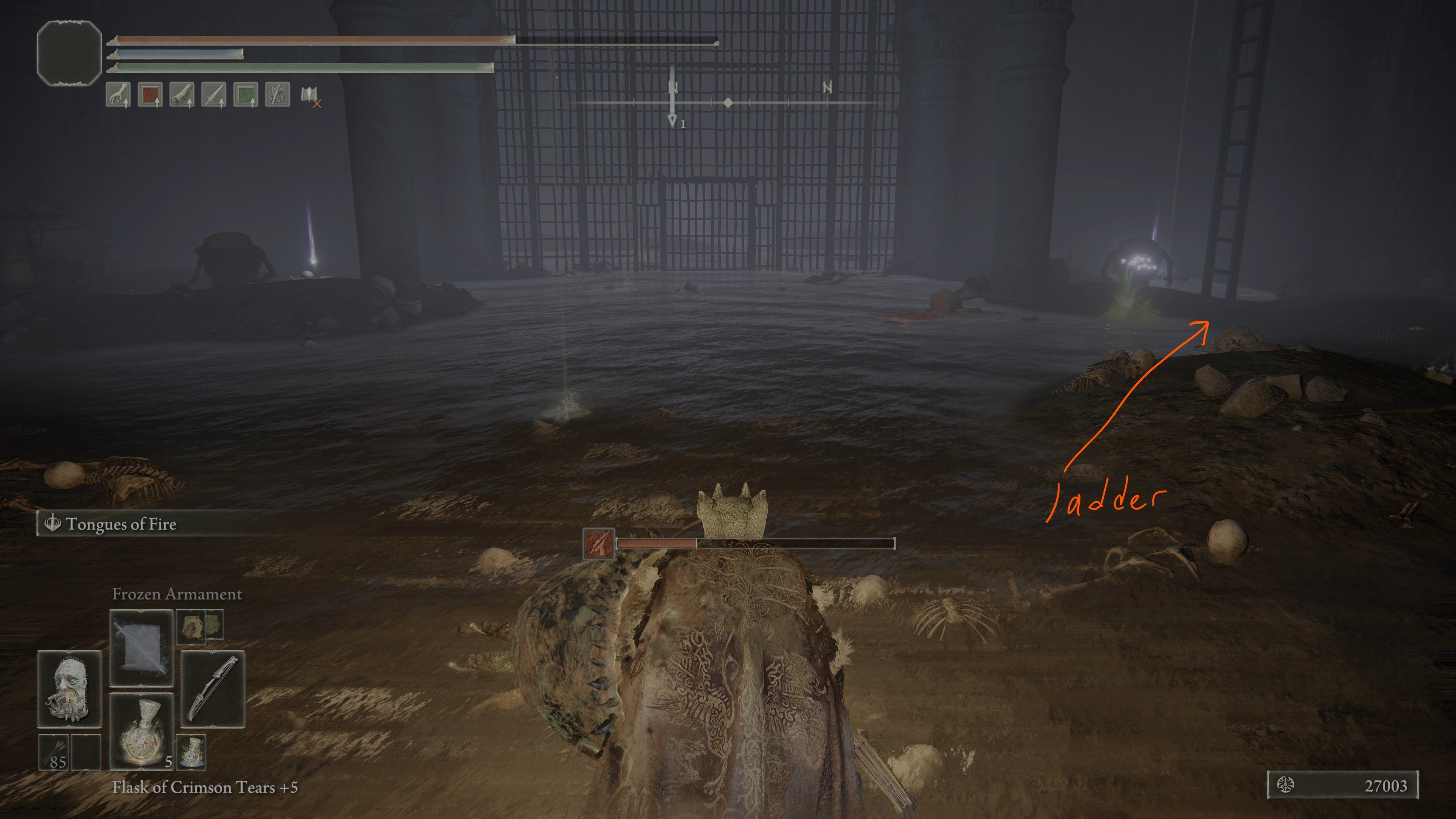 Climb the ladder, then proceed forward -- on your left will be a statue with a lever in front of it; this opens the boss gate. 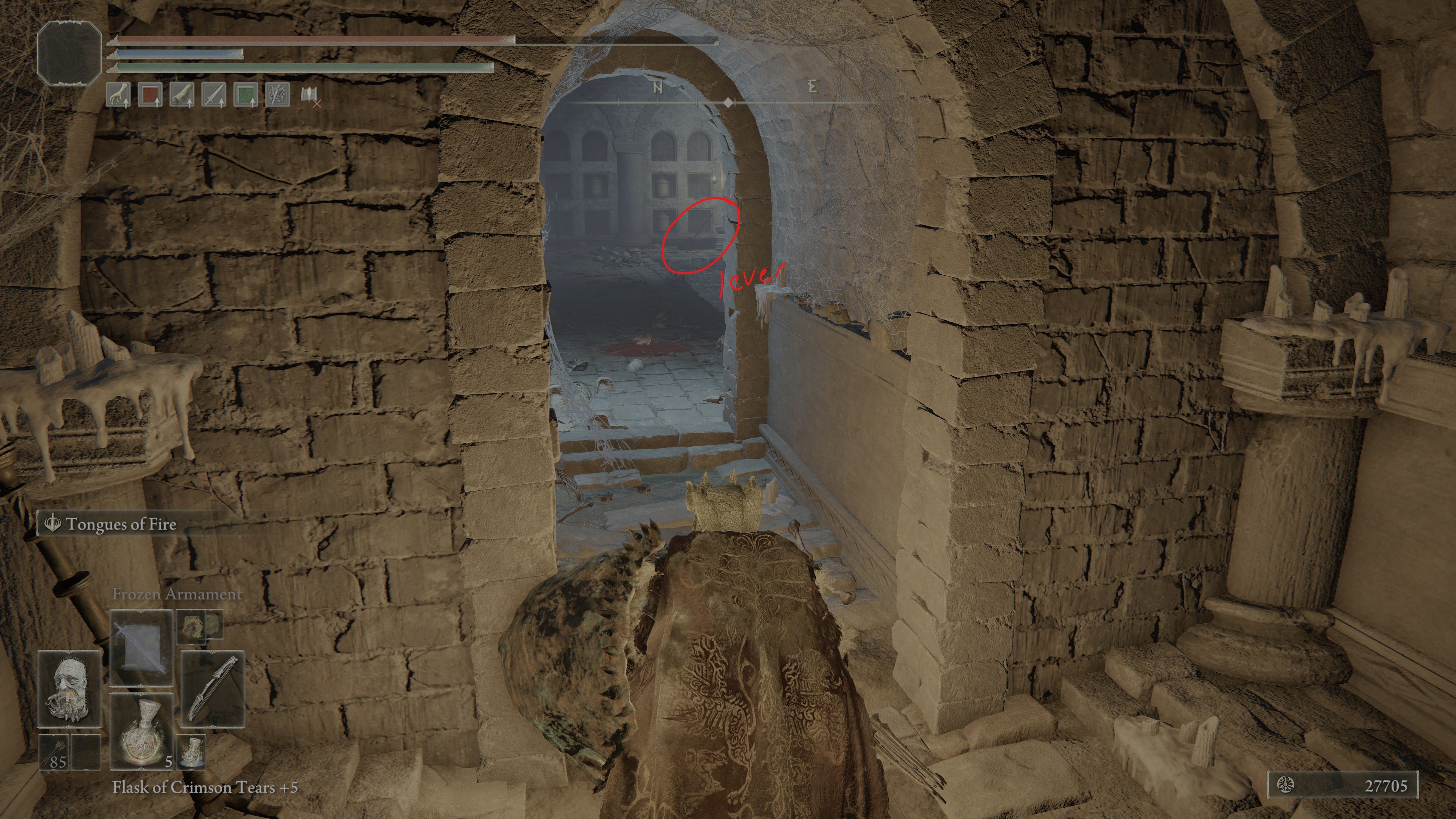 With the boss gate open, jump off the platform, and run back up the stairs to the chest (do NOT go down into the water room's chest).

When you exit the chest, you'll be in the stage similar the starting configuration, where you can go forward, then turn right, and then you'll see the cubic arches with the wall in front of you.Going straight (around the wall), and up the stairs will lead you to the entrance to the boss gate. 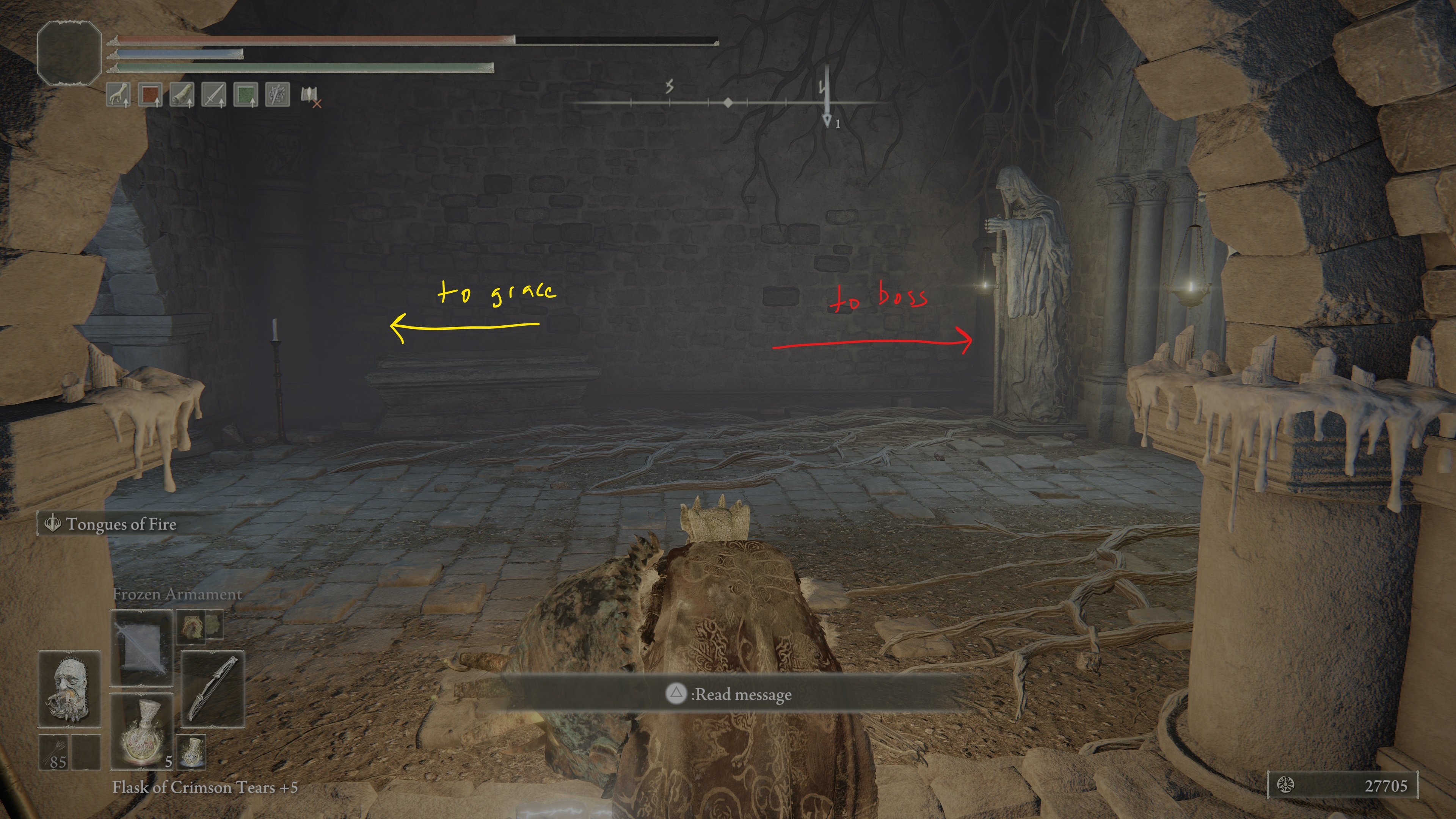 There are also Ghost Gloveworts  throughout the dungeon.

The boss of this Dungeon, Grave Warden Duelist, also has a few living jars in his arena that will attack you. Kill him to acquire the Soldjars of Fortune ashes. 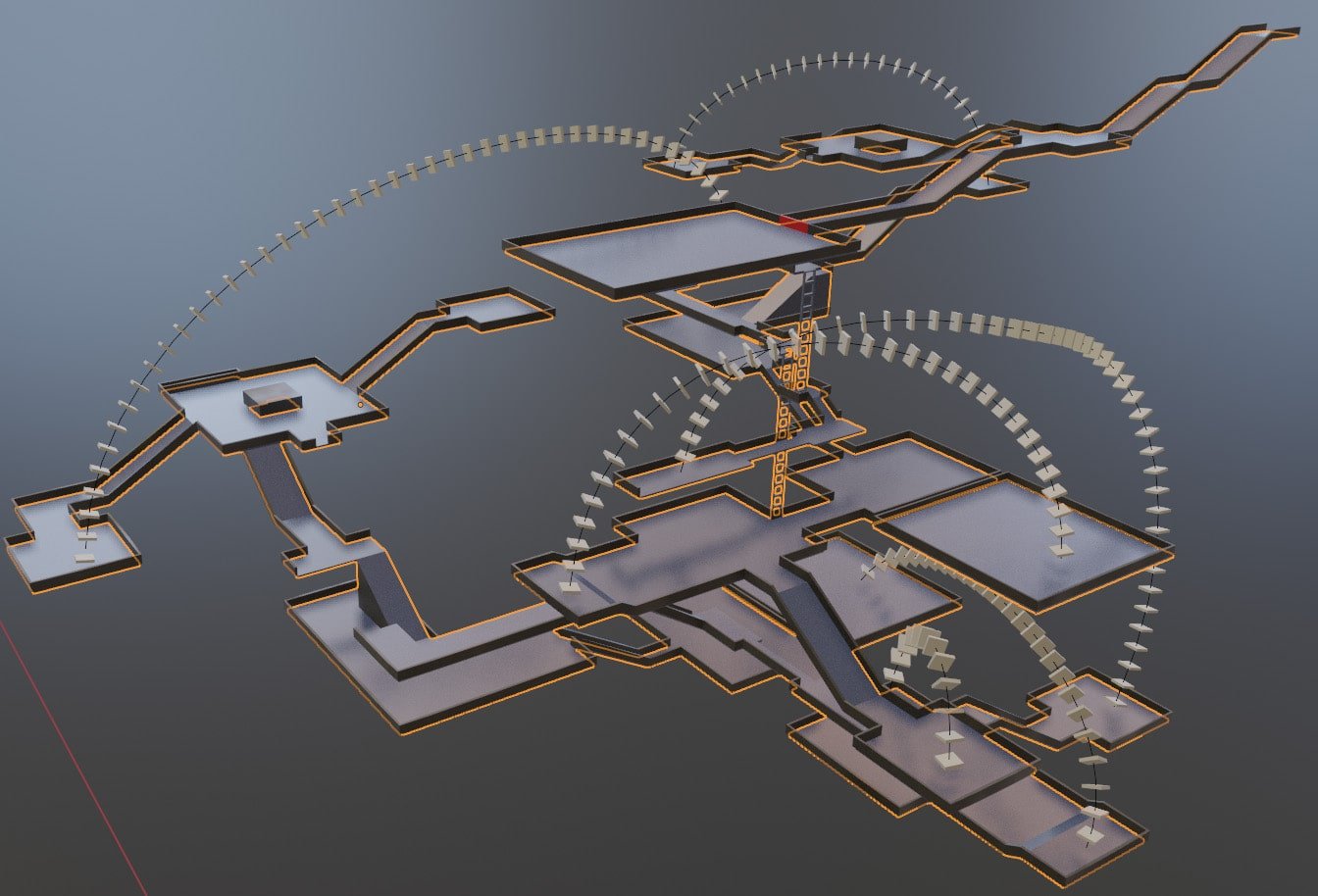 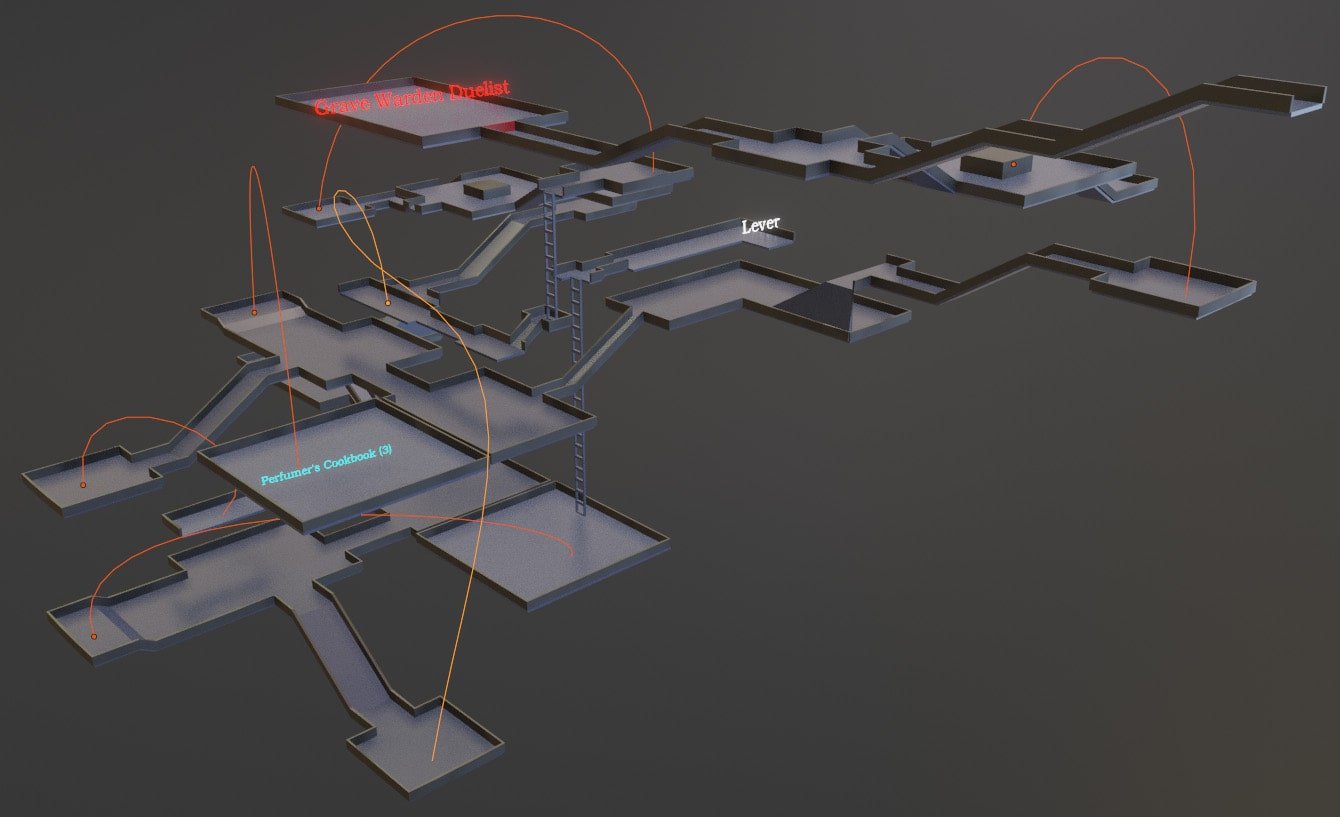