Caelid Catacombs is found due East from the Cathedral of Dragon Communion in Caelid. See it on the Elden Ring Map. 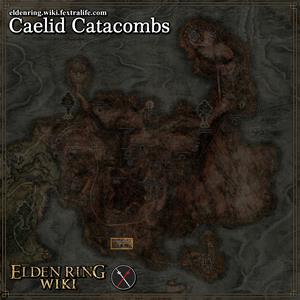 All NPCs and Merchants in Caelid Catacombs

The catacombs are very straightforward, without any forks. All you'll need is some way to deal with Scarlet Rot and perhaps some fire or frostbite damage to deal with the Rotten Giant Miranda Sprout.

Two secret areas hidden by walls to be on the lookout for:

Heading down the stairs away from the Shrine of Grace, follow the hallway right into a small room covered in Scarlet Rot. Before you enter, be sure to grab the Grave Violet on the left of the hallway. Once you do actually enter, (3) Miranda Sprouts will spawn. Take them out while avoiding the buildup of Rot on yourself. Be sure NOT to roll in the sludge on the ground as it will cause the Rot-meter to continue rising, even after leaving the liquid. Sticking to the dry patches on the sides of this room will allow for easier traversal. Here to loot, there is a Grave Glovewart [4], some Root Resin, and whatever drops may come from the killed Sprouts.

Once ready, continue northeast into the hallway. Take caution when approaching the next turn left, as a Heavy Skeletal Swordsman is waiting around the corner to ambush you. Kill it and dispense with its remains before grabbing the Grave Glovewart [3] in the corner here. Head northwest down the stairs and loot the Grave Violet on the left side of the corridor. In this next room, you are faced with a bit of a conundrum. On the platform the hallway lets you out on, a Skeletal Archer will spawn, but only after you go further down the stairs to the left and enter the swampy area below. Doing this however will also trigger the Giant Miranda Sprout that is waiting for you around the corner to the right. My best advice is to watch the platform while going down the stairs until you see the Skeleton forming, then rushing back up the stairs to deal with it. With any luck, this will then cause the Sprout to come around the corner, allowing you to more safely fight it from the stairs without incurring the Scarlet Rot penalty.

As you have probably seen, there is a Grave Glovewart [3] to loot at the bottom of the stairs. Before continuing on, there is a Illusory Wall here found under the platform the Archer was standing on. Turning directly around from the looted Glovewart, keep left of the stairs on the ground floor until you come to the last section of the wall on the right. Hit it in some way to reveal its illusory nature as well as hopefully injure the Miranda Sprout hiding on the other side. Be careful as exploring this small area will cause 3 more Miranda Sprouts to spawn. Within the hidden area, you are able to find 2x Grave Glovewart [5] and the Miranda Sprout Ashes. At this point, one may want to take a small break on the stairs to allow their Scarlet Rot meter to deplete. When ready to continue, head northeast from the bottom of the stairs to the hallway, being sure to grab the Ghost Glovewart [3] and Ghost Glovewart [4] to the right of the hall's entrance.

Follow the hall northeast and loot the Grave Glovewart [4] within the sludge of the next room next to the central pillar. Keeping to the right, make your way around the central column while being sure to avoid the Scarlet Rot trap that can be triggered by stepping on the rotten debris. In the eastern corner, you can find another Grave Glovewart [4]. Going into the next hall, still heading northeast, you should see a locked door. Turn immediately around and attack the wall of the central column in the previous room that you are now facing. This should reveal a lever which you can pull to open the locked door. This door leads directly into the final boss of this mini-dungeon. The room directly preceding the now-open door contains Root Resin to pickup.

Your final boss through the fog gates is the Cemetery Shade, which can be back stabbed and when cleared gives you Kindred of Rot Ashes. This fight can be challenging as the Shade's ranged attack can paralyze you, leaving you open to its stunlock combo. Summoning of Spirit Ashes is highly encouraged, as the shade is truly only strong against one target at a time.