The northern section of the Ainsel River - Ainsel River Main and Nokstella - can be accessed by using a waygate at the top of Renna's Rise. You have to have given Ranni the Fingerslayer Blade to gain access to this waygate. You can also access it without her quest by taking the coffin in Deeproot Depths [Elden Ring Map]. 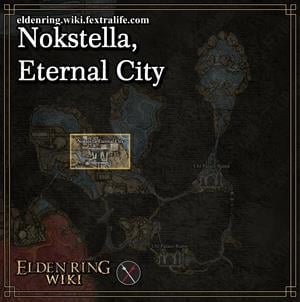 All NPCs and Merchants in Nokstella, Eternal City

From the Site of Grace, there is Magic Grease x3 in the ruins directly to the left. On the right, you will find a Nox Swordstress riding a Giant Ant, and Ghost Glovewort (7). In the ruin ahead there are two Nox Monks, a Smithing Stone (6), and Drawstring Holy Grease x2. You can go to the right around the larger building ahead to pick up Silver Tear Husk x3. Going straight ahead, there are 3 Serpent Snails guarding a Celestial Dew in an alcove to the right. Further down the path, more Serpent Snails await you, four of them drop down onto you when you loot the Smithing Stone (6). To your left are many Silver Tears, some of them will explode into lightning upon death, along with another Giant Ant-riding Nox Swordstress. There are also some tears up on a ledge to the right which will shoot at you. Try taking one of the tears out from range to trigger a chain reaction. There is a Golden Rune (10) on the right side of the river, a Ghost Glovewort (8) on either side. Consider fighting the remaining tears before picking these up, however. Some of them have shields.

Continuing on the right you will find 3 Giant Ants and a Stonesword Key. Take out the remaining Nox Swordstress riders and tears, then pick up another Ghost Glovewort (8). In the far right corner, there are two plated ants which you can simply ignore. The ruin on the left contains a Celestial Dew. Quickly go down the elevator to activate the Nokstella Waterfall Basin Site of Grace, then go back up. The remainder of this walkthrough is dedicated to picking up items, including a Golden Seed at the end. To start, go to a ruin on the left side earlier which contains a Somber Smithing Stone (7) and many tears. There is a single Golden Centipede in another room. Go further back and up the stairs to fight a Nox Swordstress guarding a chest with Ghost Glovewort (9). At this point, you can go back to the first site of grace, or spend some of the upgrade materials.

Next, head up the main stairs where a Night Maiden awaits you, along with Fan Daggers on a corpse. Turn left to fight yet another Nox Swordstress who guards a chest containing the Ant's Skull Plate. Note that the chest is not in the center but off to the right. After fighting the tears further up the stairs, head around the building on the left to find the Archer Ashes. Inside the building, more tears await you, a chest contains the Ghost-Glovewort Picker's Bell Bearing (2). Now heading right, pick up two Golden Rune (10). Go around the building on the left again and use a Stonesword Key to find two Nox Monks and a chest with the Nightmaiden & Swordstress Puppets Ashes inside.

Now, upon crossing the bridge, a giant Silver Sphere will roll at you. Try sprinting to the right next to the building ahead, the Silver Sphere will get stuck. You will see particle effects once it attacks, then you have a short window to attack for yourself. In the building, there is another Silver Sphere on the ceiling, so try to take it out with ranged attacks from outside. Each Silver Sphere drops a Larval Tear, the chest inside contains a Great Ghost Glovewort. There is a Golden Rune (10) on the bridge and another one on the stairs. Turn right past the stairs and pick up a Smithing Stone (6).

The building on the left contains another Silver Sphere that drips many different types of Silver Tears before dropping itself, and a chest with a Somber Smithing Stone (7). The Silver Sphere drops a Larval Tear upon defeat. On the stairs to the left from here is a Teardrop Scarab carrying a Somber Smithing Stone (6). The building is occupied by two Silver Tears that transform into humans, and a Nox Swordstress. It also contains a chest with the Moon of Nokstella. Leaving the chest alcove, exit to the right of the room, drop down some ledges and take the elevator down to pick up a Golden Seed. You are done now and can warp to the Nokstella Waterfall Basin Site of Grace. Select the option "Talk to Ranni" while resting there, if you want to follow her questline.

There is a Ghost Glovewort (9) to to the left of the elevator you came down with, then go through the tunnel. There are three Basilisks here, as well as a Smithing Stone (4) and (5). Defeating the Baleful Shadow here grants you the Discarded Palace Key to be used in the Raya Lucaria Grand Library. Go inside, take the elevator down and touch the Lake of Rot Shoreside Site of Grace. You are now done with Nokstella, see Lake of Rot for details on how to get through there.