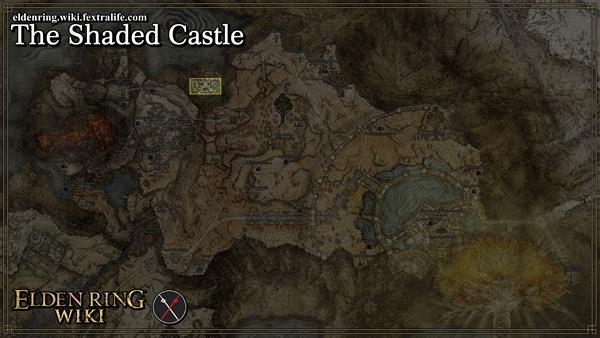 All NPCs and Merchants in The Shaded Castle

All Items in Elden Ring's The Shaded Castle

The Shaded Castle can be found in the North part of the Altus Plateau between the Mt. Gelmir and the Altus Plateau regions and can be seen while crossing the rope bridge between them near the Bridge of Iniquity Site of Grace. The castle is half-sunken into a poisonous bog with the air tinged yellow by the fumes. The castle can be reached by heading north in between the cliffs between the regions, heading east and north from the Old Altus Tunnel Site of Grace is a good way to get there. The Second Church of Marika is close to this area, though a safe way down to the valley from there may be difficult to find and navigate.

To enter the Castle players can use their steed to jump over low parts of the wall to get on top of the walls. One way in can be found following the wall to the northwest and climbing the rocks into the wall. Another way in can be found on the northeast side, keep close to the wall when the ground raises to find a low wall that can be jumped into. The northeast entrance is recommended as this entrance is close to the Shaded Castle Ramparts Sites of Grace, follow the wall southwards to find this Site of Grace.

Along the top and within the castle walls players will find Putrid Corpses as well as some Depraved Perfumers. A variation of Depraved Perfumers using a shield and throwing fire can also be found on the walls. Many Slugs can be found on the ground but also latch on the walls of the castle. 2 Boss enemies from other areas appear in The Shaded Castle as regular enemies, Revenants show up in 2 different places on the castle grounds while Lesser Cleanrot Knights can be found in a few different areas atop the walls and within the castle.

From the Shaded Castle Ramparts Site of Grace, there is a ladder that leads into the castle area. A large amount of the castle grounds are covered in poison, walk carefully between safe or raised areas to not accumulate poison status while exploring or fighting in this area of The Shaded Castle. Using ranged attacks and abilities can be very effective in this part of the castle as you stand in safe places or use the height and range advantage of being on the walls to easily deal with the enemies. Within the walls of the castle, there are a few large dead trees that can be seen from far away, powerful enemies can be found under them but also many bodies with treasures found on them. A Royal Revenant can be found under the black tree in the northwest around bodies that hold a Ghost Glovewort (4) and a Somber Smithing Stone (5). You can find a Smithing Stone (5) and Drawstring Fire Grease under the tree in the south of the castle.

There are also many rocks that jut out from the ground creating small pockets within the castle grounds where enemies and treasure lie. Within the east side of the outer wall, north from the Shaded Castle Ramparts site of grace, is a small area with the south side walled by rocks. Walking down the stone pillar into the area players will be able to see the "Champion's Song" Painting on the right within a wooden structure, to get to the painting there are a set of stairs at the bottom that players can walk up. Following the outers walls of the castle in the northwest area, there is an area where one can find a Giant Miranda Sprout along with many Putrid Corpses, a Smithing Stone (5) can be found in the corner behind it.

To get further into the castle, there is a ladder leading up to the inner west wall, going over this wall will bring you into the next area of the castle and give you access to the next Site of Grace as well as the ladders up to the main castle areas. Going along the top of this wall, heading to the west, you will find a Lesser Cleanrot Knight at the end defending the entrance to a small room there. Defeat them to get to the chest that has the Valkyrie's Prosthesis within. Going east along the wall you will find Putrid Corpses and one particularly large one on the wooden bridge.

From the inner west wall, you can climb over the roofs of the broken buildings to get across the gap and reach the Shaded Castle Inner Gate Site of Grace. Alternatively, you can go up the stairs in the middle of this courtyard area then head left to the Site of grace all the same. The inner east wall can be reached by a ladder that leads up from the inner part of the wall on the east side of the courtyard. At the top of this wall are some enemies but also the Perfume Bottle and a Smithing Stone (5) for players to loot. Taking a few steps back on the wall, you can kick a ladder that leads to the outer courtyard. On its left, you see a set of stone pillars, leading to a corpse (that you saw on a stone pillar in the outer courtyard but couldn't reach) bearing a Stonesword key.

Teleport back to the Shaded Castle Inner Gate Site of Grace. In the middle part of the courtyard up the stairs is a small garden area where a Royal Revenant will spawn and attack the player, also in this garden is a Rot Grease on a body.

Heading up into the castle you will start seeing Rotten Strays and other humanoid enemies within the buildings. Be careful of the small spaces in the buildings and walkways and of being swarmed by multiple enemies. The rooms here have many statues and bookshelves, with enemies hiding behind some of them, the rooms do not have great lighting so a torch is a good idea. Within the first room after going up the ladder there is a Wandering Noble wielding a sword waiting on the side of the entrance ready to jump you. Inside this first room are a ladder with a ranged enemy next to it and a Page hiding behind the statues. Taking the ladder up will bring you to an open area with no enemies, the Perfumer's Cookbook (2) can be found here on the body sat on the chair.

Leaving the room leads to an open walkway with a bridge that reaches to the other side and the next tower up. On the right is a Rotten Stray chewing on a body, loot the body for a Hefty Beast Bone. A Lesser Cleanrot Knight can be found on the bridge blocking the way, once across the bridge the next room has many statues but also 2 Page enemies, one behind the statues and one up the stairs. 2 Gold Fireflies can be found on a body at the back of the room.

Going up the stairs leads to the upper courtyard area of the castle, this is the last area with enemies before the boss and also where a ladder can be found that when kicked down will help create a shortcut from the Inner Gate Sites of Grace. Another Lesser Cleanrot Knight can be found defending the central tower, there are also two rotten strays in this area, one larger than the other; be careful with being surrounded by them. Once this area is clear, head to the opposite side of the courtyard from the entrance to find a lit brazier near the edge with a ladder to kick down. There is also a tower with two Aeonian Butterflies on a tower that can only be reached by jumping onto the south wall and walking to the southeast corner, then jumping to the tower.

Once you make it back to the area you just jumped from, the central tower holds an elevator for players to go up, across the bridge at the top is the boss fight for this area.

BOSS BATTLE: ELEMER OF THE BRIAR

Elemer of the Briar is a humanoid boss that primarily uses one large sword to fight the player that deals a large amount of damage with their attacks. The large greatsword it uses and the shield on its back are both dropped when the boss is defeated. While this boss is a melee fighter, the sword that the boss uses can be thrown and used at a range, the boss can even continue attacking at range before retrieving its sword. Watch out for when its arm or weapon glows red to dodge out of the way of its attacks.

After beating the boss, in the hall where it was defeated, the Castellan's Hall Site of Grace appears and becomes available to use and he drops the Marais Executioner's Sword along with the Briar Greatshield. 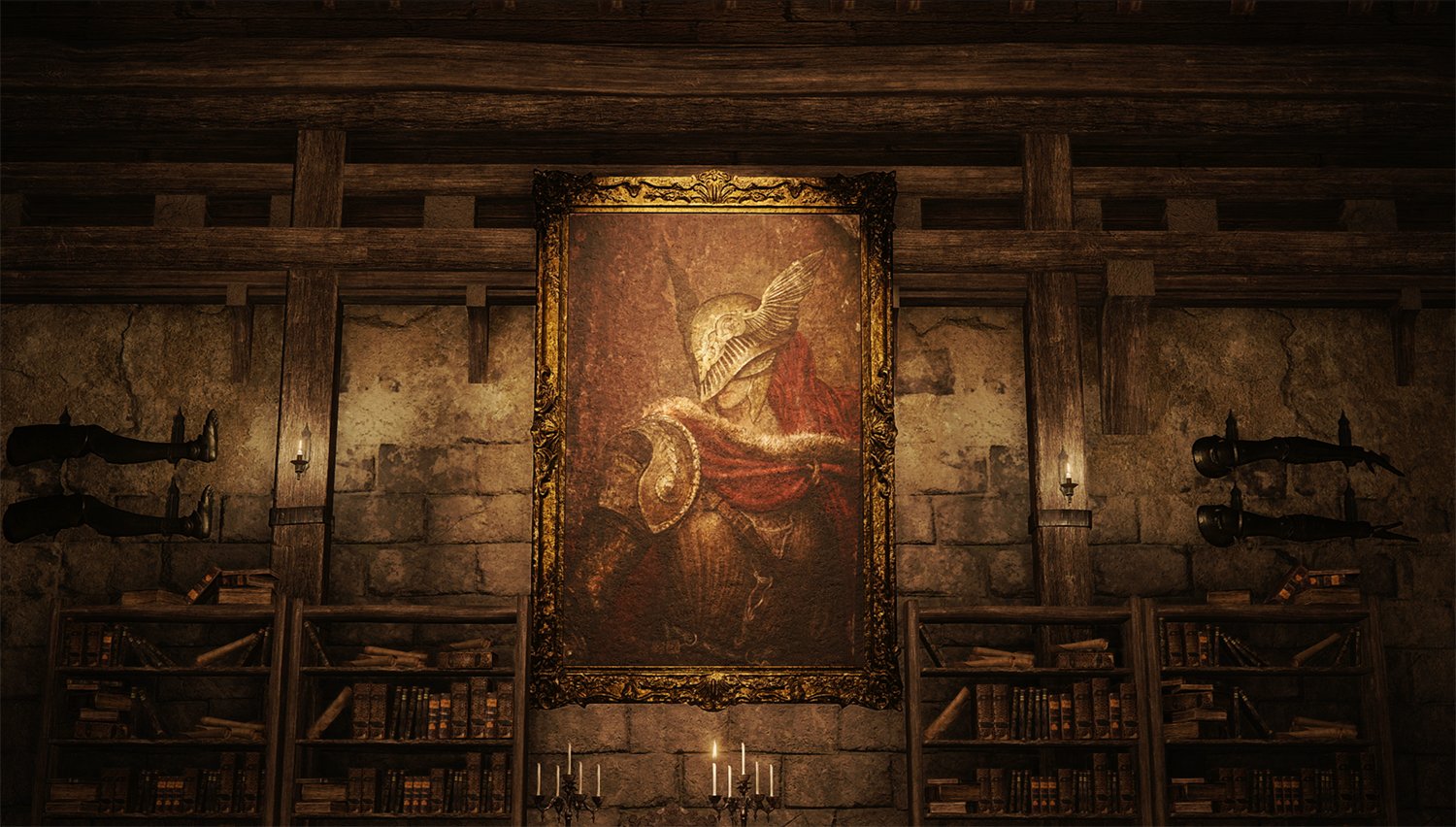 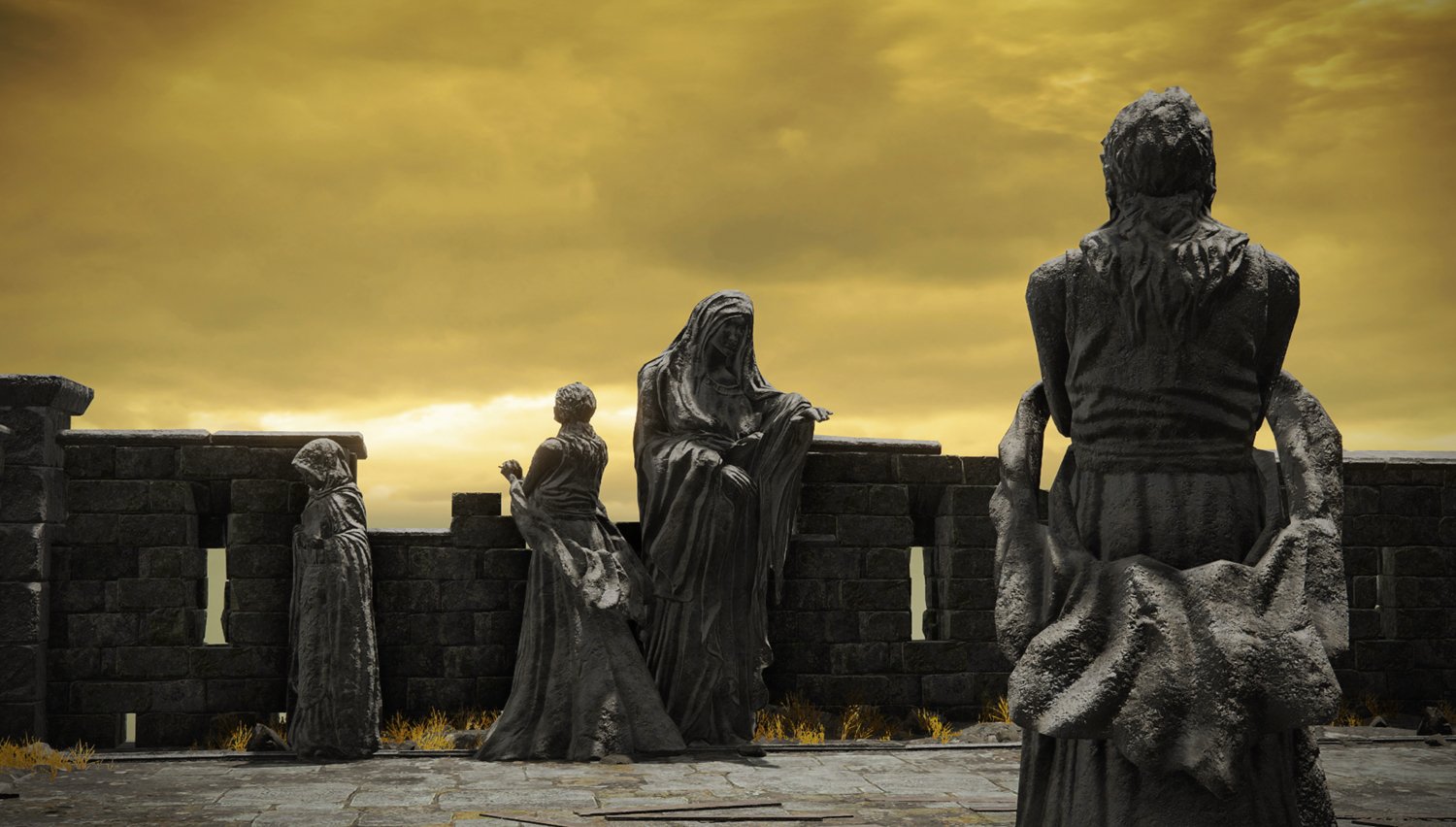 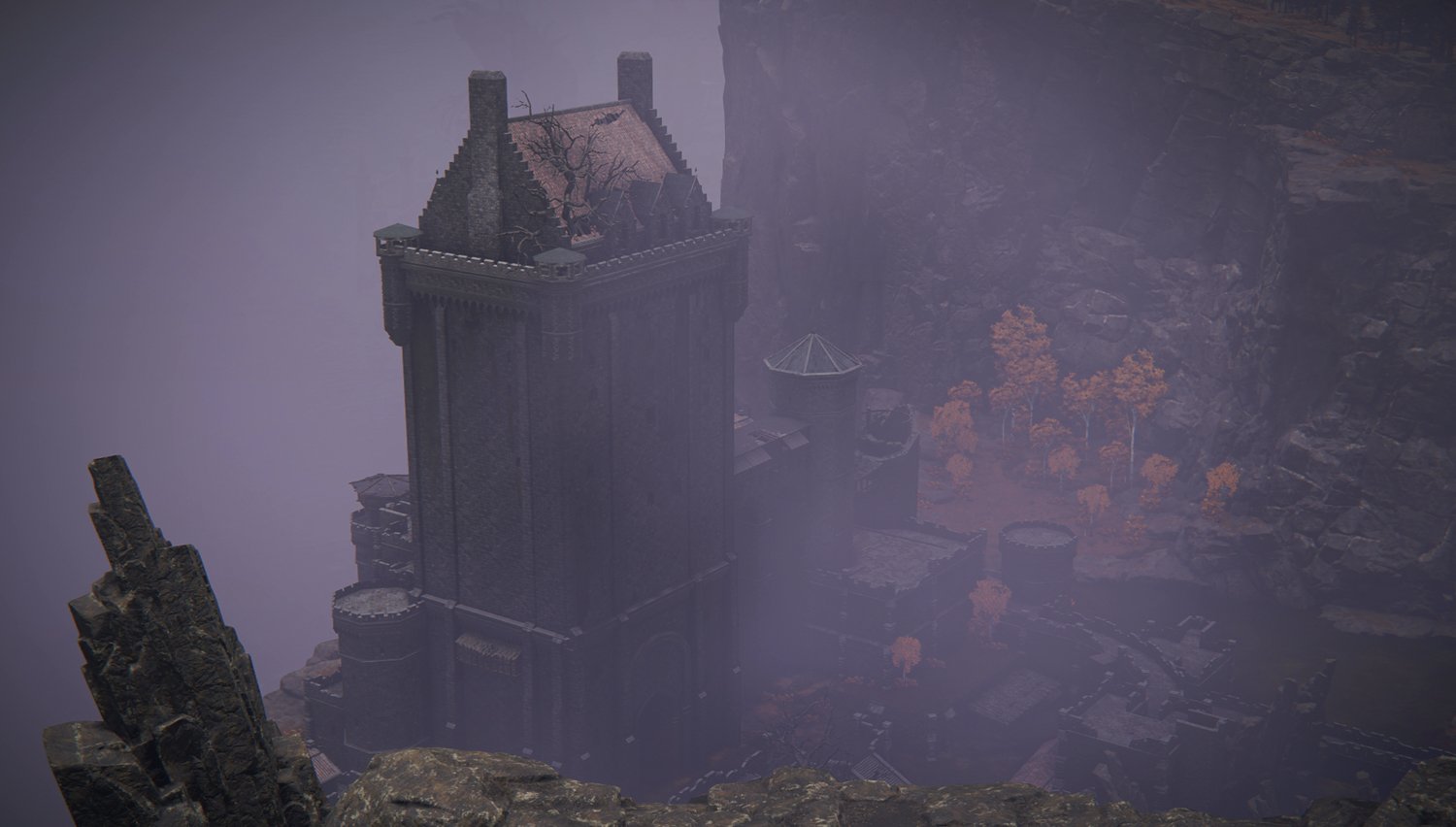 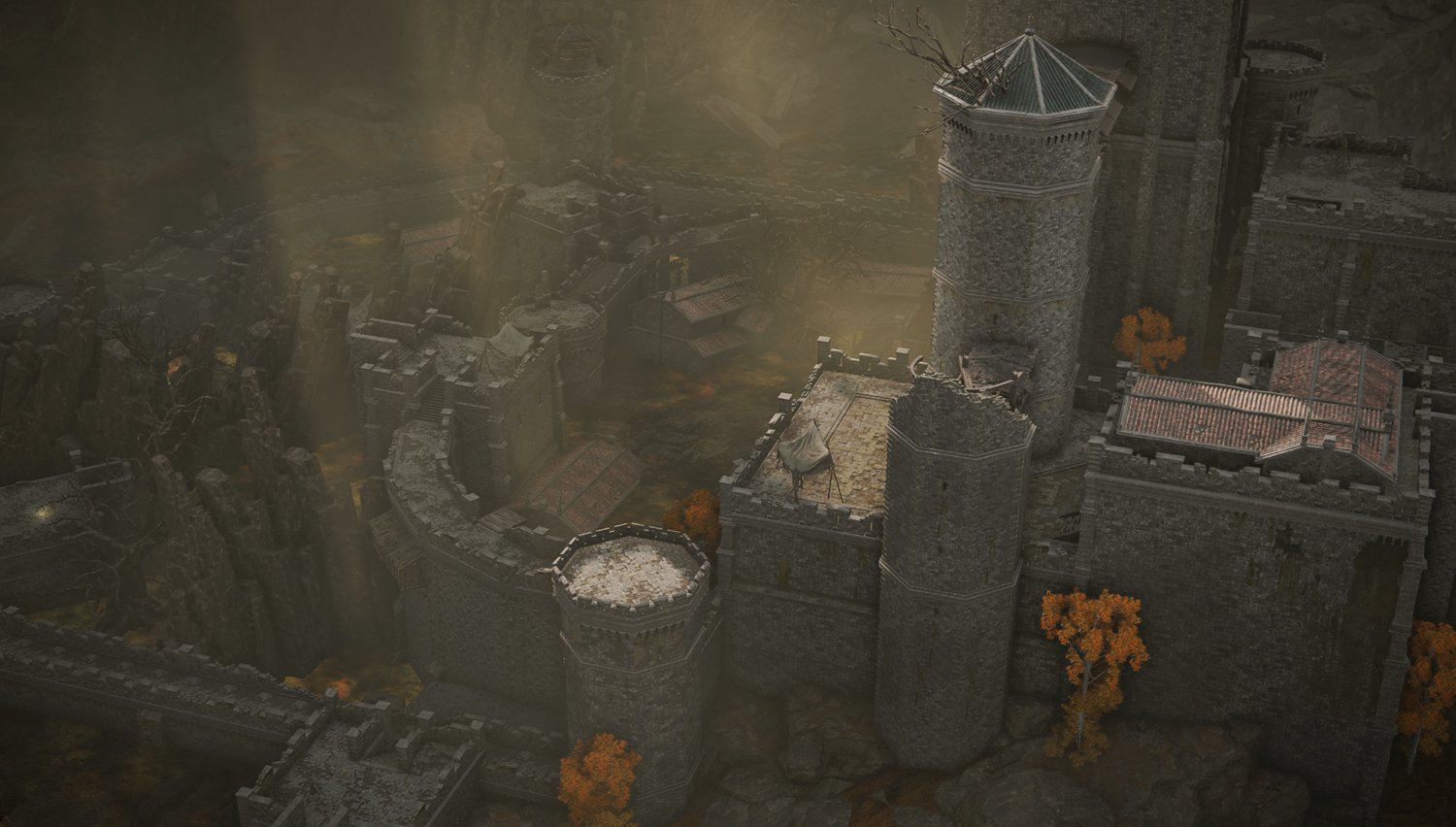