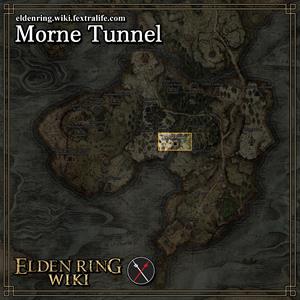 All NPCs and Merchants in Morne Tunnel

Morne Tunnel is a small optional dungeon where you can find materials, a weapon, and an optional boss at the end. Here are the Map Coordinates. Make sure you have a Torch here in case you need to light up dark sections within the tunnel. Note: you will automatically dismount from your Spirit Steed Mount as you enter.

Ride the lift down to Underground Level 1 and you'll find the site of grace for Morne Tunnel. Ride the elevator back to the top, move to the left side and jump down the platform. You should be able to grab x1 Smithing Stone [1] from the wall. Jump back down and continue moving south where you'll encounter a Misbegotten enemy.

Continue forward, walk on the narrow beam but be ready to kill two more Misbegotten enemies on the other side. Don't go towards the tunnel path on the right, instead, continue walking forward on the wooden platform and climb the ladder at the end. Kill the Miner at the top and make sure to check the wall it was mining to obtain x1 Smithing Stone [1] - go back down and continue towards the tunnel path.

On the other side, go down the stairs and kill more Misbegotten enemies. Loot the corpse sitting in between some crates and barrels to find x1 Golden Rune [2]. Look to your left and you'll see another Miner, backstab the enemy, kill it and make sure to pick up x1 Smithing Stone [1]. Turn around, check under the wooden platform where you'll encounter some resting Miners and another corpse you can pillage to find x1 Stanching Boluses. Go southeast and you'll see another Miner kill it and grab another x1 Smithing Stone [1].

Continue forward and you should see a small shack ahead. Outside the shack, there are two Miner enemies, specifically the one on the left side of the shack, is carrying x1 Cracked Crystal. You can grab this item from its body after killing it. Check behind the shack to find x1 Somber Smithing Stone [1] that you can grab from the wall, also there is another body you can pillage to find x2 Large Glintstone Scrap. Inside the shack, there is a corpse that you can loot to acquire x1 Golden Rune [4] and a treasure chest containing x1 Exalted Flesh. There is also another Miner inside - go back to the west side where you previously looted x1 Stanching Boluses off a body and continue through the tunnel path.

Prepare as you reach the other end since you'll encounter more Misbegotten enemies. There's a lot of them, we suggest you take them out one by one. You'll notice there are is a corpse being eaten by two Misbegotten enemies. Loot that body to find x2 Arteria Leaf. There are also Miners that are excavating, kill them and check the walls to find x4 Smithing Stone [1] and x1 Somber Smithing Stone [1]. Go through the tunnel path on the west side after clearing this section where you can loot x1 Soft Cotton off a corpse. Go back and proceed north where you'll see a closedwooden gate, don't open it first, check the right side and you'll find another x1 Somber Smithing Stone [1] - if you're prepared, open the large wooden gate to fight the mini-boss of this location, the Scaly Misbegotten.

The Scaly Misbegotten appears as a larger variant of the common Misbegotten enemy. It moves slow and wields a large axe. When it attacks, you can easily react to block or dodge its attacks when it start to swing the heavy weapon. If you are wielding heavy weapons, you can interrupt its attacks if you can land a jumping attack, hitting its head. If you land a critical hit, it temporarily gets stunned, you can attack it multiple times before it recovers. Successfully defeating it rewards you with 2000 Runes and drops the Rusted Anchor weapon - to return back to the entrance, simply use the white portal mist that will appear in the boss arena after the battle. 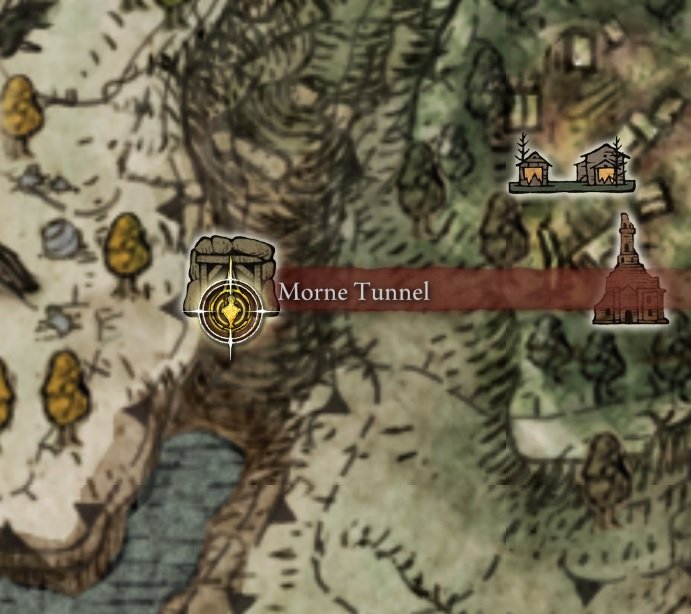