Forth Faroth is found by traveling East within Caelid's Dragonbarrow. See its exact location in the Elden Ring Map. 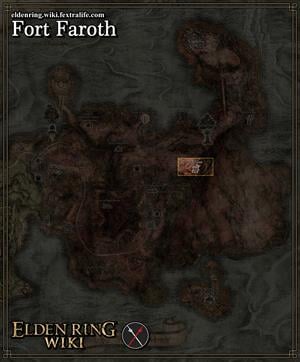 All NPCs and Merchants in Fort Faroth

Of note in this fort are the Dectus Medallion (Right) and the Radagon's Soreseal talisman.

To get the Dectus Medallion piece, head inside the main entrance and make your way through the dark room, fighting off the Giant Bats and Chanting Winged Dames. Beware as they are significantly tougher than any you've encountered in Limgrave. Once you reach the back of the room, climb the ladder to reach the top of the tower. There is a chest here containing the Medallion. It is one of two halves required to activate the Grand Lift of Dectus, with the other half being in Fort Haight in Mistwood.

To get Radagon's Soreseal, from the top of the tower with the Medallion, jump off onto the main roof, kill the Spectral Knight enemies, then drop down onto the wooden platform from the second smaller square opening on the top of the fort (it has a ladder to climb down, but you can just jump down). You then proceed on the wooden platform where you encounter a small rat. After killing it, you would need to make a running jump onto another wooden platform (perpendicular to the current one you're on) where you encounter a small rat and giant rat. After disposing them, just follow the path and ladder down to retrieve Radagon's Soreseal.

Elder Dragon Greyoll can also be found laying on the fields just west of the fort. She can easily be killed by equipping any Weapons or Skills that proc the bleed effect. She will not engage you but you should only attack her from her tail. Otherwise her lesser dragon underlings will attack. Killing Greyoll will yield 5 Dragon Hearts and also unlock Elder Dragon Greyoll's Roar at the Cathedral of Dragon Communion.