Elder Dragon Greyoll is a massive dragon, laying on the ground surrounded by five Lesser Dragons and is found in Caelid. When players encounter her, they will find her motionless and unable to attack.

This is an optional boss, but it is a popular one, as it can net players a large amount of Runes for the relative ease of killing her. There are two ways of defeating the boss. One is by killing all of the smaller dragons around her. Defeating each one takes off a portion of her health away from her, and defeating all five defeats this boss as well. Alternatively, you can avoid fighting all the smaller dragons and just chip away at her health by attacking her tail directly. It may take a while, but you get the same rewards no matter what method you choose to defeat her. Greyoll and her children drop five Dragon Hearts and unlock Greyoll's Roar for purchase when defeated.

Greyoll was the mother of all dragons, dwarfing all who stood before her like a looming mountain.

Elder Dragon Greyoll is a Field Boss found in Caelid

Elder Dragon Greyoll can be found in the Dragonbarrow region of Caelid, surrounded by smaller dragons. Map Link

Add Bloody Slash to simple Longsword, the hemmorage will help kill it faster. Any other Bleed attacks will speed up the attack process. Kill the small dragons in the area that appear when it roars and it will also deplete its health. Clearing them will fnish off Greyoll without actually having to face her. Likewise, clearing Greyoll herself will clear all the smaller dragons, and this is quicker. These smaller dragons move very slowly and are easy to run underneath most of the time to throw in some hits without taking damage. If you prefer, go ahead and approach Greyoll herself and throw in as many hits as you can until her HP bar depletes.

You don't need a fancy weapon. Simply add Bloody Slash  basic dagger and it will do just fine. As a ranged player, this will be a easy encounter due to their slow movement. They don't run at you and your main concern may be its lunge attacks that is still very slow and easy to predict. The time before its lunge attack while in the air is also a great opportunity to deal any ranged attacks. Continue this until all dragons are cleared then Greyoll will turn to ash.

Alternatively, if the player has no such weapon, instead of getting it he may try to kill lesser dragons with Rock Sling (while using Meteorite Staff). Headshots with rocks can deal quite a damage and poise-break them.

Any Faith build can use Ancient Dragons' Lightning Strike to cause large amounts of damage to Dragon enemies. With 70 Faith, one or two casts can kill multiple of her Dragon offspring simultaneously. 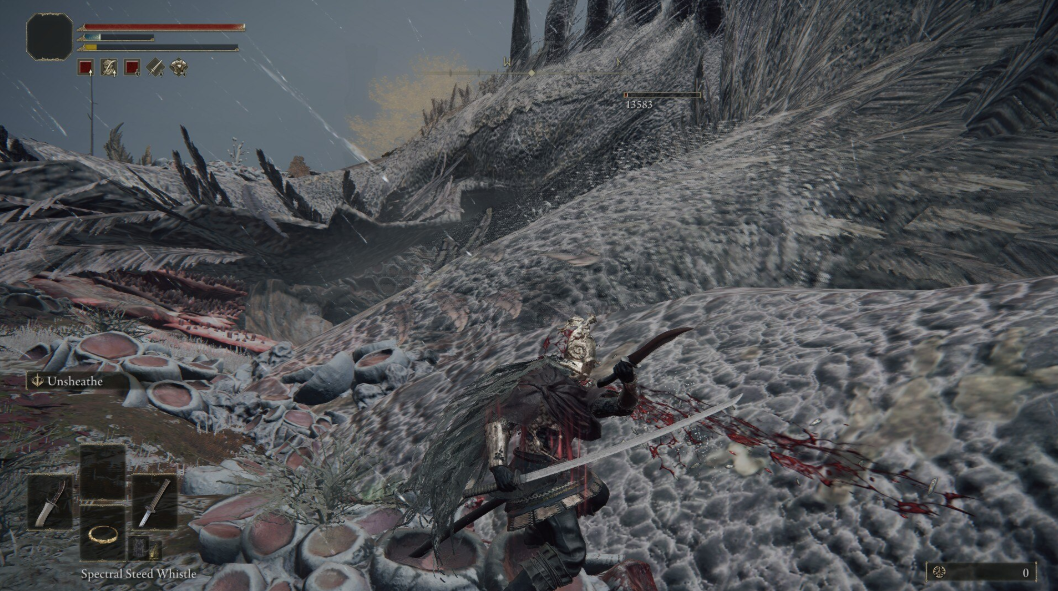