Commander O'Neil is another variant of this boss.

Commander Niall, veteran of Castle Sol, offered his prosthesis in exchange for the lives of defeated knights held prisoner. He went on to lead these men as an army of no nation.

From the Church of the Eclipse Site of Grace in the southeast section of Castle Sol, take the church's eastern exit towards another building. Go through this building and you'll arrive at the upper level of the eastern section. In this upper level you'll see Commander Niall's fog gate as well as a lift you can send down as a shortcut for future boss runs. [Map Link]

The resistance numbers are the buildup amount to trigger it. For example, if a resistance is 100 you must deal 100 points of the given buildup to trigger it. Note that these go down over time, and increase each time the effect procs.

The Best Tips for Commander Niall

Commander Niall is accompanied by two Spectral Banished Knights, one equipped with dual greatswords and the other equipped with a sword and shield. Success in this battle hinges on your ability to manage the two very dangerous knights. Niall himself doesn't get too dangerous until the knights are defeated. He will lumber around the arena, making no real effort to close the distance so focus on the knights at the beginning. Of the two, the dual sword knight is the most aggressive and dangerous. It is highly recommended that you summon a tanky spirit to more easily manage both knights at once. They are also susceptible to Magic Damage so Sorcery mains should have a slight advantage damage-wise.

The easiest way to be rid of the Banished Knights is to, immediately, after traversing the fog, run into the right-hand corner of the arena and await the charge of the dual-wielding Knight, and using a Bewitching Branch on him, turning him into an ally (it might take a few tries to get the timing right, the animation is rather long). This will cause the sword-n-board Banished Knight to immediately aggro him, while your new ally attacks Niall himself, ripping away a huge chunk of his health. Bewitch the second Banished Knight, while avoiding Niall's windstorm attacks, back away and summon your spirit ashes and apply any buff you need. Niall should have taken out both knights by this point (he kills them extremely quickly), or they will have brought him below 50% health, at which point they will despawn, as Niall enters his second phase.

Once the knights are killed, Niall begins actively pursuing you and using his more dangerous moves. Niall commands the powers of Ice via a whirlwind he summons around him, as well as Lightning via infusions on his prosthetic leg. Niall's most dangerous moves always involve him summoning whirlwinds of frost around him. He can then follow up with a stomp of his peg leg, infusing it with lightning and then leaping towards you to perform a powerful leg smash that creates a lightning shockwave on impact. He can also follow-up with two versions of a dash attack. The first is a single whirl of his halberd followed by a quick dash into an uppercut with his halberd. The second version sees Niall charging up for a few seconds as he sucks in frosty winds towards him, he then whirls his halberd several times, creating an expanding whirlwind of frost. Finally, he dashes to the side and then runs toward you, culminating in an uppercut with his halberd. This move tires Niall out and he will be kneeling and vulnerable for several seconds. This is the biggest damage window throughout his fight so be sure to dodge the uppercut and get as many hits in as possible as he recovers.

Start with heavy R2 On right summon dual wielding knight, the attack should land at or just before he materializes. Then a second heavy R2, and he should stagger. If lucky, you can get a crit in which should kill him at appropriate level for this boss and you will be invulnerable. Roll away and or heal. Next bait out the 2nd summon and do a running R2, back up, rinse and repeat. If he teleports to you, roll behind him. Be selective. Running R2 should bait him into an attack and an auto stagger when he is walking with his shield up. You have plenty of time on the 2nd summon as the boss will be passive during this phase.

Next the Commander Niall will charge up frost and electric attacks after his summons have died. Roll at the last second for his attacks. When he charges his leg and flip kicks, roll to his right (your left) to get an opening for an attack. He does a delayed heavy swing after one consecutive attack he has where you should roll twice in a row to dodge it every time, and then punish him accordingly with a few swings. When he does a frost wind and then a charged electric attack, dodge roll into a single r1, watch for a quick poke and then a heavy telegraphed swing, again rolling to your left. Now the charged electric stomp AOE, difficult to manage and hard to avoid. With the swinging frost winds, he has multiple attacks that look similar to this. The one you're looking for is a melee attack ending that you can punish. The other frost AOE should be avoided. So just manage close range and then outside his AOE blasts. Managing your distance and opportunities is key. You should stay up close to him and back away when you see a frost swing coming. Upon one of his charged frost and electric attacks he will kneel and pause for a huge opportunity to hit him with heavy R2s, you should be able to stun him and deal a crit. Definitely dealing with the summons without getting hit was a big advantage to have as much flasks as possible to fight him, because his electric AOE stomp is near impossible to avoid when up close. After frost winds, be ready to charge in.

For magic and ranged users, you would want to equip a heavy-hitting spell/incantation for this fight. As stated above, defeat the two knights first before engaging Commander Niall. For a bow and arrow user, try equipping arrows or bolts that has status effects on them like bleed or rot.

If you have the Comet Azure spell, cast a Terra Magica at the edge of the Mist gate (make sure the knight outside the arena is already killed), consume a Flask of Wondrous Physick with a Cerulean Hidden Tear to nullify FP consumption. Once you enter the boss arena, immediately lock on to Commander Niall then charge and release your Comet Azure. It is also recommended to add a Magic-Shrouding Cracked Tear besides the Cerulean Hidden Tear for increased magic damage. This setup will most likely one-shot Commander Niall, even on higher NG+ playthroughs. 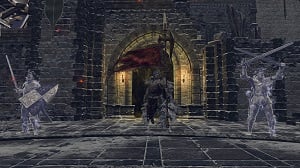