Demi-Human Queen Maggie is a Field Boss found at the Hermit Village in Mt. Gelmir. See them on the Map.

Demi-Human Queen Maggie can be found at the Hermit Village in Mt. Gelmir. Getting to this village requires going around the volcano starting from the north towards its western edge, heading south and then east, past Hermit's Shack and Craftsman's Shack. They can be found in the north-east of the village.

When dealing attacks and running within range, be aware of the rocky terrain so you don't get stuck for one of its counter attacks. It would be more beneficial for this strategy if you could lead her to flatter ground, if not just be aware of the rocks in the area. The boss has lot of similar action movesets. Basic slam sets with either her hand or staff can be avoided by rolling forward which will also put you in a better position for you next attack. If remaining in close range, she will rarely use her magic attacks. Try as much as possible to stay close to her to deal melee attack damage. A lot of her attacks will also only affect mid range but can be avoided when you stay close. Try to always circle behind her. If too close be ready to quickly roll back for her closer range smash attacks.

With longer range, she has a limited set of magic attacks. These spells she uses are basic glinstone projectile spells and can be easily avoided as soon as they are casted and you see the direction they are heading. If using magic, just be cautious because it can enrage her. You can also choose to use the same type against her, the " target="">Glintstone Shard. When choosing this method, make sure you keep circling around her and keep moving so she won't be able to target you as easily. 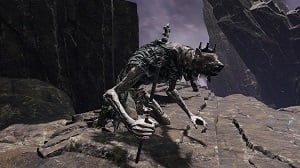