Godfrey, First Elden Lord (Golden Shade) is a Boss in Elden Ring. This is a spectral shade of Godfrey that is encountered in Leyndell, Royal Capital. This is NOT an optional boss as players MUST defeat it to advance in Elden Ring.

Godfrey, First Elden Lord (Golden Shade) can be found in a room located at the top of the branches that can be accessed to the south of the Western Rampart Capital site of grace in Leyndell, Royal Capital. [Elden Ring Map Link]

Godfrey attacks very agressively and sporadically, often combining slow and fast attacks in a lengthy combo. Attacking after a slow attack in his combo and dodging through the fast attacks will allow you to whittle down his health. As for the weapons, you can either use a heavy, colossal, or any fast weapons. Avoid using weapons that deals holy damage, try for ones that has pierce or lightning damage. If you're using a heavy or colossal weapon, don't go for a combo, no matter what type of attack he throws at you. He will most likely switch up his attacks from slow to fast and fast to slow swings. If you're using a fast weapon, you can maybe manage to get at least two to three hits after a slow attack, just don't get too greedy.

For magic and ranged users, heavy-hitting spells/incantations and skill are the key if you don't really wanna use any melee. The same strategy above applies here, you have to be wary that this boss can combine slow and fast hitting attacks in a single string. His range options are limited but he can rush you down if you're not careful. Equipping talismans, runes, or armor that can help in reducing the cast time of spells is useful for this fight if you're a magic user. 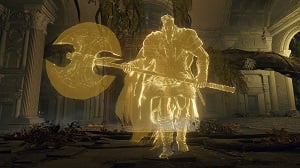