Wormface is a Boss in Elden Ring. Wormface is a large, humanoid creature wearing a long cloak with a head comprised mostly of worms and is found at the Minor Erdtree in Altus Plateau. It is the greater version of the Lesser Wormface that can also be encountered. This is an optional boss as players don't need to defeat it to advance in Elden Ring.

Wormface can be found by the Minor Erdtree between the broken bridge and the Woodfolk Ruins. [Map Link]

The Best Tips for Wormface:

As a melee user you are susceptible to whenever it performs its mid ranged Death Blight attacks so you will have to be extra vigilant. When anticipating its spewing and cloud release. Try to have larger trees to your side to have something to duck behind. To quickly deplete its health as a melee user, as much as possible you can hug this creatures feat, but circle behind so it cant grab you and deal your series of attacks on its legs from behind. This creature has one of the more slower moving actions but its attacks deal great effects so be careful when running in. Run in between attacks and keep to its legs from behind so you are out of range to be affected by melee attacks as well. Keep focusing on hitting its legs until it is defeated. Bring extra talismans that can mitigate death blight for more aid and Rejuvenating Boluses to decrease buildup.

Keeping at long range against this boss may invite it to also counter with its main long ranged Death Blight attack. Getting hit by this puke attack causes serious damage and serious Death Blight buildup. Since it is encountered in the open world, use large trees to your advantage to avoid its effects. At mid range, you can also still be affected by the cloud AoE it releases. This moves relatively slowly so back away as this approaches. At this range the wormface may also attempt to run at you. It isn't a very quick dash however it closes the distance very quickly and then will usually follow up with an attempt to grab. From here, circle away from its grasps, if you would like at this point, temporarily switch to melee to get some hits on its legs. Since it doesn't have the fastest actions, with ranged combat wait for its attacks to and and deal an attack of your own in between each completed action until its HP has depleted. Use Order Healing and Law of Regression for curing if available. 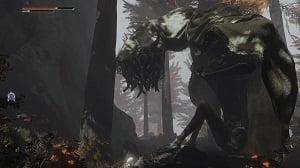 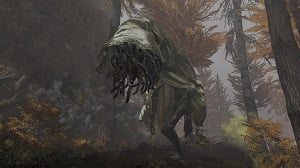