This is an optional boss as players are not required to defeat it to advance in Elden Ring. However, doing so awards useful Items as well as Runes. Black Blade Kindreds boast a large amount of HP and high damage. It may be wise to keep your distance or prepare Consumables that bolster your defense if fighting up close. The one at Bestial Sanctum can be fought very early in the game, but it is recommended to hold off and fight it later in the game when you've levelled up and are more prepared. They drop the Gargoyle's Blackblade, Gargoyle's Black Halberd, Gargoyle's Black Axe and Gargoyle's Black Blades when defeated.

Valiant Gargoyles that have been mended with blackened corpse wax.

Such is the mark of those who serve Maliketh, the Black Blade.

Black Blade Kindred is a Field Boss found in Dragonbarrow and the Forbidden Lands.

Black Blade Kindred bosses can be encountered in the following locations:

At the Bestial Sanctum, you can stand on the ledge to his right and most of his attacks will not reach you. He will aggressively attack the corner, but the difference in elevation will keep the attacks from connecting. However, he will eventually become unstuck, usually when a leaping attack carries him up the stairs or a jump back lands him on the opposite ledge. The railing in the corner also is an obstacle to many ranged attacks. Standing on top of the railing or on horseback can help with this, but puts you more at risk of him becoming unstuck or you falling off.

It can be cheesed relatively easily at Bestial Sanctum, but its high HP and the range of the roar attack can make it very tedious. Its initial position makes it very easy to get in a single attack, and it will de-aggro easily and return to that position given enough time. Using ranged attacks, you can exploit this to safely attack once or twice, run to safety, and wait for it to return to the base of the steps and turn around.

It cannot enter the Bestial Sanctum, but most of his attacks can still hit you through the walls. The roar attack can reach all the way to the Bestial Clergyman (who mercifully will ignore being hit by it), so trying to attack from inside the building is not an effective approach. But if you run all the way to the back of the Sanctum, behind the Clergyman, he will eventually de-aggro and return to his original position.
Another reliable approach for this method is the right ledge. You can easily land a magic attack from there (dragon breath spells can pass through the railing as well), and have enough time to summon the horse and run away. Instead of running into the sanctum, where you might get hit with a roar before you can get to safety, run around the side of the building. There are a number of obstacles in that direction that slow him down and shield you from a roar. You can simply circle the building at your own pace, and from the other side, you can stay out of sight and see when he returns to the base of the stairs. It seems to take a shorter amount of time for him to reset, compared to hiding in the sanctum. 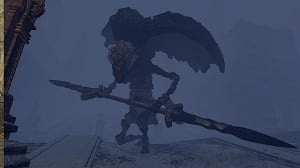