Erdtree Avatar is a Boss in Elden Ring. Erdtree Avatar is a large, headless creature that looks like a tree stump wielding a large staff, and is found in multiple locations, guarding the Minor Erdtrees. Each avatar drops a different set of Wondrous Flask-related materials. This is an optional boss as players are not required to defeat it to advance in Elden Ring. Not to be confused with the Putrid Avatar, a variant that inflicts scarlet rot.

There are multiple Erdtree Avatar bosses that can be found in the Lands Between:

Non-boss variants of the Erdtree Avatar can also be encountered in the following locations:

The Best Tips for Erdtree Avatar:

Setup: Put a decent number of Rowa Raisins in a quick item slot. Equip enough armor to survive a staff swipe. Surviving an overhead mace smash is less important. Take a look at the environment. The tight quarters around Caelid's Minor Erdtree means you need to adjust your strategy from a circle to a forward and back flow. You can use the Avatar to kill enemies in the area, including stronger ones like minotaurs. Don't bother with ashes. The summoned NPCs die too fast, and more importantly, it's difficult to tell which direction the Avatar is swinging. It's much easier to learn how to dodge it's simple attacks instead of relying on ashes to distract it.

Circle around the Avatar to the left, slashing it in the back until it starts a windup, then move away. Go for one hit until you learn the timing better, and then start increasing the number of attacks.

If the Avatar winds up, run away. If the Avatar jumps, run away and be ready to heal Torrent. If the Avatar smashes the top of the hammer into the ground at it's feet, run around in circles at mid range until all of the holy spears pass. Repeat until the Avatar is chopped down.

Ranged Mounted should do the exact same thing, just without diving in to melee. Don't try and cast while it is swiping at you, its size allows it to close gaps much faster than expected. Burn it with fire.

Melee is nearly the same strategy as Mounted Melee, but you'll need to dodge its swings and jumping AOE. You should try and get some distance for the holy spear attack.

When you encounter the one at the Mountaintops of the Giants, most of its move is similar to the ones you've already fought before, except that it can summon a clone. The clone shares the same health bar as the original Erdtree Avatar, so focusing your attacks on either one of them is just fine. The strategy for this is when the clone is summoned, try separating them and focus on one Erdtree Avatar only since they share the same health bar, it doesn't matter who you attack. If you manage to separate them far away enough, the other one will de-aggro and stop following you.

The Erdtree Avatar located at Caelid is also challenging, as most of its attacks will inflict scarlet rot on you. The move you need to watch out for is the Scarlet Rot Stomp, where puddles of scarlet rot poison will scatter around the area. Don't try and attack him when the scarlet rot is still around, as it will linger for a while on the ground. Just wait for the boss to do its normal attacks, dodge accordingly and get in a few attacks in when possible to chip away its health.

Bring your desired ash spirit. the Lone Wolf Ashes, Mad Pumpkin Head Ashes, or Spirit Jellyfish Ashes are all good choices, since the Wolves summon three, and the Mad Pumpkin and Jellyfish are both very tanky and they can keep the Erdtree Avatar busy for quite a while. Glintstone Pebble can take him down if you have good spacing and time. Just be sure to back away when needed, and then begin your assault again.

Alternatively, you can equip the Flame Sling incantation, mount Torrent and sprint around the Boss, while hurling fireballs at them. Be sure to explore the surrounding area carefully so you don't get stuck or fall off a cliff. If the Erdtree Avatar tries attacking, just sprint back or to the side. Prepare several Flasks of Cerulean Tears so you don't run out of FP.

Only be aware of its massive staff as it deals a huge amount of damage. 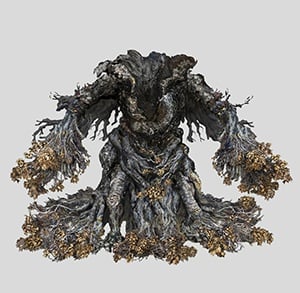 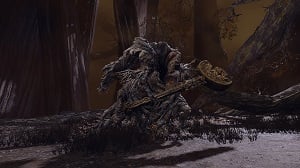 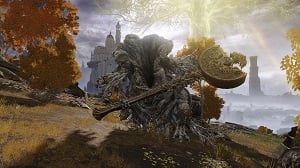 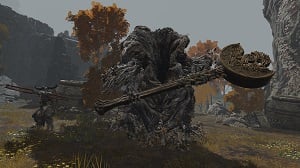 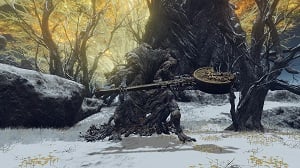