Putrid Avatar is a Field Boss in Elden Ring. They are guardians of the Minor Erdtrees, despite being rotted from the inside. A few can also be found guarding Elphael from intruders.

Guardians of the Minor Erdtrees, infested with Scarlet Rot. Their large staff can knock foes away, and their slam attack releases a cloud of rot, quickly leading to enemies’ demise.

Where to Find Putrid Avatar:

Non-boss variants of the Putrid Avatar can also be encountered in the following locations:

The Best Tips for Putrid Avatar:

Try using fire grease as it is incredibly weak to fire as mentioned above. Whenever the putrid Erdtree jumps it spits off scarlet rot in the direction it is currently facing also causing aoe damage to the player. This can be avoided by dodging to the side and following up with a couple of jump attacks. To avoid getting caught up in his scarlet rot keep rotating 45 degrees clockwise in order to have more space to dodge it. Whenever the avatar slams its Staff of the Avatar to the ground it will create a massive shockwave which is followed up by beams of light homing into you. This, however can be easily avoided by running into the avatar and rolling when it attacks.

For magic and ranged users, bringing some spirit ash of your choice can be quite helpful in this situation. Your spirit summon can distract the boss while you cast away your spells/incantations or shoot your arrows. It's important that you maintain distance especially when you see the boss jump in the air, the scarlet rot stomp is dangerous and can eat away your health very quickly. 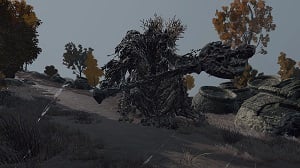 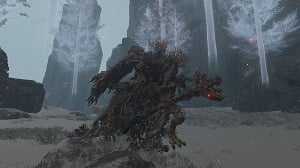