The Royal Grave Evergaol is accessed by leaving Caria Manor estate via the backdoor, going behind the estate walls and heading east. [Elden Ring Map Link] 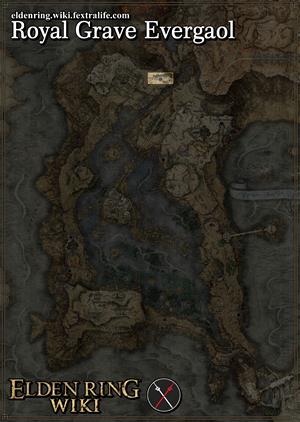 All NPCs and Merchants in Royal Grave Evergaol

The Royal Grave Evergaol does not require a Stonesword Key as the portal mechanism is active as soon as you reach the location. Inside, you will face its prisoner: the Onyx Lord.

Onyx Lord only has a few moves in his repertoire and it is relatively easy to discern his patterns. Consider fighting him on the outer edges of the arena as the center has uneven terrain which can cause his meteorites to impact with the ground near you, dealing splash damage.

Onyx Lord has three main attack patterns: Meteorite, Slice and Dice, and Lightning Orb. He will rarely diverge from these attacks. Meteorite has a very long animation and should be exploited. After he plunges his sword from the ground, you can try and get behind him for one or two hits. The meteors don't track very well at melee range and they are unlikely to hit you this way. His Lightning Orb attack comes out very quickly, has very good tracking and requires precise timing to dodge. His Slice and Dice move begins with a diagonal dash to his left as he slashes upwards followed by a large, sweeping slash in the opposite direction. Dodging through the first slash towards his right side should prevent the second slash from hitting you and will position you behind him for a quick counter.