Jarburg is a Location in Elden Ring. Jarburg is found in Liurnia of the Lakes. To reach this area, go to the Artist's Shack and head to the cliff just south of Carian Study Hall. There's no direct path, you need to jump from the cliff down the stone platforms to get there.

Jarburg is an excellent location to pick up Cracked Pot and Ritual Pot, as well as to farm for a variety of plants, which the town has in abundance very close to a Site of Grace. Unlike their kin found in other areas, the living jars here are non-hostile NPCs that cannot be targeted.

After 1.03, a new NPC called Jar-Bairn can be found here.

From the Artist's Shack site of grace (Liurnia), go southeast until you reach the edge of the cliff just south of Carian Study Hall. Look downward to the east to find platforms you can fall safely fall down to, and continue to jump down onto these platforms until you reach the bottom. The Jarburg Site of Grace will be just to the right of where you land, near the biggest wooden building. See it on the Elden Ring Map here. 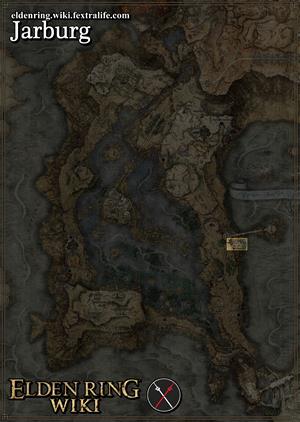 All NPCs and Merchants in Jarburg

All Items in Elden Ring's Jarburg

From the last stone platform before reaching the village, jump onto the roof of the closest hut to loot 3 x Smithing Stone (3) and then touch the Site of Grace in the southeast. Head back to the first hut and walk along the cliffs behind it. Jump onto the roof of a hut in the north for a Ritual Pot, then drop down and look behind you for a Cracked Pot.

Check the hut in the northeast for another Cracked Pot and a Living Jar Shard. Head south from here and look to the right for a large decorative jar. On top of it is another Ritual Pot. Use the boulders nearby or your horse to get on top of the jar. Continue heading south and look at the large headstone to the left for one last Cracked Pot. Further south past the village proper, you will find a cluster of sarcophagi where you can loot a Golden Rune (1), 2 x Golden Rune (2), 2 x Golden Rune (3) and a single Golden Rune (6).

The village is also rich in plants used for crafting and there is no danger here. See the full list of gatherables above. 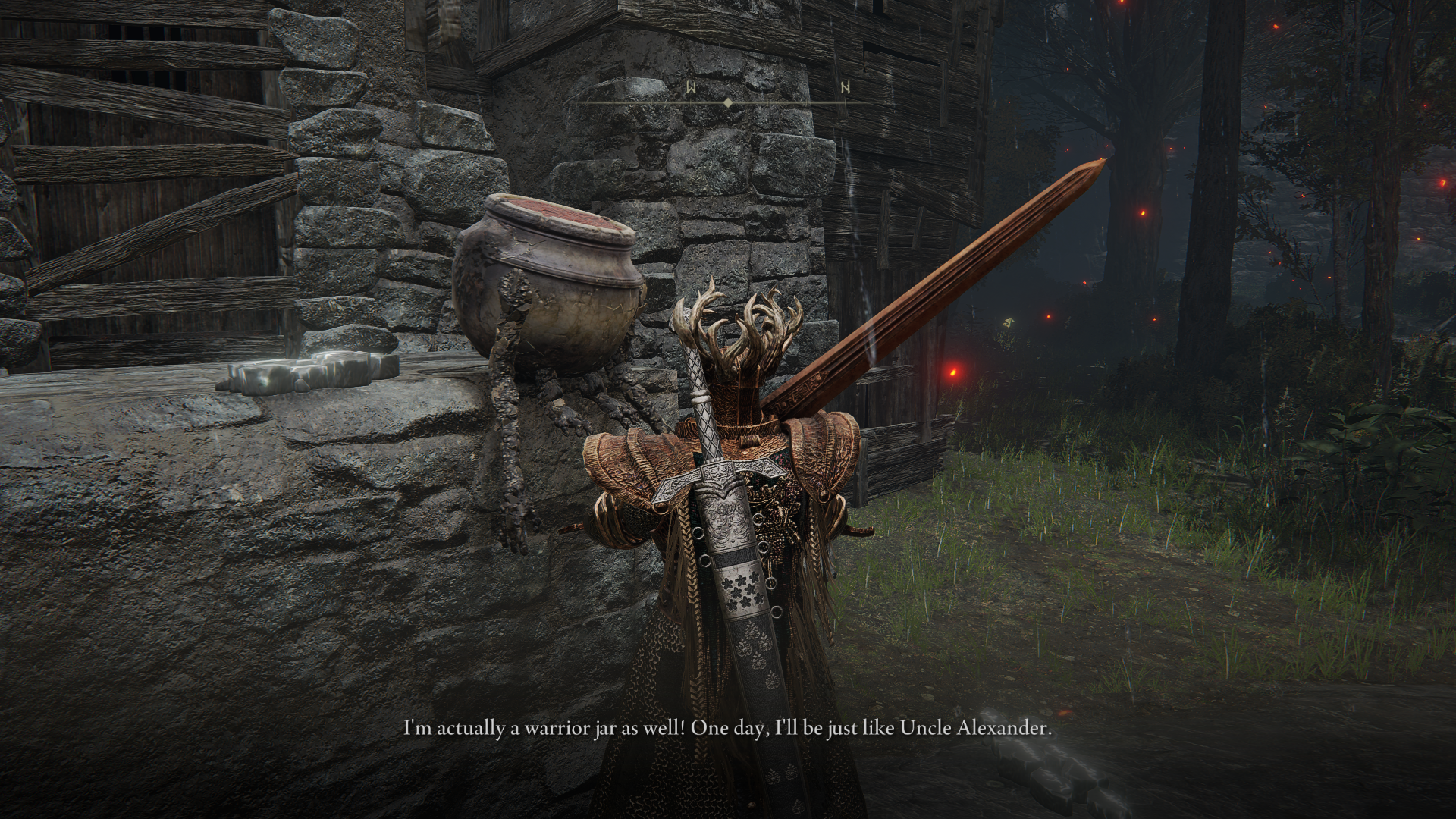 Upon loading up into Jarburg, Jar Bairn will be to the left sitting on the steps to a house, upon exhausting all his dialog and resetting the area a few times, Diallos will show up in a hut down the road (the one with the little hostile jar) and will be patching him up explaining how he put everything at Volcano Manor behind him. Upon exhausting both Diallos and Jar Bairn's dialog, the town will be attacked.

Reloading the area, Jar-Bairn can be found where he is found initially and can be given Alexander's Innards. Complete the Diallos Questline to be able to loot a Hoslow's Petal Whip, Diallos's Mask and Numen's Rune at this location. After reloading, the Companion Jar talisman can be found where he was completing those questlines.

After patch 1.03, Jarburg has a new NPC named Jar Bairn. He is the nephew of Alexander and is a continuation of his and Diallos’ questline. 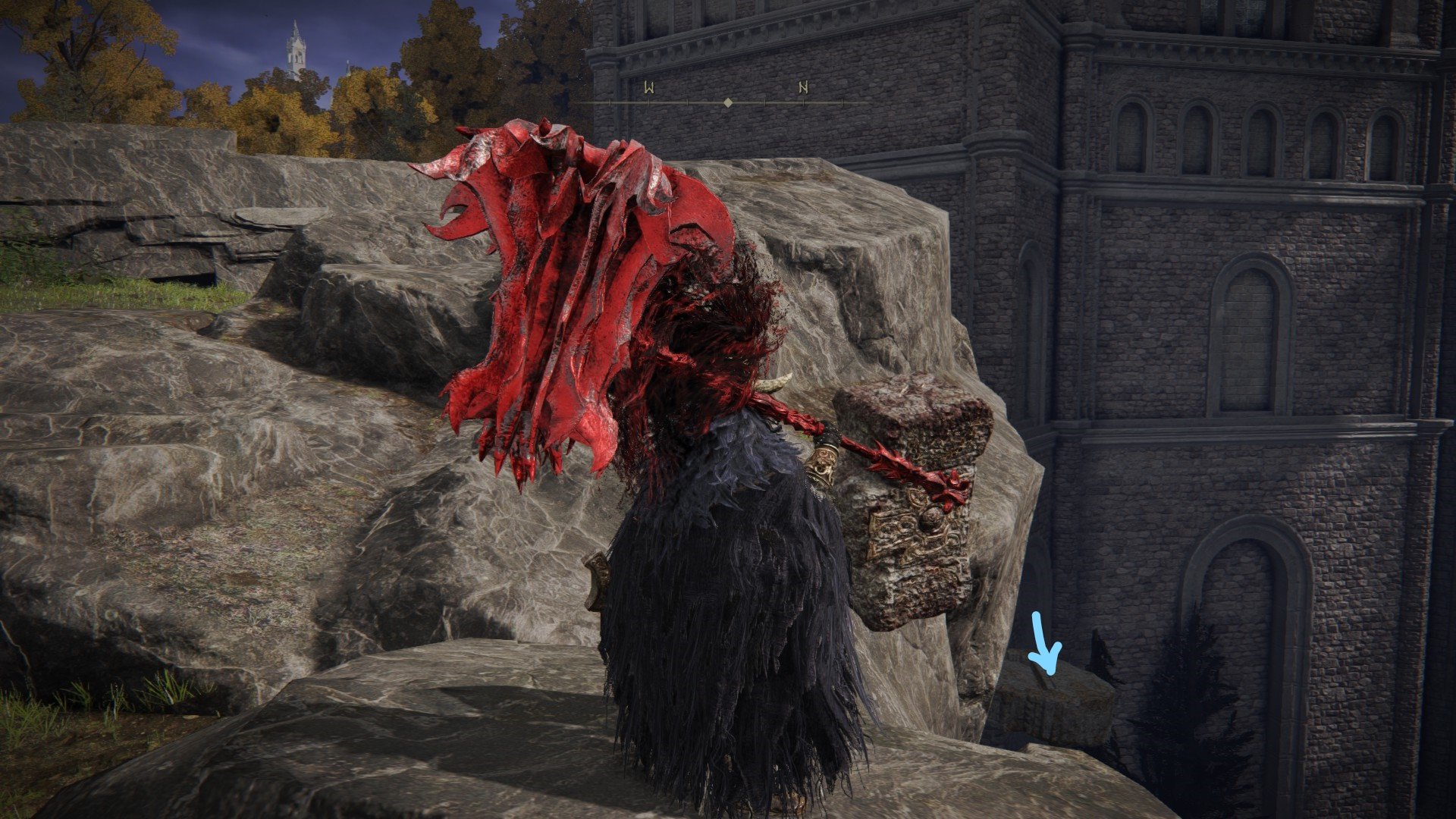