Hidden Path to the Haligtree Map 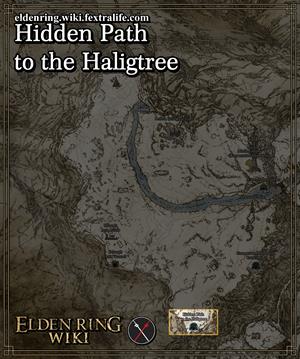 All NPCs and Merchants in Hidden Path to the Haligtree

All Items in Elden Ring's Hidden Path to the Haligtree

Hidden Path to the Haligtree Walkthrough

Inside the Hidden Path to the Haligtree, there are two paths you can take. The main path which leads you to the Consecrated Snowfield which is your main goal, and a second path that leads underneath, deeper into the catacombs to some treasure and an optional boss.

To the Consecrated Snowfield

After opening the gates, you'll arrive in a large hall with a large staircase to your left and a small chapel straight ahead in front of you. In this chapel, there's a body holding a Warming Stone by the altar. Beware, however, of the two Land Octopuses and a single Giant Land Octopus that will drop down from above the chapel.

Back in the main hall, make your way up the stairs while fighting off a couple of Vulgar Militants. Note the broken section of railing to your left at the midpoint of the staircase. There is an invisible walkway below that you can reach by dropping down from here. Ignore it for now and continue along the staircase. 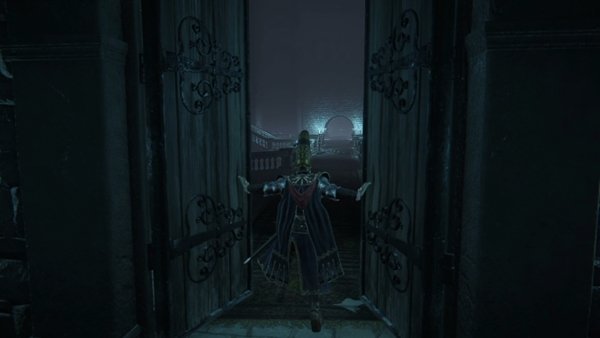 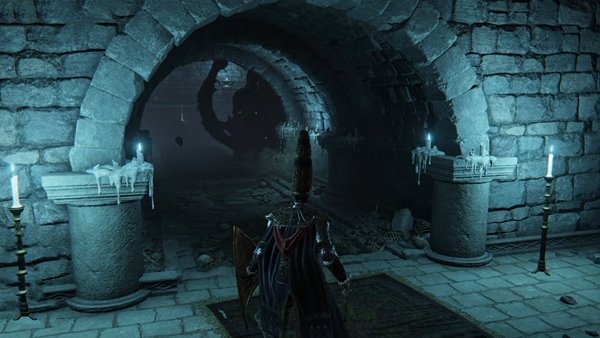 At the top of the steps, another Giant Land Octopus will drop down from below. Past that, head up another set of steps and you'll come across two Land Octopuses on your left guarding a Grave Glovewort [9]. On your right is another set of stairs leading up to the Site of Grace, followed by the exit that leads you to Consecrated Snowfield. 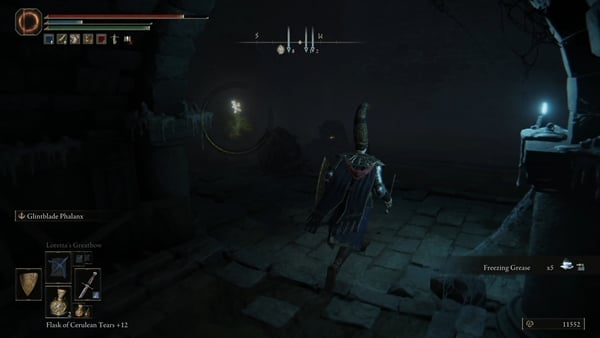 To the Secret Catacombs 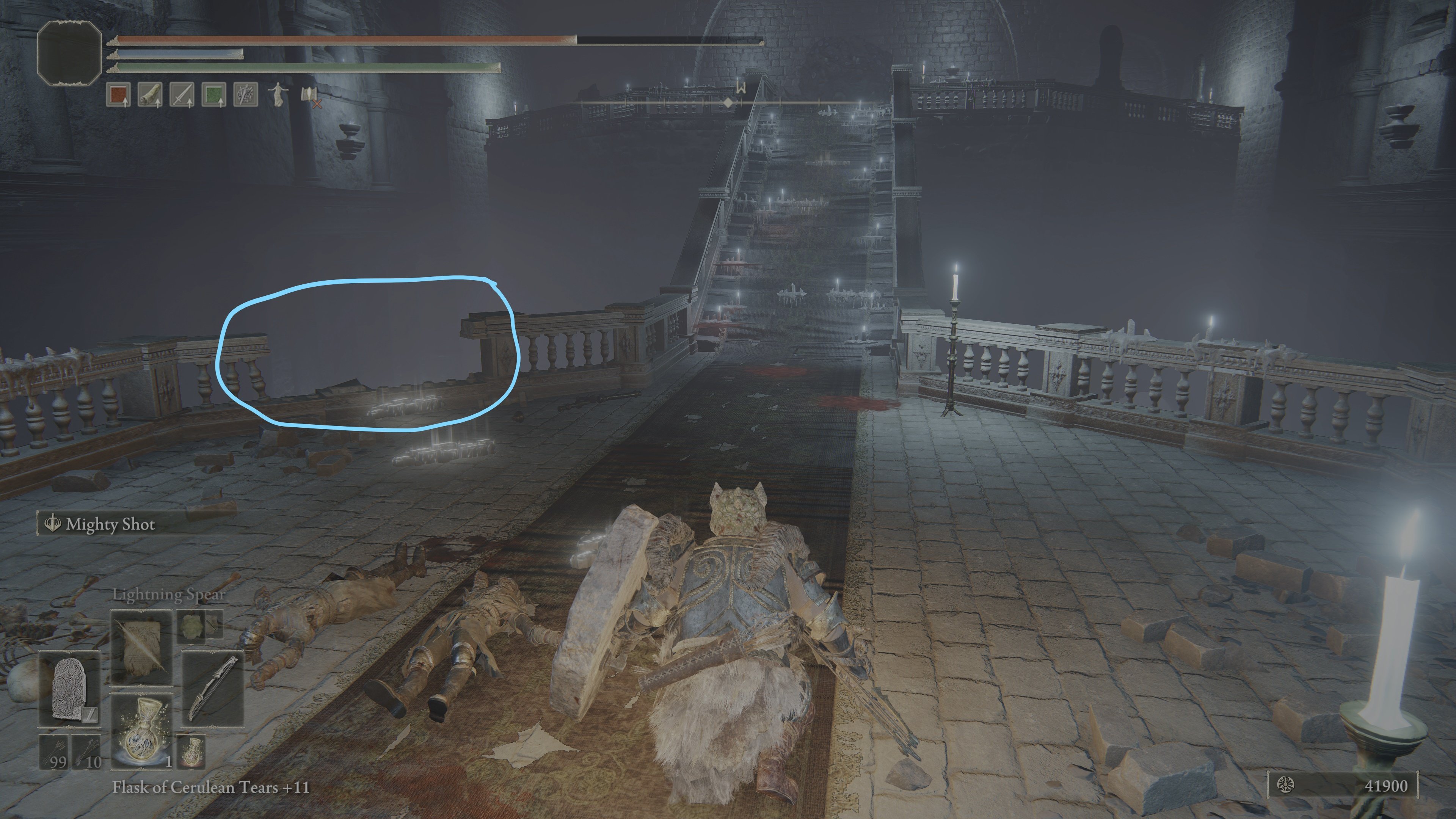 Looking down, you should be able to see an alcove along the walls across the pit. Walk to the ledge and drop a Rainbow Stone or Glowstone, etc., to ensure solid landing. Walk forward to drop to the invisible floor. Once on the invisible floor, you can move straight ahead into the alcove. Again, refer to the image below. 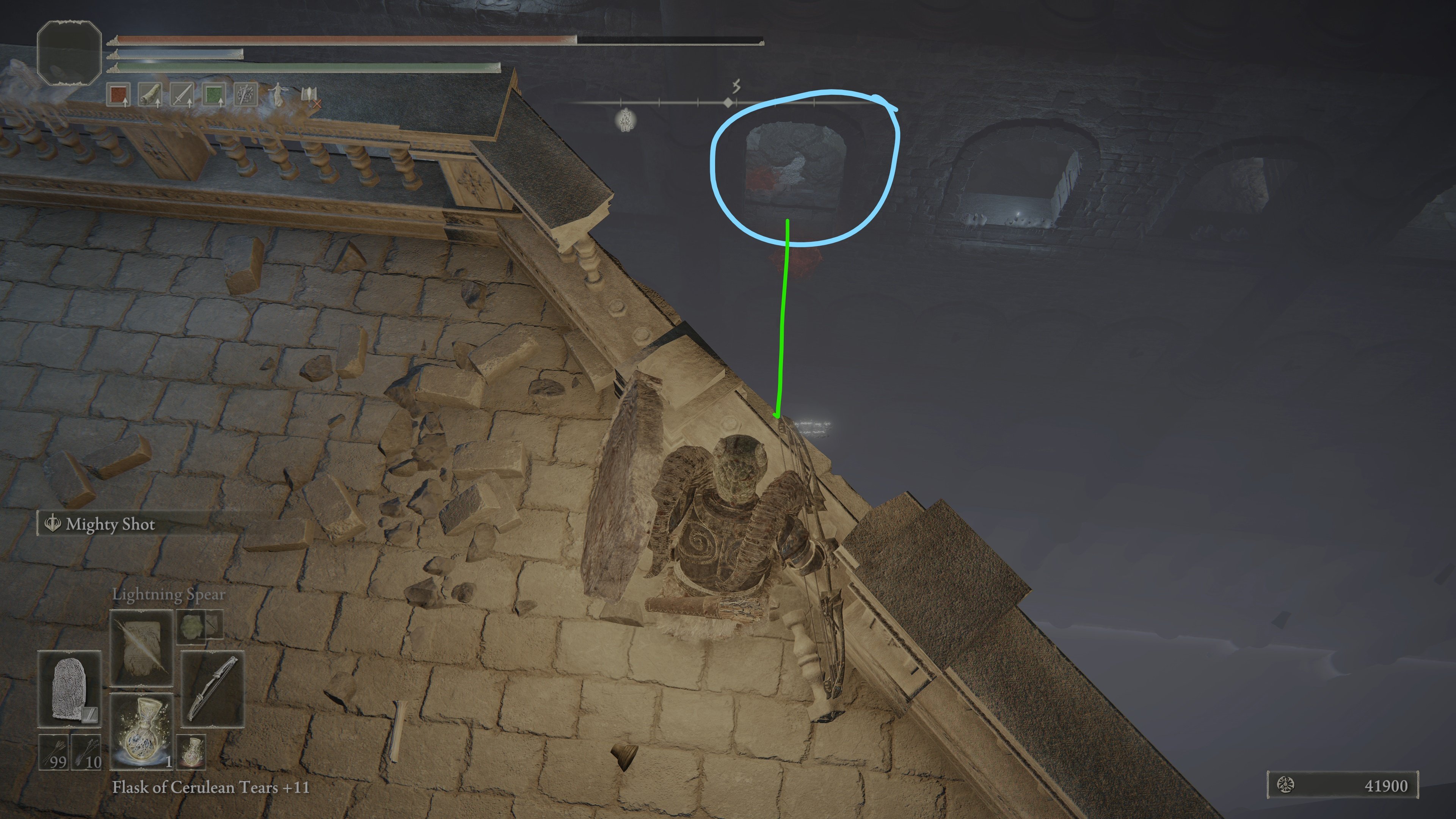 Those finding themselves gripped with paranoia, you can continue to use Rainbow Stones, Glowstones, Rainbow Stone Arrows, Wave of Gold and/ or Hoarfrost Stomp to ensure proper footing. (-Sidenote: If you can spare the FP, Hoarfrost Stomp will only populate the ground with visual icicles on level/ solid surfaces and, as such, this Ash of War is extremely useful here, further in, and in navigating any invisible floor/ entry into the Heretical Rise.- end side note). Now that you've entered the alcove, turn right, there's a Grave Glovewort (9) to pick up and behind it, an illusory wall. 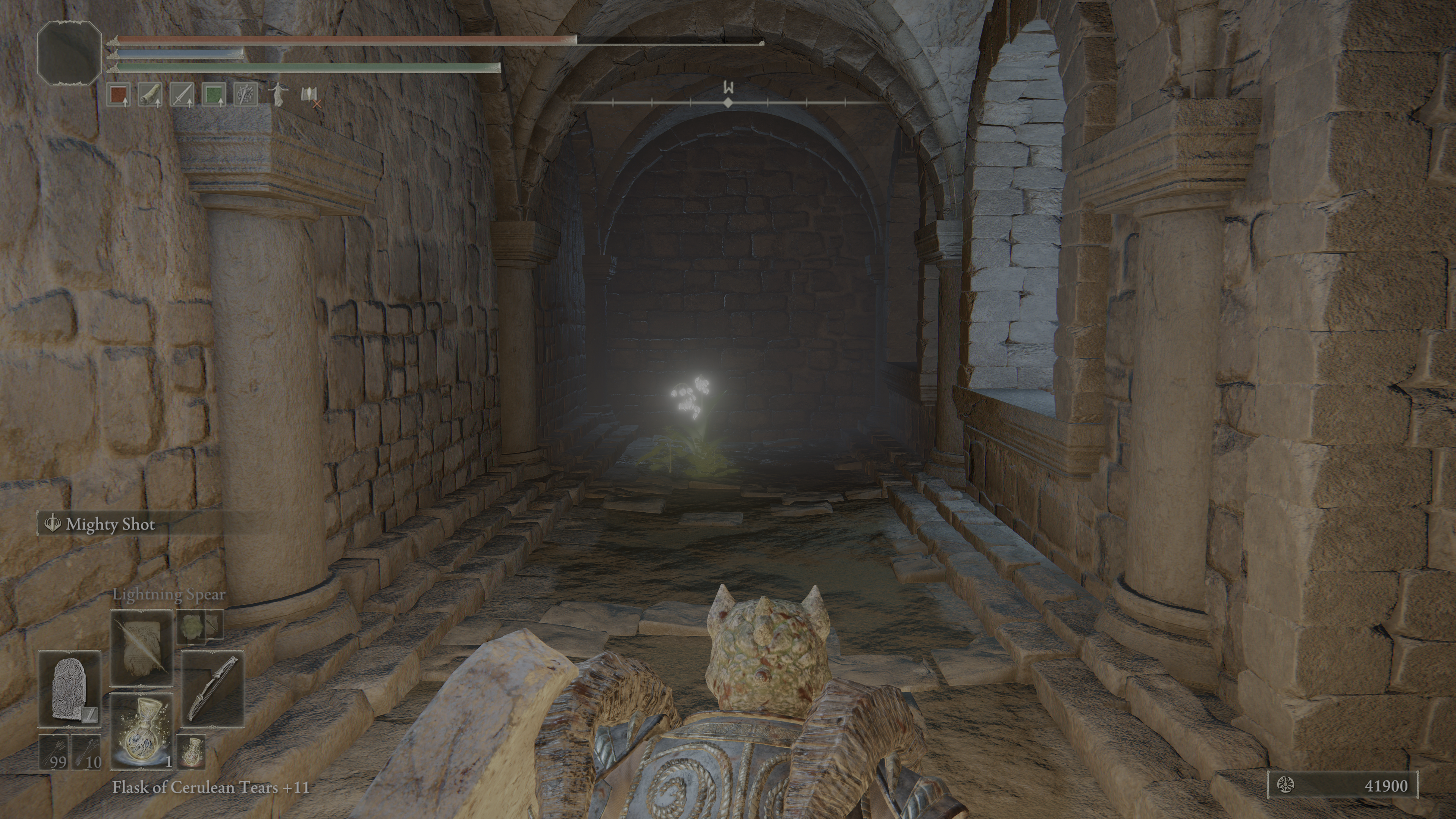 Dispel the wall to find a chest with the Silver Scarab talisman. After taking the loot, look through the alcove's doorway and you should see another alcove straight across. You can walk along the invisible pathway to get to it but note that the pathway is not completely straight so adjust slightly to the left as you approach the central pillars so that you are right in the middle of them. 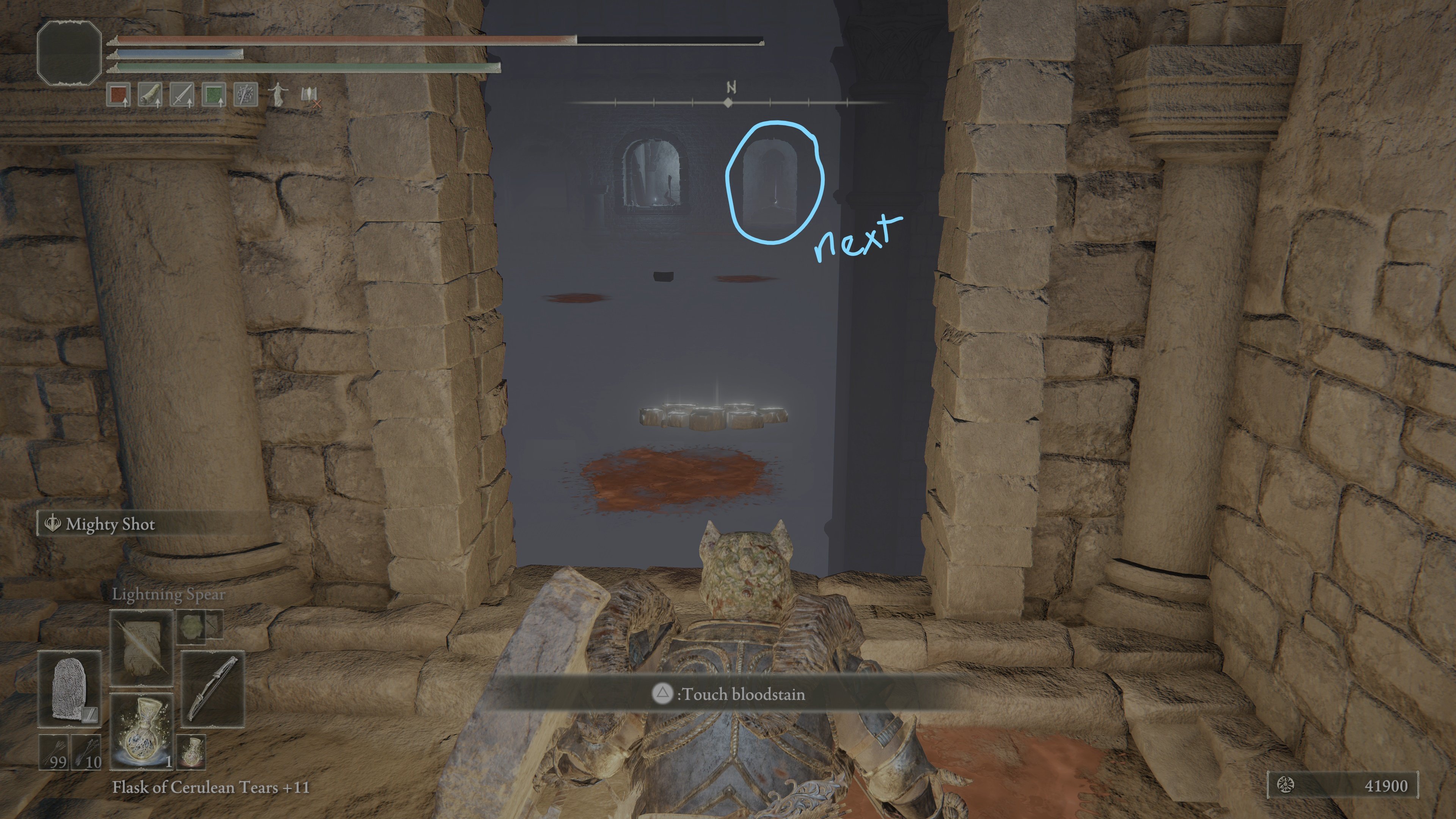 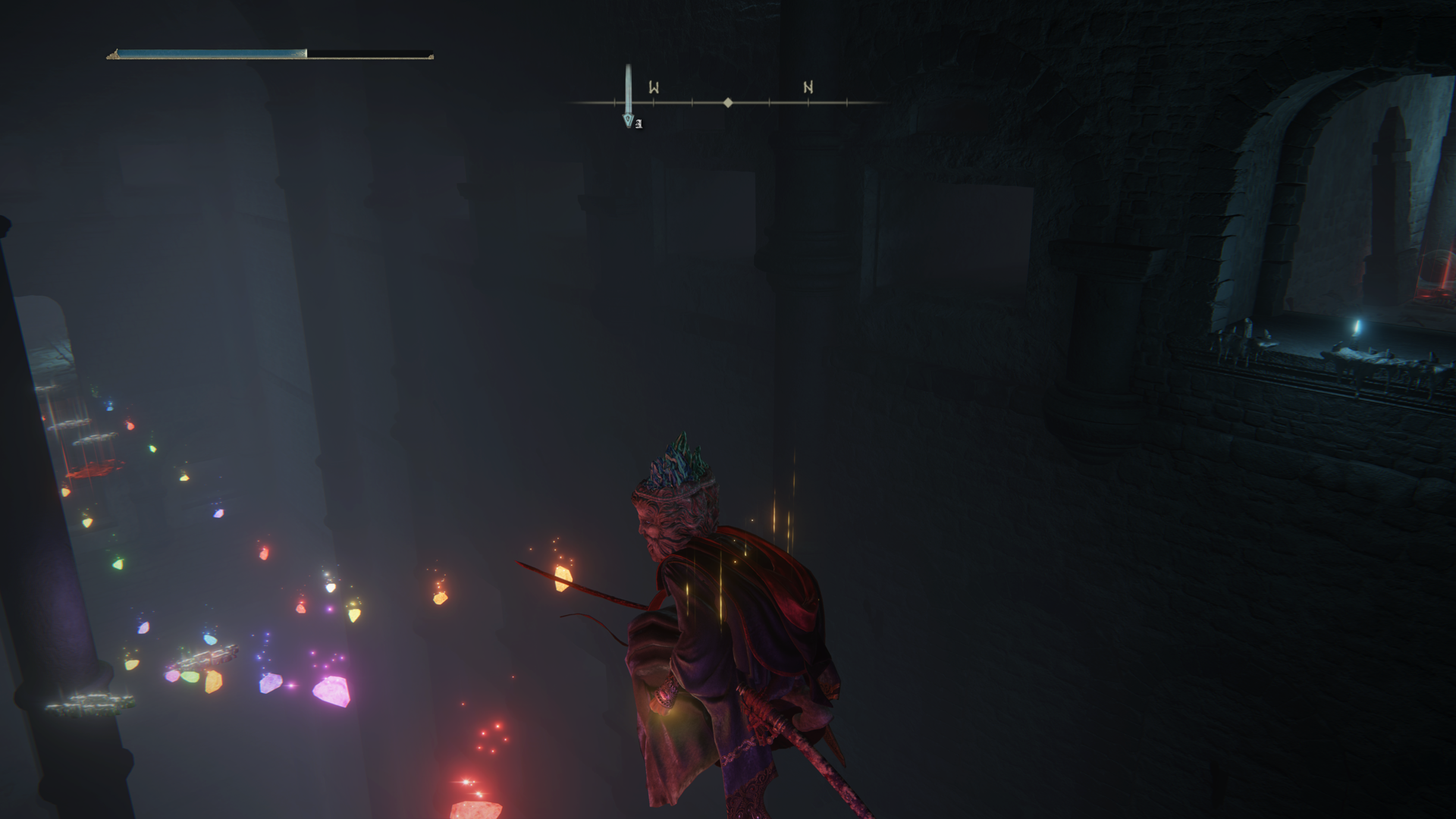 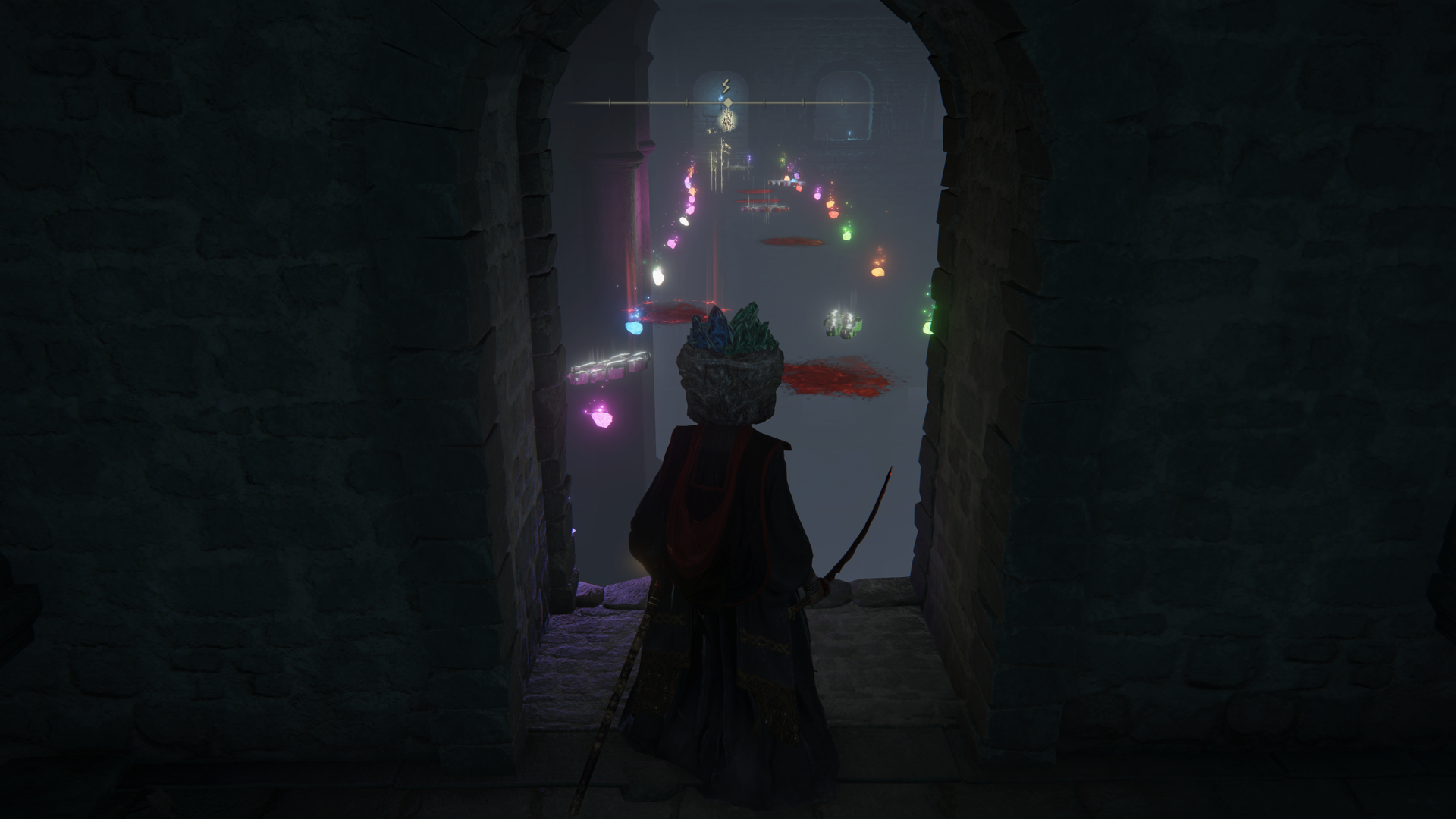 If you are having trouble finding your way, consider using Rainbow Stones or shoot arrows and bolts to mark safe sections to walk on. If playing online, there is likely a lot of player messages and bloodstains that would serve the same purpose. Through the alcove is a small room with a couple of Vulgar Militants and a corpse with 3x Sacramental Bud.  Carefully exit the room and look towards the west where you'll see another doorway in the distance. 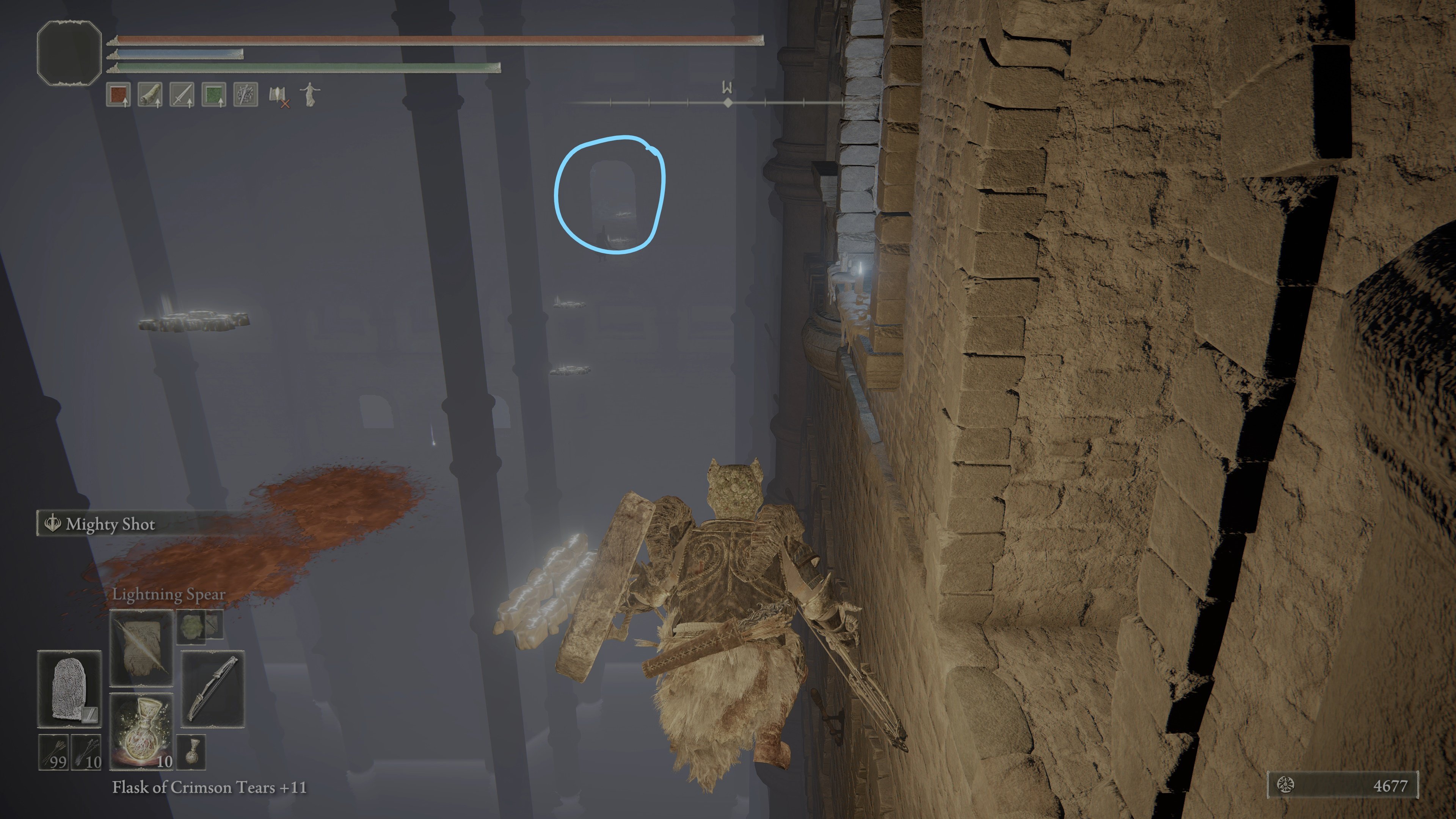 Align yourself with it and walk straight ahead. The path slants downwards slightly. This alcove contains two more Vulgar Militants, with one hiding behind the door frame to the right, waiting to ambush as you pass by. There is another Grave Glovewort (9) by the wall at the end.

Exiting the room, look to your right and you should see a balcony below with a corpse. 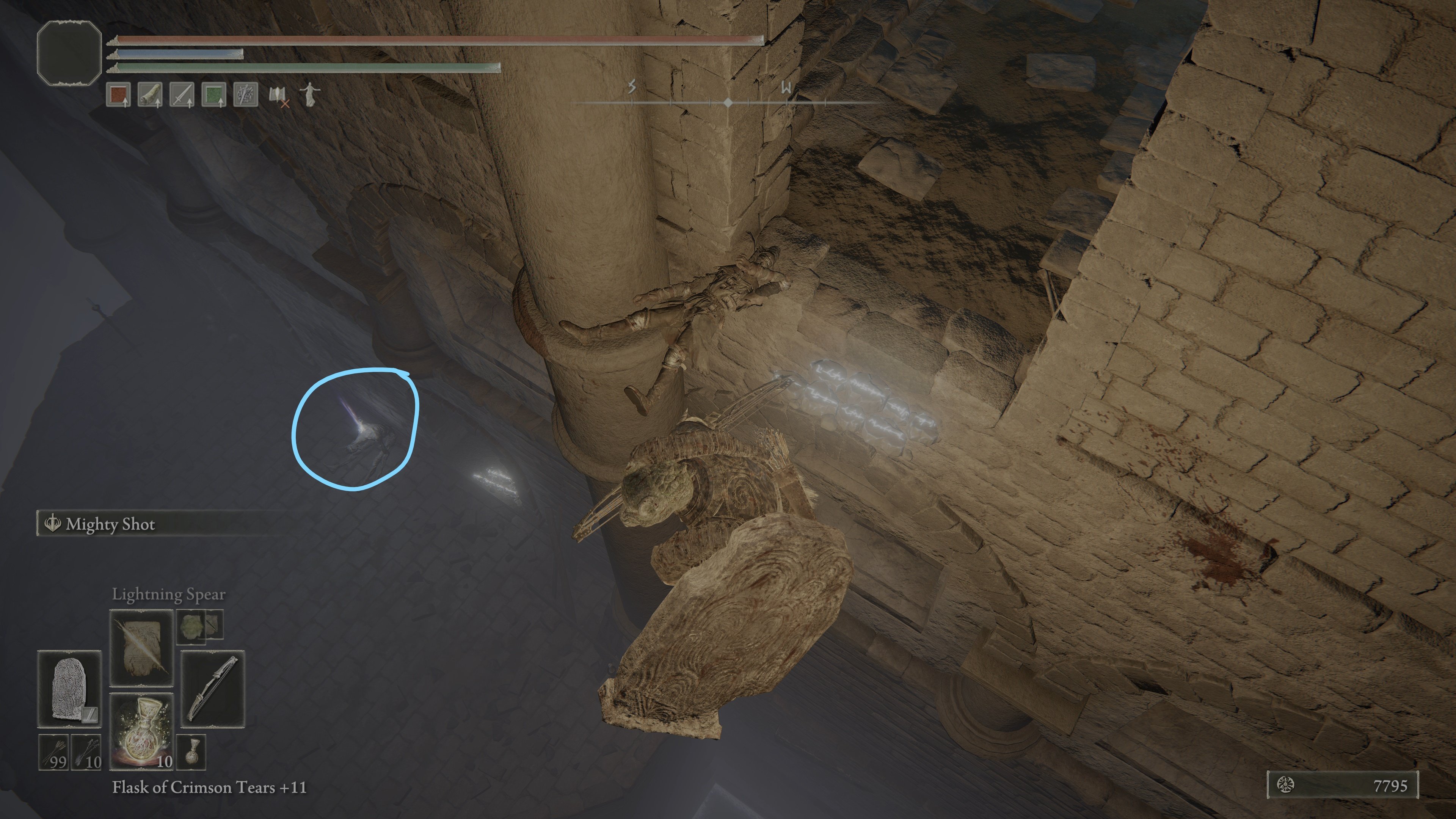 You can simply jump down here from the invisible walkway. Loot the corpse for a Hero's Rune (1). Behind the corpse are two window sills, jump onto one of them, and if you have ranged attacks, you can safely take out the Giant Land Octopus hovering above the next room, as well as the Vulgar Militants below it.  On the north side of the wall, underneath a statue, is a lever. Pull it to open a boss door. 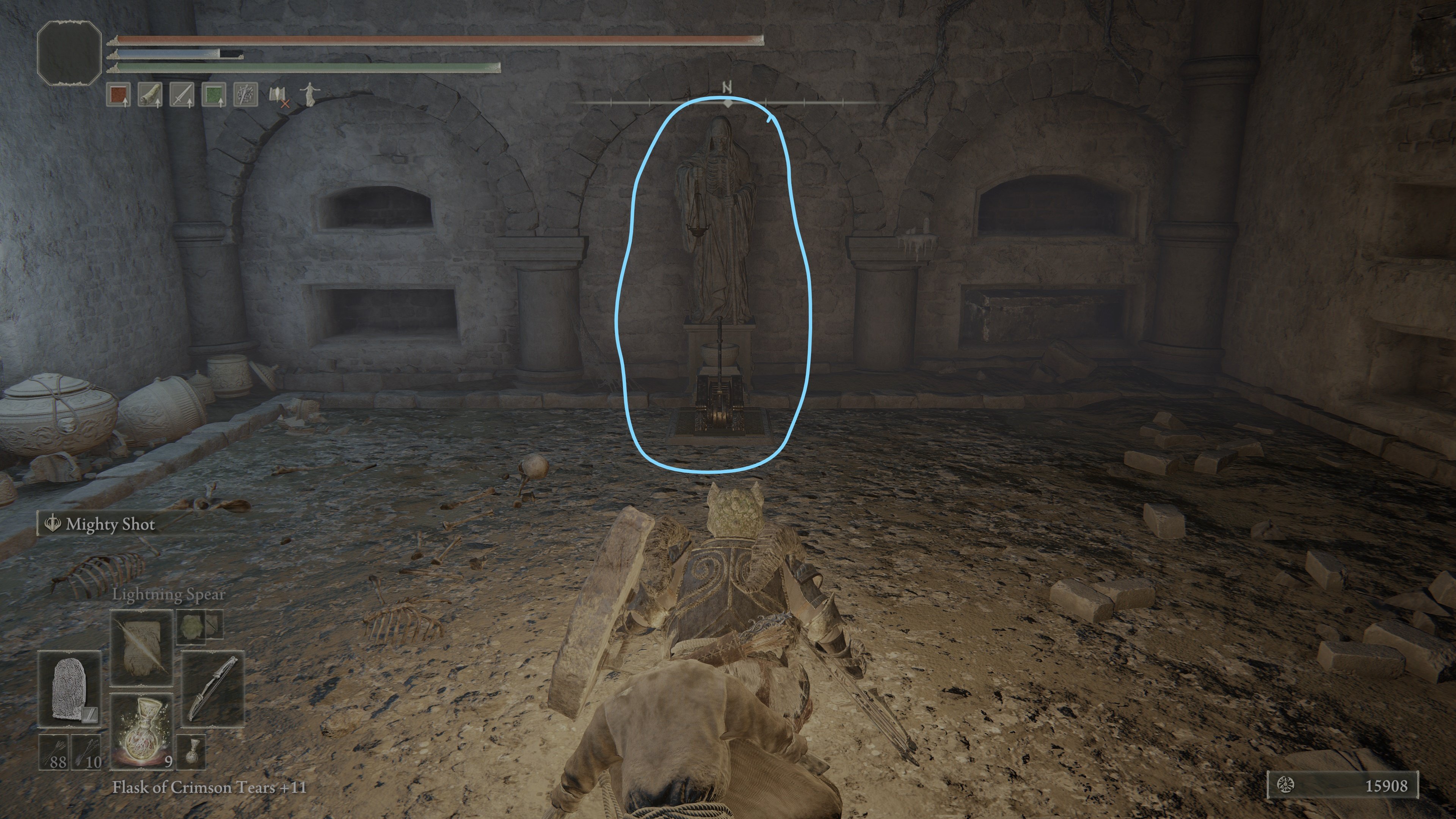 Then, turn around and head south down to the stairs. There are 6 Land Octopuses at the foot of the steps. There is a room behind the steps with several Vulgar Militants as well.. Leave the room and head through the narrow hallway opposite to find the boss room. There is a Stakes of Marika here, so you are fairly safe. Before entering the boss room, turn right and follow the corridor up to find a lift. Take it all the way up and check the corpse in the alcove for the upgraded Spelldrake Talisman +2. Head back down the lift and back to the boss door.

The boss is the Stray Mimic Tear which shouldn't pose too much trouble, especially if you are using sorcery or incantations. It drops Blackflame Monk Amon spirit ashes. There is also a chest in the back with a Deathroot inside.. Either use the teleporter or exit the room and take the elevator on your left to leave the area and enter the Consecrated Snowfield.

Elden Ring Hidden Path to the Haligtree Gallery and Notes 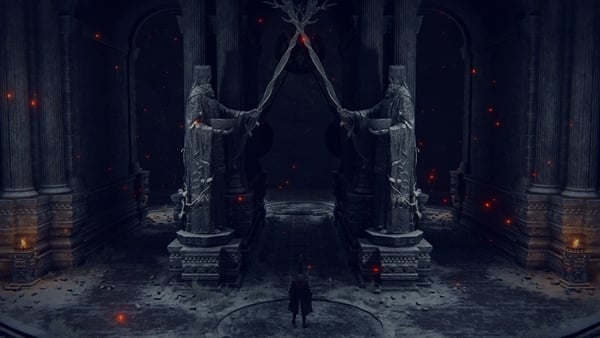