Sealed Tunnel is a Location in Elden Ring. The Sealed Tunnel is found in Capital Outskirts. Down at south of the lake right next to the west gate to Leyndell Royal Capital from the outside. 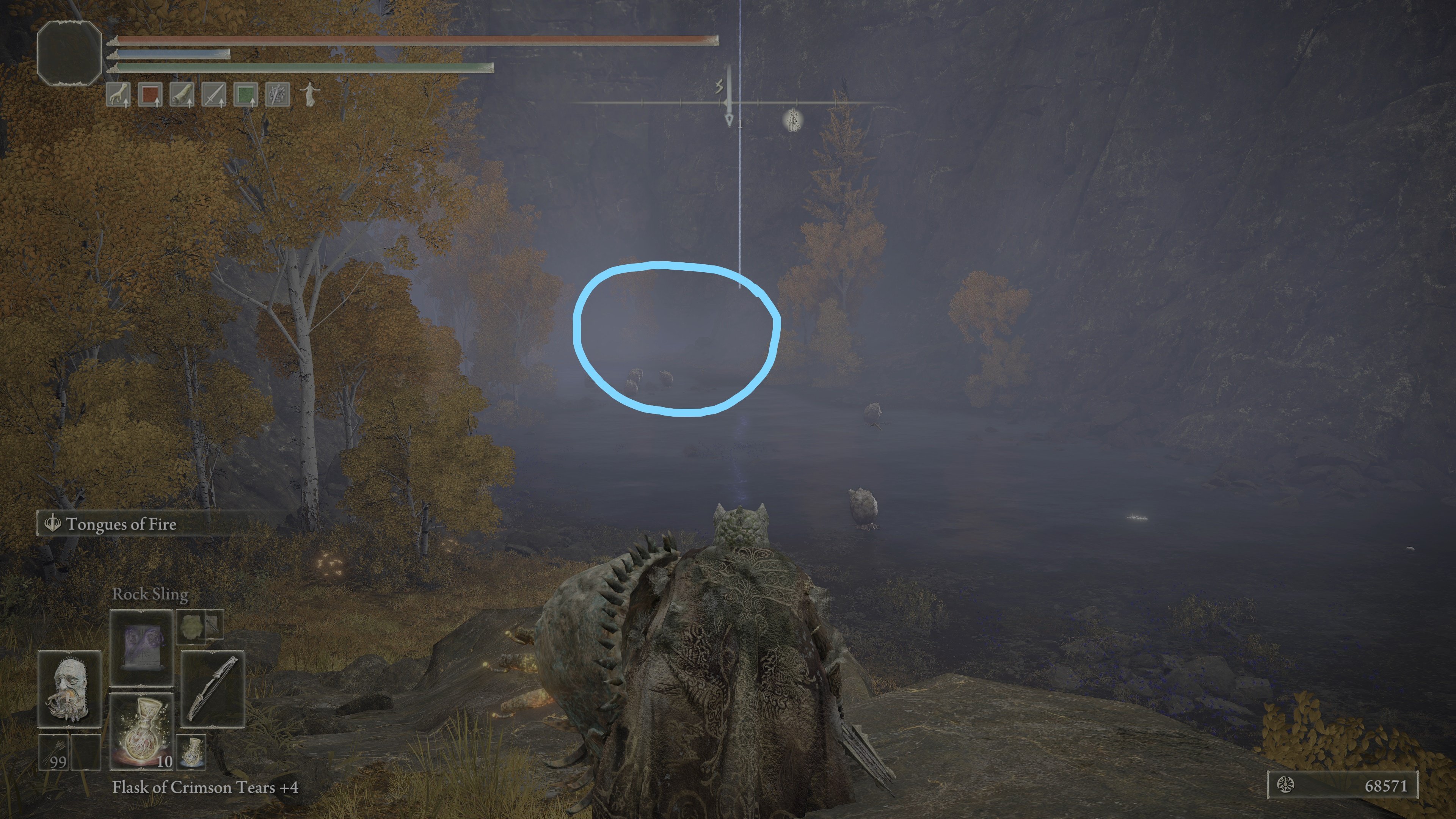 A series of Hidden Walls Leads to the Divine Tower of West Altus. 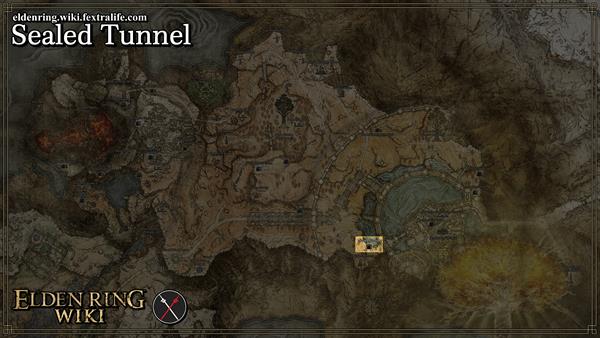 All NPCs and Merchants in Sealed Tunnel

There are no NPCs or merchants here.

Even though it looks like a "Sealed" Tunnel as its name says, there's a cavity that will open a secret path if you attack it. 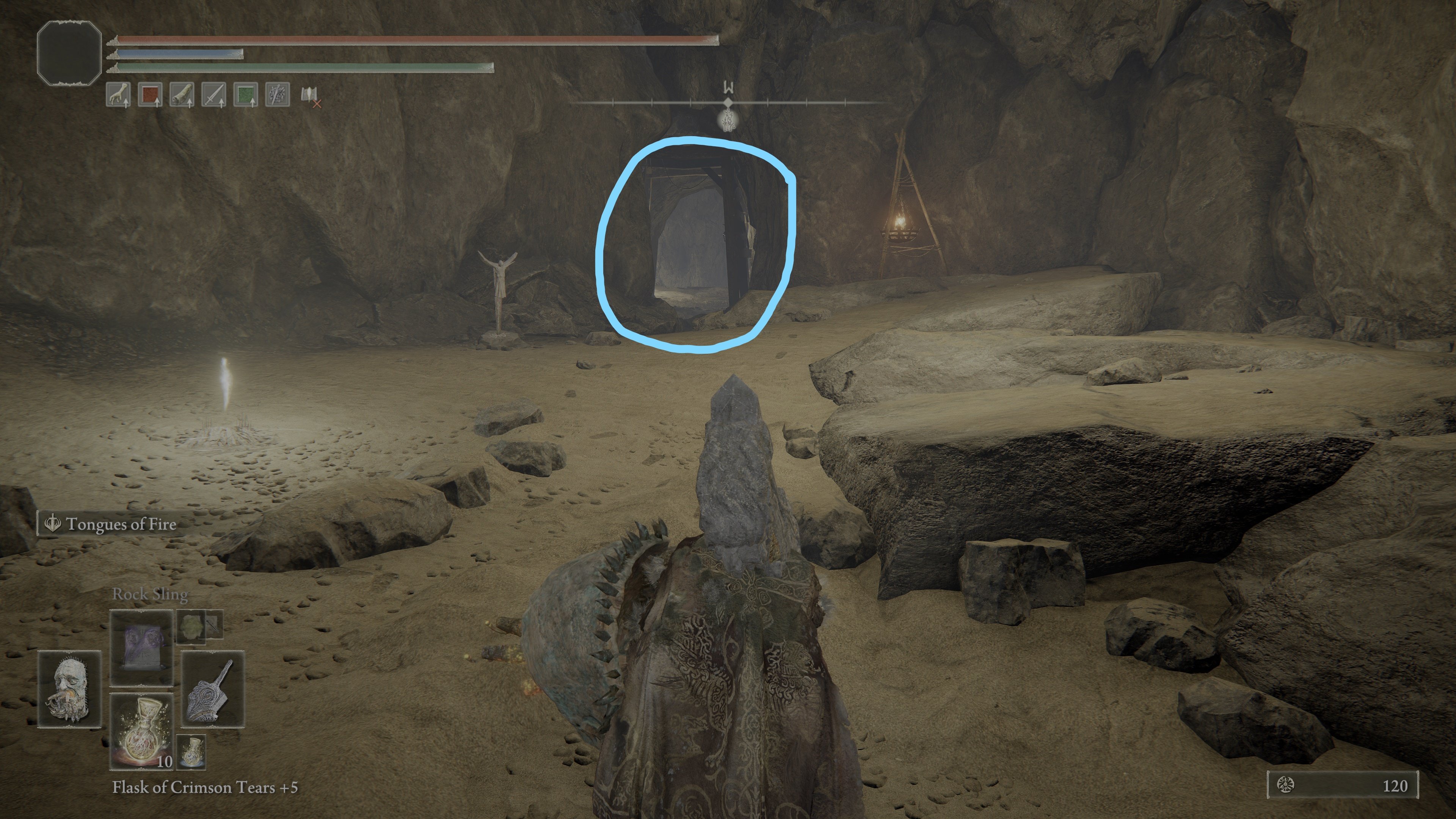 There are many Miners that can be easily surprised as they are working. The mine keeps hiding paths, the second one is behind the chest that contains Smithing-Stone Miner's Bell Bearing (2). 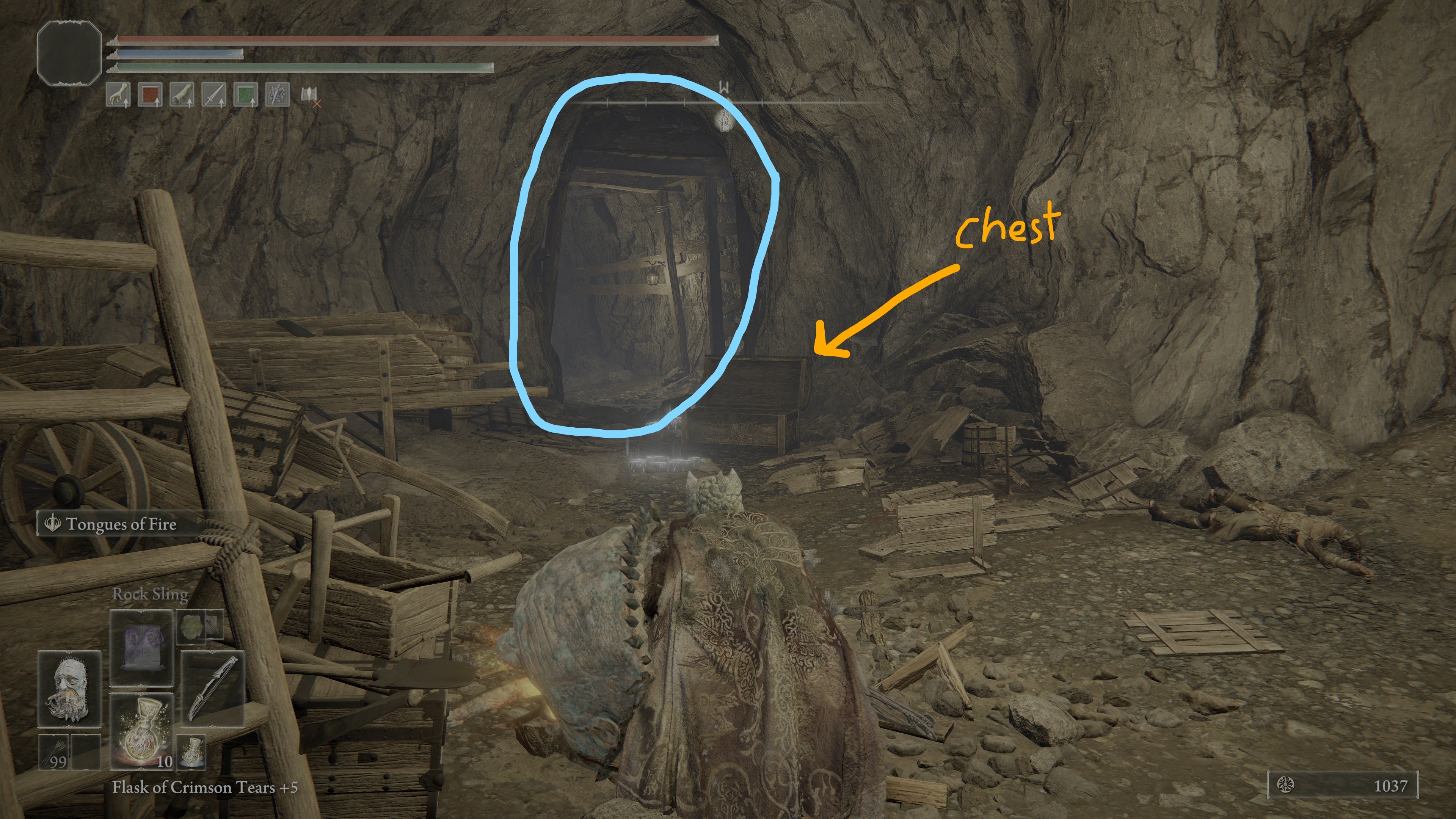 You will find an elevator right after that and you will notice when you go down, that there are some areas to discover middle way down. It's very safe to jump of those areas, as you can jump your way down whenever you need to return to the main way, as there are some platforms and wooden structures that will ease the fall.

Once down, at the end of the path, there's another illusory wall, followed by another one with a Golden Rune (5) in front of it. 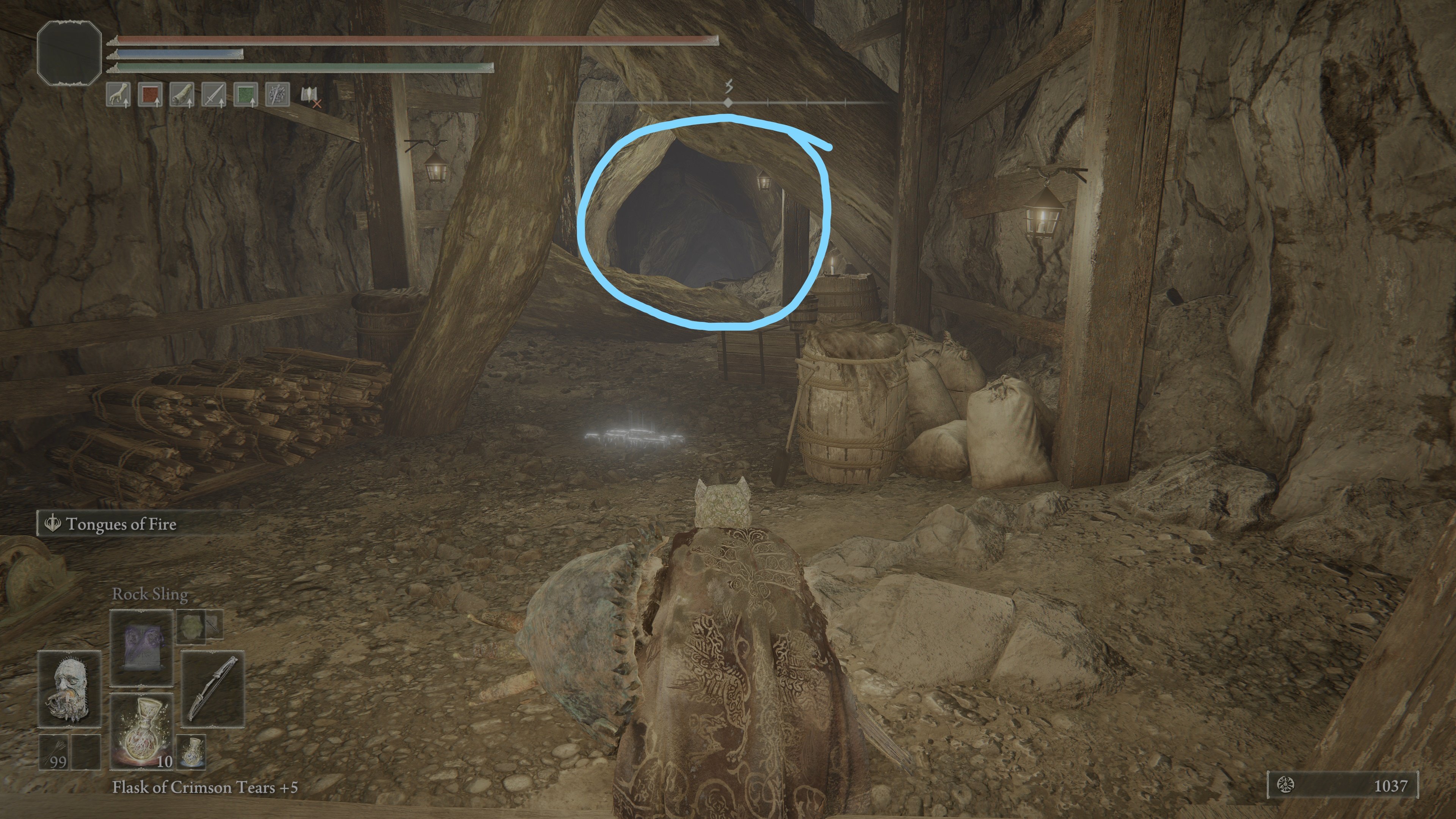 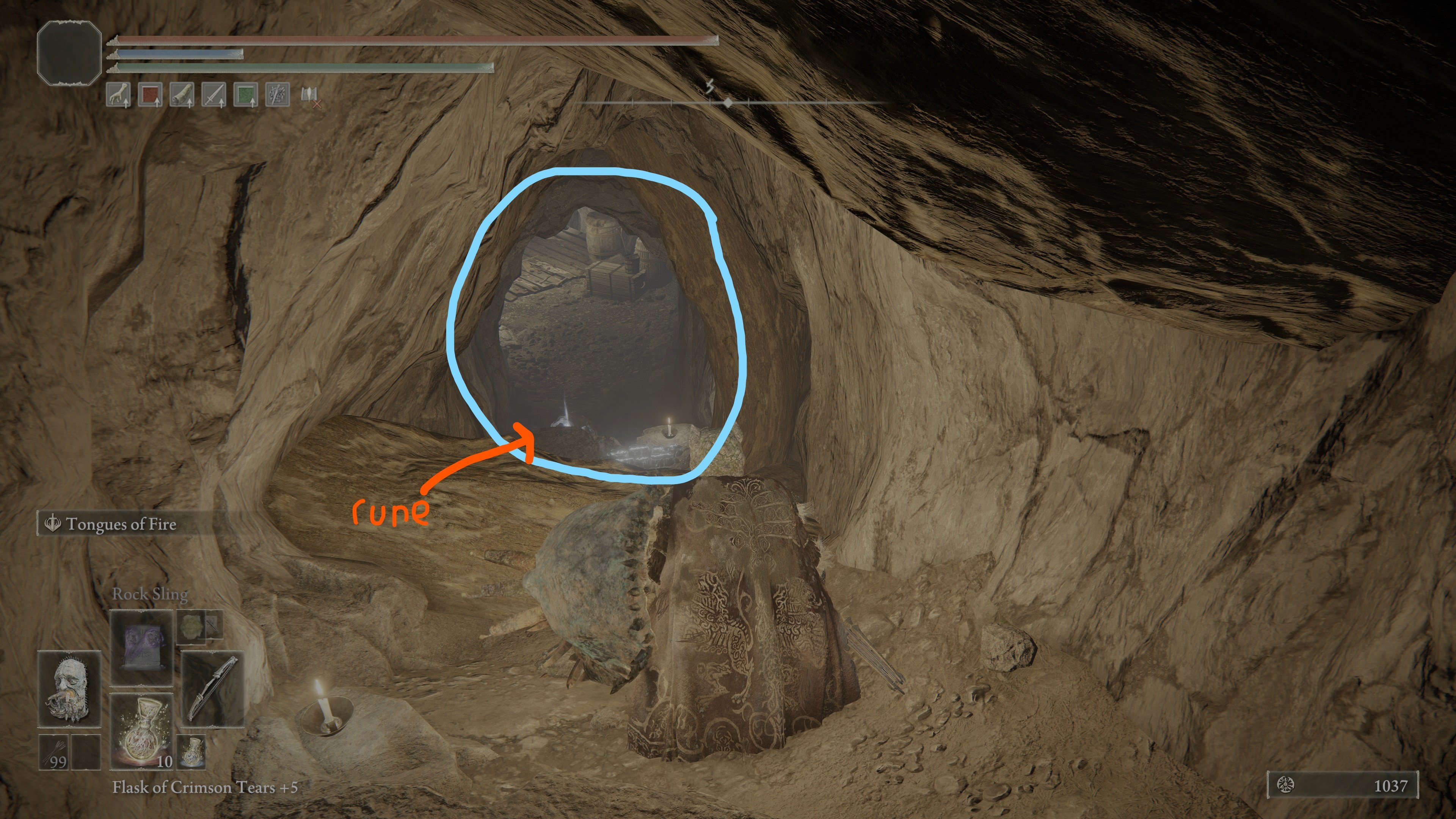 This next area is much bigger. Try to stay up on the wooden platforms and take out the enemies there, in the pit below there is an Abductor Virgin waiting. There is a path to the right containing a Stonesword Key. On the roots going across there is a Gold-Pickled Fowl Foot. In the pit below, try to lure out the abductor virgin to break the statue which contains three Smithing Stones (6). There is also a Rune Arc, Golden Rune (1), three Furlcalling Finger Remedy, and a Somber Smithing Stone (5) on the wall.

After collecting the items in the pit, return up the ladder & proceed across the roots to the far wall. Walk forward to a low root blocking your path & drop down to the right & be wary of two exploding Abnormal Stone Clusters at the landing site. The surrounding room is filled with multiple other exploding clusters & a few items that can be collected.

At the very end of the path, there's a Abnormal Stone Cluster ready to explode behind some debris, in a very dark cavity. Behind it there's another illusory wall. 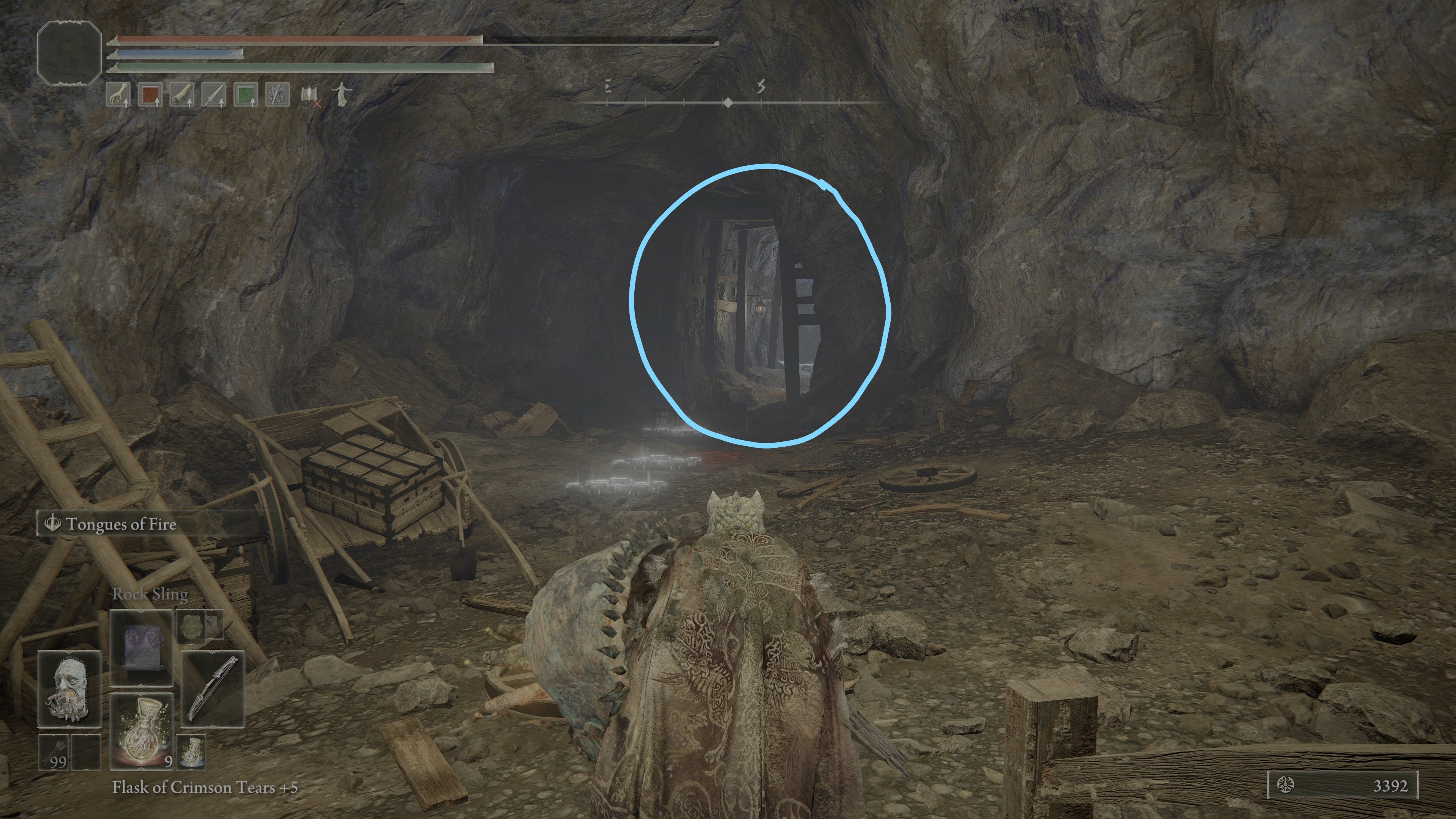 Follow through and climb over the roots do reach another area to drop down.  Be careful and keep easing your fall by falling short distances. As you fall watch for a smithing stone item on the wall, & a Lightning Grease on a corpse next to a large root. Be wary that the landing site holds another group of exploding stones so be ready to roll when landing. Once you have reached the bottom, you will see another corpse with a golden rune & an arena that contains the boss fight against Onyx Lord who drops the Onyx Lord's Greatsword.

In the next area you are able to see the sky again but the path is still linear. Here you'll find the next Site of Grace and the entrance to the Divine Tower of West Altus.