Siofra River is a Location in Elden Ring. This underground region can be reached by taking the lift at either the Siofra River Well in Limgrave or Deep Siofra Well in Caelid.

Two great rivers flow beneath the Lands Between, the Siofra and the Ainsel. This vast region is said to be the grave of civilizations that flourished before the Erdtree. 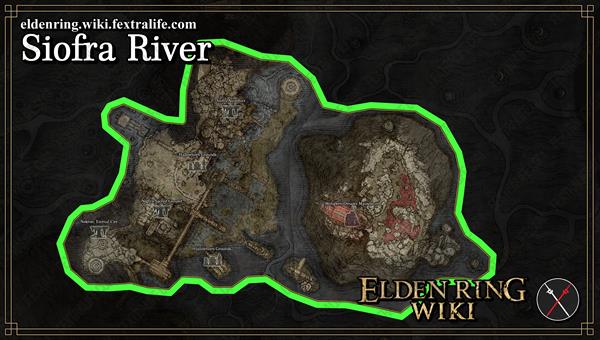 All NPCs and Merchants in Siofra River

The first time you enter Siofra River is likely by taking the lift down the Siofra River Well in Mistwood. This area is intended for higher levels (50 - 60), with upgrades of +8 and above.

Right at the bottom, you'll find the Siofra River Well Depths Site of Grace and the area here can be looted for two Ghost Glovewort (1), a Smithing Stone (4), and a Furlcalling Finger Remedy. The ruin ahead and the cavern areas here are infested with Claymen. They move slowly but be careful when dealing with them in large numbers as they can easily swarm you. In the building and waterfall area here, you can find a Smithing Stone (2), two Smithing Stone (4), and a Ghost Glovewort (1). You can also scale the ruins to get to a Teardrop Scarab that drops Oracle Bubbles. Head into the intact building next to the waterfall area and you'll get taken up to the main section of Siofra River.

Walking forward, you'll eventually get to the Siofra River Bank Site of Grace. Directly east of this Site of Grace, you'll see a pillar with a brazier you can light up. This pillar is one of eight, and all of them are required to be lit to access the Ancestor Spirit boss fight. You can find the coordinates of all 8 pillars on our interactive map in the notes section below. Slightly south from this first pillar, you'll see a large temple ruin. That's the Hallowhorn Grounds and after you've lit all eight pillars, you can interact with the deer carcass inside to take you to the Ancestor Spirit. Make your way to the temple ruin to grab the Map (Siofra River) from the bottom of the staircase. You'll also find a Ghost Glovewort (2) here and the Horn Bow on the supporting structure underneath the Hallowhorn Grounds staircase.

With the map-making navigation easier, backtrack back to the Siofra River Bank Site of Grace and scale the cliff to the southwest to find the Inverted Hawk Heater Shield.  The Armorer's Cookbook (6) can be found on a corpse west of the Siofra River Bank Site of Grace. The waygate here in the south [Elden Ring Map Link] just makes traveling to the northeastern side of Siofra River quicker but doesn't take you to any place inaccessible by foot. In the water-filled area to the northeast of this Site of Grace, you can find many upgrade materials, including a Somber Smithing Stone (2), Smithing Stone (2), and Ghost Glovewort (2). Besides these, you can also find a Furlcalling Finger Remedy within a group of Land Octopuses and a Smithing Stone (4) in a room occupied by a Giant Poison Flower. You'll find a Nomadic Merchant on the level above this room and can get to him by scaling the scaffolding just to the east.

Backtrack back to the cliffs east of the Hallowhorn Grounds and if you've started Blaidd or Ranni's quest, you'll be able to find and talk to Blaidd by the cliff's edge [Elden Ring Map Link]. East of him, you'll find a pillar of wind that Torrent can use to boost him up onto the ruins nearby. Parkour your way to the end and you'll find a Ghost Glovewort (3) and a Stonesword Key. In the distance, you may be able to see another unreachable ruin to the southeast. You can get there by taking one of the waygates at The Four Belfries. In that ruin, you'll be able to find a Ghost Glovewort (2) and Mottled Necklace.

From here, scaling the cliffs get scarier as Ancestral Followers with bows and arrows can and will snipe you. Always try to break line of sight of them whenever possible and use the terrain to your advantage to block incoming projectiles. While heading north, there will be a detour you can take to the west where you can find a Golden Seed and a wall ruin you can scale for a Stonesword Key. Follow along the cliff to the north, and you'll come to a small cave behind waterfall. Inside you'll find Rune Arc. Head back off of the detour and continue heading north, where you'll eventually get to the Below the Well Site of Grace. Slightly north will be a Ghost Glovewort (3) and to the east is a staircase with the Clarifying Horn Charm. The staircase leads you to a lift that takes you back up to the surface at Deep Siofra Well in Caelid.

Head back to that eastern waygate we took note of earlier [Elden Ring Map Link], and it'll teleport you to the northwestern section of the Siofra River, on a cliff above the waterfall here. Immediately to the north is the Dragonkin Soldier, who you can defeat for the Dragon Halberd, and next to him, under a waterfall is the Marika's Scarseal.

South of the Dragonkin Soldier, in a little ruin, is a bunch of Claymen, a Somber Smithing Stone (5), and a Teardrop Scarab that drops the Great Oracular Bubble. Outside the ruin (southwest of the Dragonkin Soldier's original position), tucked in a little corner, you can find a Ghost Glovewort (5). Head back to the spot you teleported to originally, and jump down the ledge here to get to the top of a waterfall. Here you'll find a Ghost Glovewort (4) and the path to get back down safely.

By exploring (and taking a peek at the interactive map using the coordinates below), you should have found all eight pillars that you needed to light up for a boss fight. Head back to the Hallowhorn Grounds and touch the now glowing deer carcass at the very end to get teleported to the Ancestor Spirit fog door. After defeating it, you'll be rewarded with the Ancestral Follower Ashes.

You may have seen buildings and ruins in the sky here and wondered if those areas can be explored. The answer to that is yes! Those buildings are part of Nokron, Eternal City but can only be reached after defeating Starscourge Radahn.

The Ancestor Spirit boss can only be fought if all pillars in the area are interacted with. They are:

After lighting all 8 pillars, you'll see a popup that says "Powers gathers somewhere in horned remains". 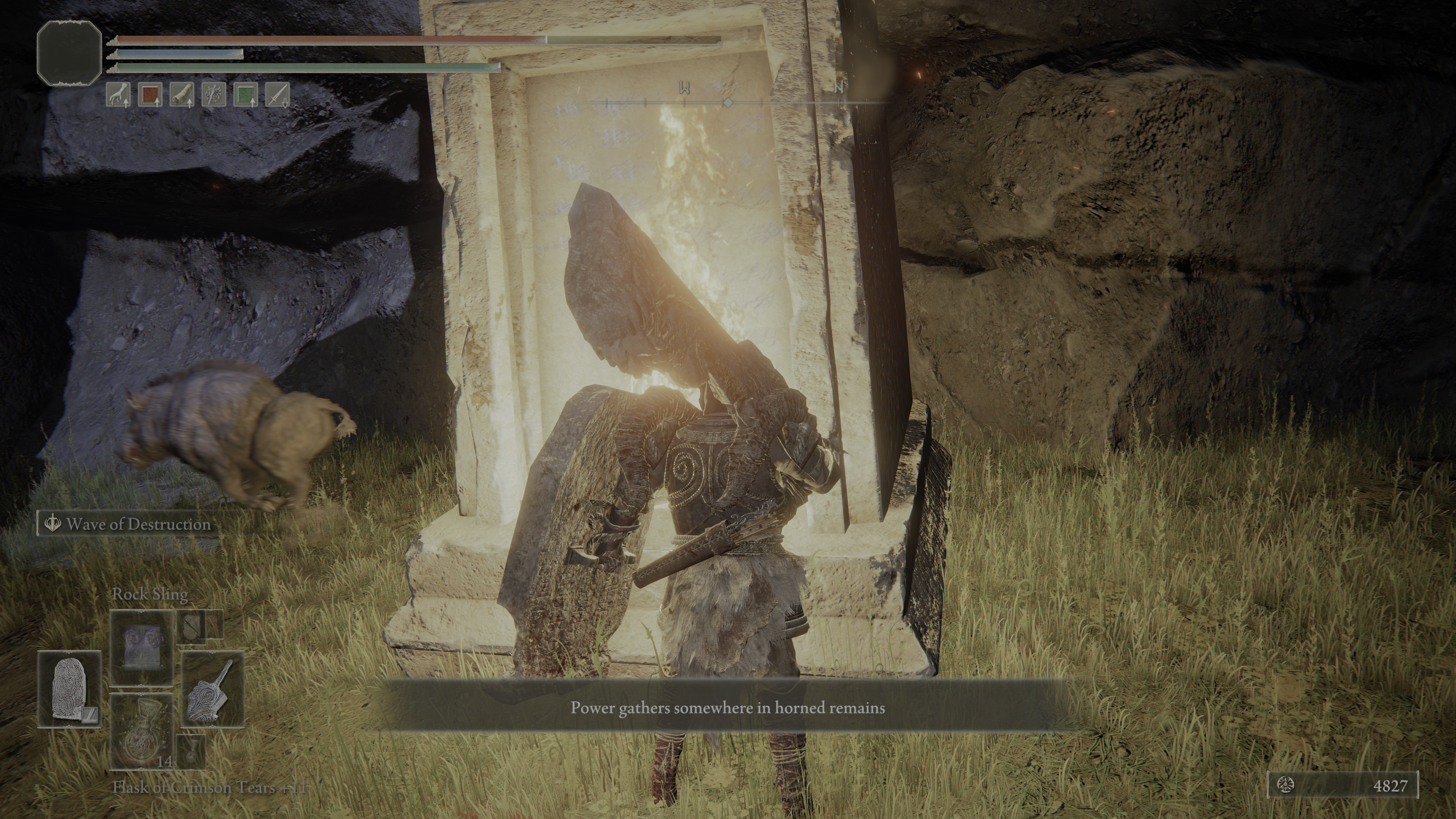