The Fingercreeper is a type of Wildlife Creature in Elden Ring. Fingercreepers are grotesque creatures comprised of gigantic disembodied hands, grafted together and given life. Their behavior and method of traversal are highly reminiscent of a spider.

Extremely grotesque creatures resembling malformed hands with many fingers. They often lie in wait, crushing victims as they pass by, and can fire immobilizing projectiles from the ring on their finger.

Fingercreepers can be found in the following locations: 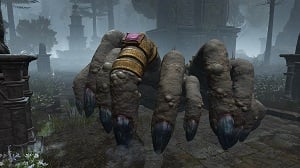