The five greatest warriors of Fia, the Deathbed Companion. They each come in waves, and wield various weapons of their choosing.

Fia's Champions is a group of Invading NPC's found in Deeproot Depths.

Fia's Champions can be found in Deeproot Depths, through a tunnel next to the "Across the Roots" site of grace (Found by travelling upwards along buildings and roots found north of the entrance to the depths). The boss only activates upon getting close to the waygate at the opposite side of the large room. See it on the Elden Ring Map here.

The Best Tips for Fia's Champions:

The first two waves should be easy and you can take your time to defeat then without wasting any resources, the last wave is more intense and it may be advised to Summon a Spirit Ally during the third wave to get more room to fight against them. Try to align then so you always attack one at a time and be aware of the space, as the arena becomes much smaller when the invasion begins. Always focus on the most aggresive invader.

It's important not to waste too many resources in the first 2 waves, as the third wave will get more problematic with three enemies attacking you at once. These enemies generally dodge ranged attacks while getting closer to you. It's advised to focus al your damage to one invader at once, until they are defeated and then attack the next one. Because 3 attackers may not leave too much room to attack or move between attacks. Try to spread them apart. 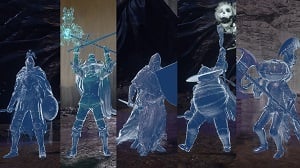